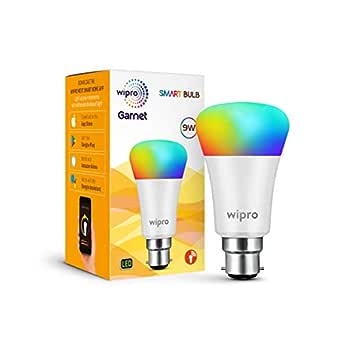 Amazon Delivered
Amazon directly manages delivery for this product. Order delivery tracking to your doorstep is available.
2 Year Warranty
2 Years
In stock.
Sold by Cloudtail India and Fulfilled by Amazon.

Your question might be answered by sellers, manufacturers, or customers who bought this product.

4.1 out of 5 stars
4.1 out of 5
18,524 global ratings
How are ratings calculated?
To calculate the overall star rating and percentage breakdown by star, we don’t use a simple average. Instead, our system considers things like how recent a review is and if the reviewer bought the item on Amazon. It also analyses reviews to verify trustworthiness.

Everything about this product is wrong! Amazon should have a "negative rating system", especially for Indian products, and I would have given this bulb negative-5-stars.

So, I received this bulb around 11:00 am on May 15, 2019. I put it in the socket, and it was glowing continuously like a 5W bulb that you can get for INR 20 (possibly cheaper on Amazon). For the first time in my life, I had to find a "user-manual" and actually read it. Engineers at Wipro obviously do NOT know about QR codes. Or maybe Premji is trying to save INR 0.05 (5 paise) by NOT printing a QR code on the box.

So, I read the manual, downloaded the "Wipro Next Smart Home App" from the Play Store and started it. 1st page: accept our "agreenment" with no text shown!!! I give Wipro negative 5 stars for that. Alright, I accepted the unseen agreement. 2nd page: give us your phone number. Alright I did that too. I waited for 5 minutes to get a "verification SMS" but none showed up! So, I requested a "resend verification code" and the app showed me a message to the effect: you are asking for verification codes too many times, so, wait for a little while!! What the ... was my only thought because I had just waited for 5 minutes to receive a verification code and you, Wipro, never sent me any. After trying it "exactly 5 times" ... I gave up and entered my email address. That was when they sent me the verification code. So, now Wipro has my phone number and my email address so they can send me marketing messages to buy Santoor soap (or whatever they make) and Wipro cooking oil!!

The main reason I wanted to get this bulb was because I want something that will switch off on a schedule. I have gotten into the bad habit of falling asleep with all the lights in my house switched on ... so I figured I would try this bulb ... and if it worked, I was hoping to replace all the other bulbs/tube-lights in my house with similar Wipro bulbs. It should be obvious that the first thing I tried was to set a schedule. It was 12:10 pm, so I figured I would try to switch off the bulb at 12:11 pm. The schedule page clearly says that the schedule will be implemented +/- 30 seconds. I get it ... this is NOT a real time system, and considering that most humans have a 60+ life-spans a few seconds here and there is not a big deal. So, like a small kid looking at his first light bulb, I sat there waiting for the bulb to switch off. The time switched to 12:11 pm ... then 12:12 pm ... then 12:13 pm ... but the bulb wouldn't switch off. I figured 1 minute was "too real time" for this Wipro bulb. So, I set a schedule after 10 minutes. 15 minutes passed, then 20 ... and NOTHING happened!!! The bulb was glowing like an INR 20 5W bulb that you can pick up at your local baniya. I had just made a discovery: THIS WIPRO BULB, that WIPRO claims to be a SMART BULB, is actually NOT a SMART BULB! It is a typical Indian, "let's make a fool out of them" strategy adopted by all Indian companies!

So, by the end of all that waiting, I knew it was time to return the bulb. But, I chose to find out what other "features", if any at all, did this "let's make a fool out of them" SMART BULB from Indian mega-corp "Wipro" had in it. The only real feature was to change colors. And that feature only works "manually!!" So, you have to sit there, with the bulb plugged in, and your "smartphone" with the app installed in your hand ... changing between colors. You would have to be one bored mind to play with the colors on this stupid "NOT AT ALL SMART" bulb from Wipro.

So, by about 12:50 pm I realized I had had enough with this "Indian product" that had just proven that I was a typical Indian willing to be made a fool of by yet another Indian conglomerate.

Bottom line: this is NOT a SMART BULB even though Wipro likes to claim it. This stupid thing was a waste of my time and since I don't hate you ... I would recommend that you don't waste your time on this stupid thing either. Of course, if you just want to experience how Indian companies make a chu... out of Indians ... then you should get this bulb to experience first hand the Indian strategy of "let's make a fool out of them Indians."

Akshay Panday
4.0 out of 5 stars A good way to start a "smart home"
Reviewed in India on 2 November 2018
Pattern: BulbStyle: 7W RGBVerified Purchase
I bought two of these to use in my living room at 999 each.

Pros:
1. The app and devices are much more stable than my Ewelink and Sonoff relays. Never had Alexa say "device is not responding"
2. Breeze to set it up with Alexa
3. The Wipro app itself is quite decent. As others have pointed out it doesn't have many options like "music" to make the lights dance - it doesn't matter to me. Scenes created here are immediately detected by the Alexa app.

Cons:
1. Would have really preferred the white to be warm white
2. Colour rendition is a problem. Everything in the yellow - orange spectrum is greenish. In theory the RGB values mixed together give yellow but here the green diode just overpowers.
Read more
534 people found this helpful
Helpful
Comment Report abuse

manoj tirkey
4.0 out of 5 stars Good product for the price. Set up is geeky.
Reviewed in India on 21 October 2018
Pattern: BulbStyle: 7W RGBVerified Purchase
The product is good. It works most reliably through the Wipro App.

Pros:
1) Price: At Rs. 999 it was the cheapest.
2) The 'Wipro Next Smart Home' App is reliable. It is the best way to change colours.
3.) Works with Google Assistant/Google Home.
4) Unlike some other similar apps, Wipro app consumes very less battery and processing power of your phone.

1) Manual is inadequate: The user manual doesn't have instructions for linking with Google Home App. It only includes instructions for Alexa.
2) Setup is geeky: The service linking the Wipro light to Google is called 'Smart Life'. This causes a bit of confusion as you initially look for something that should be named Wipro. Only when you look deep into the Wipro App that you find the embedded information that 'Smart Life' is the service for linking the light to Google Assistant/Google Home.
Read more

Varun Sharma
5.0 out of 5 stars Works great. Control brightness & colors through app and echo.
Reviewed in India on 1 April 2019
Pattern: BulbStyle: 7W RGBVerified Purchase
This is a very good product. It works absolutely fine with Amazon Echo (I'm using Echo 2nd Gen) and through the app as well.
Setting it up is no rocket science.
You can change the brightness, colors, saturation and turn it on or off through the app or echo device(s).
There are some scenes available on the app, you can select one at a time to activate the pre automated light moods, which is good when there's a party at home (you can also change any scene's timing and add or remove select colors).
Been using three since six months and ordered two more now.
This video shows how you can change the colors through Amazon echo.
Go for it.
Read more
266 people found this helpful
Helpful
Comment Report abuse

Divya
1.0 out of 5 stars FAULTY PRODUCT. NO CUSTOMER SUPPORT.
Reviewed in India on 22 July 2019
Pattern: 12W (RGB+White) BulbStyle: 12W RGBVerified Purchase
I tried to connect through the Wipro Smart Next Home app, but it won't connect through Wi-Fi. I use only 2.4 GHz Hathaway Broadband . Such a difficult setup process and no proper resolution provided in the Wipro website. Lack of Customer support is a huge disappointment.
Read more

Deepankar Kotnala
1.0 out of 5 stars This bulb will never connect to the app!!
Reviewed in India on 9 August 2019
Pattern: 12W (RGB+White) BulbStyle: 12W RGBVerified Purchase
It's just not connecting to my router. I wave literally wasted 1 hour trying to connect this stupid bulb, but it won't connect/ That's the reason why a 12 Watt (so called smart bulb) is being sold at just 899 rs!
(Yes, I do have a 2.4 ghz wifi connection and the bulb is just not connecting!!)

DO NOT BUT THIS BULB!!!!!
Read more
87 people found this helpful
Helpful
Comment Report abuse

Nikhil Madhamshettiwar
2.0 out of 5 stars Doesn't work with google home or IFTTT
Reviewed in India on 29 October 2018
Pattern: BulbStyle: 7W RGBVerified Purchase
Pros
1. Setup is very easy if the light and phone within 2 ft of router.

Cons
1. Was not able to integrate with google home.
2. No applets available on IFTTT
3. Could not find any help pages for integration with Google home or IFTTT even though its mentioned on the box.
4. Instruction manual only mentions Alexa integration.
Read more
90 people found this helpful
Helpful
Comment Report abuse
See all reviews
Unlimited FREE fast delivery, video streaming & more
Prime members enjoy unlimited free, fast delivery on eligible items, video streaming, ad-free music, exclusive access to deals & more.
> Get started
Back to top
Get to Know Us
Connect with Us
Make Money with Us
Let Us Help You
EnglishChoose a language for shopping.
© 1996-2020, Amazon.com, Inc. or its affiliates