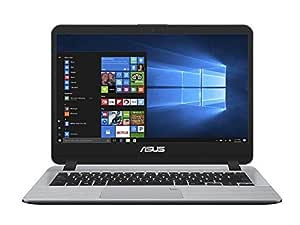 by ASUS
3.4 out of 5 stars 730 ratings
| 659 answered questions
7 Days Replacement
1 Year Warranty
1 Year Warranty
1 year manufacturer warranty
Currently unavailable.
We don't know when or if this item will be back in stock.
Show More
Lowest price ever on JK copier paper

A perfect combination of beauty and performance, the stylish X407 is powered by a 8th Generation Intel Core i5 processor with 8GB RAM. X407 is design so that it weighs just 1.55kg and combine with a 1TB HDD Storage for productivity and entertainment, everyday . It’s the ideal laptop for daily computing and entertainment.

Stay Cool After Hours of Use

Style: i5 8th Gen + 8GB RAM + 1TB HDD | Pattern: Laptop
Technical Details
Additional Information
Warranty & Support
Warranty Details: 1 year manufacturer warranty
Feedback
Would you like to tell us about a lower price?
If you are a seller for this product, would you like to suggest updates through seller support?
Customer Questions & Answers
See questions and answers

3.4 out of 5 stars
3.4 out of 5
730 customer ratings
How does Amazon calculate star ratings?
Amazon calculates a product's star ratings based on a machine learned model instead of a raw data average. The model takes into account factors including the age of a rating, whether the ratings are from verified purchasers and factors that establish reviewer trustworthiness.

Amazon Customer
1.0 out of 5 stars Not recommended at all
Reviewed in India on 9 January 2019
Style name: i3 7th Gen + 4GB RAM + 1TB HDDPattern name: LaptopVerified Purchase
I generally do not write reviews. After buying so many things on Amazon I am forced to say that it is the worst thing that I have brought here. This product does not serve the purpose neither it is up to the mark as mentioned in the product description mentioned when I ordered. It's not even been 4 months and I have got it serviced once and now after that it still so so slow. I am not sure how Asus tagline says "in search of incredible"". I won't recommend to anyone.
Read more

Cons:-
- slow performance. Dont expect a window to open immediately after clicking. But the good news is that this laptop has an m.2 ssd slot. So I separately bought an ssd for 2k which their service center guys happily installed free of charge. After the ssd upgrade for 2k the laptop is very fast. Boots up in 8 seconds max.
- sound volume is a little low so dont expect to watch movies with family without external speakers

Overall, it's an excellent product for daily use. I researched Dell, HP and Lenovo laptops before buying this. None give this good a deal. No one gives Windows Licensed copy at <23k price range.

Not suitable for processor intensive work though.

AKASH PADHI
5.0 out of 5 stars My choice is ASUS...bcz it’s best budget laptop ever
Reviewed in India on 12 November 2018
Style name: i3 7th Gen + 4GB RAM + 1TB HDDPattern name: LaptopVerified Purchase
All good. It’s not a super computer but has it’s performance Nd works pretty well. I was beat confused before buying if amazon will deliver a good one or not. But when I got it and used it I m happy and fine with its performance and loved its compactness. So guys if u want a budget laptop under 30 k with good configurations than this laptop is for u. ASUS has done a fabulous job for budget laptops. I will recommend u guys go for it bcz it has a nice handy compact design with 14 inch screen and a fingerprint scanner which makes it perfect. Apart from that it has a fast charging battery which completes its full charge less than 1 hr. Woh aur kya chahiye. 4 saal chal jaye to bauhot he yaaar. I like it after using Lenovo for more 6 yrs . So guys don’t worry buy it if u have a plan to purchase a budget laptop under 30 k . Bcz this model is not available on market, it’s an online model. Thanks I hope u do well guys.
Read more

Charan Pinapati
4.0 out of 5 stars Asus Laptop full Review
Reviewed in India on 15 March 2019
Style name: i5 8th Gen + 4GB RAM + 16GB Optane + 1TB HDDPattern name: LaptopVerified Purchase
1) Product is good
2) Delivery by Amazon was too good
3)Product I received was in good packaging and no signs of wear and tear .Excellent at all
4) DISPLAY
Display was good and natural colour display ,looking good
5) Battery life is very good though it has a 3 cell battery
6)product was light weight and easy to handle
If anywhere to go
7)Overall Nice and cool laptop

Conditions: Products in Amazon.in was good if only it was fulfilled by Amazon
Go only for Amazon fulfilled Products and seller star rating above 4.0
Read more

Anonymous User
1.0 out of 5 stars Bluetooth stopped working
Reviewed in India on 19 November 2018
Style name: i5 8th Gen + 8GB RAM + 256GB SSDPattern name: LaptopVerified Purchase
I have been using this for the better part of the past four hours.

I am a Mac / Apple product user, and therefore, my review will be comparative. It might also seem biased.

1. Build - the product is mostly plastic and often gives this wobbly clackety vibe when you are furiously typing away on the keyboard. The backspace key especially has its unique vibrato sound :-)
2. Keyboard - refer (1). Also, the keyboard has a clackety sound that may or may not appeal to some. As others have pointed out all over the internet, it is a real shame that the caps lock key does not have a light to show when it is on. This is particularly irritating when you are typing a password, and you cannot figure out why the password was rejected
3. Battery - seems to be holding on - took forever to charge from 70% to 100% (approximately 3 hours). But to be objective, I was working on the laptop all the time while the battery was recharged. Recommend you stick to the halfway mark on the battery optimisation setting (Better performance) instead of either extreme. The lower end tends to result in CPU stuttering. The higher-end means the battery will wear itself out fast.
4. Form - the product looks good, it is all plastic of course, or at least most of the outer shell is. But it looks good, and it is light.
5. Display - the display is good enough, Windows recommends 150% on the size of fonts to avoid the blurry effect. I stuck to the recommended size. I was not hung up on how good the display looks; I got this as a backup for my Mac and test runs.
6. Processor - the processor, is good, and it shows when you run some complex code. Surprisingly, the keyboard does not get hot for a processor that is reasonably powerful compared to the MBA I have used before.
7. RAM - you should be OK if you are using this only for documentation, browsing and emails and the processor hold up well considering it is only a generation behind the newest 9th generation. I write code as well, but I am a fan of Emacs and the command line and boot into an alternate OS, so the bulk of the graphical processing that eats away memory and processor is not a problem.
8. Sound - this is an absolute downer. If I could rate sound quality separately, I would estimate that a zero. The speakers are abominable. Headphone sound quality is marginally better.
9. The software - there is a lot of stuff in there I do not need. I uninstalled all of the graphic software and MS-Office (which was not activated). I uninstalled some OEM bloatware as well while retaining the support tool. The initial OS boot and setup takes its sweet time. And after the first setup, there is the whole patch-and-update cycle with at least two additional reboots. Once that is through, and you have a hang of what you need to use often, you can set the battery optimisation, and you are good to go.

Summary - for the price, this is the best that I could think of, and I spent a week looking up what I needed. I am sure there are others out there, but I had to think of my price cap and the need to have a device I could lug around instead of a massive 2.5kg powerhouse.

PS: the power adaptor is light too.

With a little care and some attention to how you carry it around and the occasional servicing, this should serve its purpose.

a) So the CAPSLOCK issue can be partly mitigated by software using the Control Panel > Ease of Use, which has a toggle setting that plays two entirely different sounds for the ON and OFF setting. I am not entirely sure this is an accessibility friendly setting (those who are aurally challenged). But it is still a better alternative than figuring out after entering a password with the CAPSLOCK accidentally on three times only to have your account disabled!

b) The HDMI streaming mechanism is pretty nifty, and although the windows were not perfectly aligned on the television set, using Ctrl-Alt-F11 puts it all in order. The upside is I can work without having to stick my glasses on.

c) The battery optimisation software is excellent. ASUSTek's own OEM software allows you to decide at what point to stop charging with three settings - so you do not have to kill the battery by keeping it charging past 100%. The capacity of the battery is functional too. With HDMI streaming, remote desktop, three USB external drives, I still get a good 2 hours from the battery when it is discharging from 60%.

d) The maximum RAM capacity is only 16 GB (the product ships with 8 GB out of the box). The service centre does not pick up calls for an appointment. The ASUS call-centre is vague about how warranty is impacted by an upgrade from 8 GB to 16 GB. I am hoping this is not indicative of ASUS after-sales support in general.

Bluetooth is not working any longer, and this is not Windows-specific. Even booting into Linux tells me the Bluetooth radio is non-functional. I suspect this is a hardware fault. So at this time, my ability to use this computer is severely handicapped
Read more
48 people found this helpful
Helpful
Comment Report abuse

Uddhab Biswas
5.0 out of 5 stars Excellent!!! Saste me mile toh le lo ..25k ke andar
Reviewed in India on 3 January 2019
Style name: i3 7th Gen + 4GB RAM + 1TB HDDPattern name: LaptopVerified Purchase
Bought it for rs 24000 only during amazon sale
Good laptop for office workers and students [ not gamers ]
A very good product but the camera and keyboard quality could have been better
Has large trackpad with fingerprint lock
Pretty smooth with Windows 10 preloaded that too latest update ( one should update to the newer win10 build edition before using it)
liked the screen quality too but look for no. of ports required before buying.
Read more
26 people found this helpful
Helpful
Comment Report abuse
See all reviews from India
Unlimited FREE fast delivery, video streaming & more
Prime members enjoy unlimited free, fast delivery on eligible items, video streaming, ad-free music, exclusive access to deals & more.
> Get started
Back to top
Get to Know Us
Connect with Us
Make Money with Us
Let Us Help You
EnglishChoose a language for shopping.
© 1996-2020, Amazon.com, Inc. or its affiliates