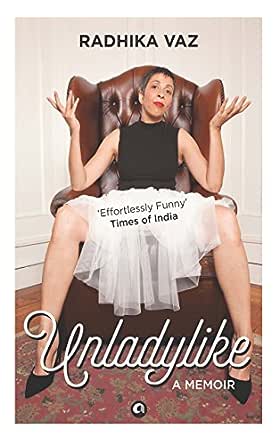 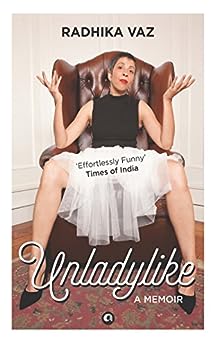 "Probably the funniest person you will ever meet" - Harper’s Bazaar

"Frank, fun and unapologetically feminist, Unladylike will have you chuckling and nodding along in equal measures" - Vogue

"Unladylike, is like reading Judy Blume, Candace Bushnell and Tina Fey all rolled into one" - Newslaundry

"Vaz is a rebel in disguise" - TimeOut

"[U]nlike many “celebrity” authors, Vaz writes lucidly and always has a point to make. There are enough giggles waiting around the corner. I highly recommend you buy your teenage daughter this book for all the early lessons in feminism... Believe me, you’ll thank Radhika Vaz for telling it like it is" - Mint

"The Vaz we get to meet in Unladylike is a treat. Even in our differences, [she] allows her readers to remember their own childhood, teenage years and youth. How often do we let society dictate out thoughts and how often do we commit to things we did not want to just because the rest of the world expected us to do so? These are questions that Vaz allows us to ask ourselves, by merely telling us about the eventful and memoir-worthy life she has lived" - International Business Times

"We are hooked to this one, especially since few like Ms. Vaz can make gender issues fun" - Mid-Day

--This text refers to the paperback edition.

Radhika Vaz is a comedian who has trained with members of the prestigious Groundlings School in Los Angeles, as well as at the Upright Citizens Brigade and The Magnet Theatre in New York city. Her first one-woman showUnladylike: The Pitfalls of Propriety’ has played to sold-out audiences in New York, Los Angeles, Mumbai, New Delhi, Gurgaon and Bangalore and she has been performing her second showOlder. Angrier. Hairier’ since July 2013. She is a freelance writer and has written for Chicken Soup for The Indian Couples’ Soul. She has a fortnightly column,Read it and weep’, which appears in the Times of India. --This text refers to the paperback edition.

3.5 out of 5 stars
3.5 out of 5
87 customer ratings
How does Amazon calculate star ratings?
Amazon calculates a product's star ratings based on a machine learned model instead of a raw data average. The model takes into account factors including the age of a rating, whether the ratings are from verified purchasers and factors that establish reviewer trustworthiness.

Anuradha Gupta
3.0 out of 5 stars Radhika’s life definitely offers good laughs for us
Reviewed in India on 19 February 2019
Verified Purchase
I am a 90s kid. I entered my teenage in the early 2000s and probably belong to the last/second last generation of kids who know what “Vish-Amrit” means, even in their teens. I didn’t have access to a personal mobile or an internet connection until I was in college. That was 2009. I grew up almost with the same facilities as the kids a decade older than me, maybe just a little more. I was never the wild kinda kid, and I didn’t turn out to be a wild kinda girl. In fact, when I think of it now, my type of “traditional” people don’t belong in the 90s or 80s for that matter, but farther in the 50s or 60s. Why do I say so? Because there is always someone amongst us who make us feel that way. One such person is Radhika Vaz. How do I know her? The great Amazon India introduced us under the category of “Books that might interest you” and “Books under sale” So needless to say, she ended up in my home, and a couple of months later in my hands.
Unladylike by Radhika Vaz is a memoir of the author, giving us a brief peek into her life. From an unpampered single child to be one of the most hilarious comediennes, Radhika has a lot to offer.

A product of mixed breeding, Radhika Vaz is the only child of her parents. Being the daughter of a man who worked for the air force, she spent a substantial amount of time being transferred to different cities until her parents realized the loss of her schooling and enrolled her at a boarding school. Being between girls, big/small/large/tiny/ugly/beautiful and all the other adjectives, 24/7, it wasn’t long enough before Vaz started feeling inferiority complex about as trivial a thing as not getting her periods when most of her peers did. Such pressures coupled with being away from home for the better part of the year didn’t let her have a buddy relationship with her parents. She, however, does share buddy relationships with her buddies. With a low paying job and weekend partying, waltzing through her life was never Vaz’s idea, but what she didn’t know was that she would be barely able to stand in the ballroom of love unless she took matters into her own hands. So when her longtime boyfriend doesn’t seem interested in taking their relationship further, she takes the onus on herself to coax him into an official commitment for which she changes countries and citizenship! Talk about “Saat samundar paar mai tere peeche peeche aa gai…”
Vaz gives insights into her life in installments, little snippets from her childhood, adolescence, and youth going on to middle age, I believe there is a lot more unsaid than what has been said.

The first thought that came into my mind when I turned over the last page - wannabe. The story wasn’t something new or life-changing, but a regular one that could have been the plot of one of the numerous Bollywood films that are made on a girl chasing her dreams. The writing was good and the language was the same which one could use to talk to others like Vaz does in her shows. By the way, have you ever seen Vaz’s stand up? However, I found it quite weird when she quoted/talked about the past in the same language as the present which definitely couldn’t have happened considering the evolution of Indian English (slangs included) only took place in recent times.
So, what does unladylike mean? As per the author, she is unladylike because she falls more towards the masculine side than the feminine. Not only she attributes her physical features to be closer to men, at times even wondering if she was a man in a woman’s body, but also her behavior. And here comes the catch, her thoughts though, are as feminine as a Hugh Hefner’s Playboy bunny. I say this specifically for her early years of life, the teens and the 20s. From obsessing over the delayed onset of her monthly cycles to lunging at the first opportunity of romantic proposal, from worrying about her petite breasts to wanting to marry just because others should think she is happily committed, Vaz’s idea of unladylike is only limited to her exterior. Deep down, I believe, she was just as much a lady as we all were at that age.
Radhika’s life definitely offers good laughs for us, but what it also offers is advice. Advice to women, young and old, to smash that patriarchy, unabashedly. When you have dreams, go out there and chase them, for prince charming on a white horse is the talk of yesterday.

Rajnish Dhall
5.0 out of 5 stars Where no woman has gone before!
Reviewed in India on 6 February 2016
Verified Purchase
Absolutely LOVED this book! A refreshingly different coming of age story where the author boldly articulates so many things that girls and women think but dare not say - even to themselves. The writing is deliciously funny and her turn of phrase is just genius!
Can't wait for more from her.

Rinisha
3.0 out of 5 stars PICK IT UP
Reviewed in India on 24 October 2018
Verified Purchase
Funny but also touches on topics that you can relate to. Doesn't get into her comedy career, but I hope she comes up with a new book for that.
Read more
Helpful
Comment Report abuse

Hema
4.0 out of 5 stars Loved the book
Reviewed in India on 26 March 2016
Verified Purchase
Loved the book. Hilarious in a self depreciating way. In the beginning it was a little slow however it picked up pace and I started looking forward to what's next. Worth a read
Read more
Helpful
Comment Report abuse

Amazon Customer
4.0 out of 5 stars Lovely!
Reviewed in India on 31 January 2018
Verified Purchase
Beautifully written. Very honest,witty and straight from her heart. Loved the book thoroughly. Would recommend to all serious and light readers. Thanks Vaz for this masterpiece.
Read more
Helpful
Comment Report abuse

Chintal
4.0 out of 5 stars Reached in Okay Condition
Reviewed in India on 18 September 2018
Verified Purchase
The book did not reach me in a good condition. The read is decent.
Read more
Helpful
Comment Report abuse

Shivkumar S
4.0 out of 5 stars Fast, fun read
Reviewed in India on 10 April 2016
Verified Purchase
A very fast and a very fun read. The breezy and matter-of-fact sort of humor, will ensure you are smiling your way through. Definitely recommend.
Read more
Helpful
Comment Report abuse

Bhumika S
5.0 out of 5 stars My morning train ride smiles
Reviewed in the United States on 25 June 2018
Verified Purchase
I've watched some of her stand-up specials on YouTube and when I came across the book I immediately picked it up. Funny and witty. Reminded me to look back on some serious decisions I've made as an adult and laugh about it.
Read more
Helpful
Sending feedback...
Thank you for your feedback.
Sorry, we failed to record your vote. Please try again
Report abuse

George C.
5.0 out of 5 stars A Recommended Read
Reviewed in the United States on 4 March 2017
Verified Purchase
Very enjoyable book. I liked the recounting of her childhood experiences in India. Funny and Informative.
Read more
Helpful
Sending feedback...
Thank you for your feedback.
Sorry, we failed to record your vote. Please try again
Report abuse

christopher alan koepke
5.0 out of 5 stars Radhika Vaz is the Indian Tina Fey
Reviewed in the United States on 24 February 2018
Verified Purchase
Hilarious, honest, and an interesting cultural lesson on what it’s like to grow up in India and come to America. I highly recommend!
Read more
Helpful
Sending feedback...
Thank you for your feedback.
Sorry, we failed to record your vote. Please try again
Report abuse