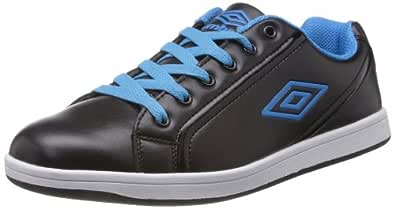 3.7 out of 5 stars 6 ratings
Pay on Delivery eligible

Currently unavailable.
We don't know when or if this item will be back in stock.
Share
Have one to sell? Sell on Amazon

Umbro is the original Manchester based football brand that invented sportswear and sports tailoring. Umbro’s first major football kit was made for Manchester City in 1934, a kit they won the FA Cup in. Today, the company combines its heritage in sports tailoring with modern football culture to create groundbreaking and iconic football apparel, footwear and equipment that blend performance and style.

The boy done well. Harold Humphreys was barely out of his teens when he started a sportswear company called Umbro from a tiny wash house on Green Lane in Wilmslow in 1924. The first deliveries were made with a handcart but within ten years, he was dressing Manchester City and Portsmouth for the 1934 FA Cup final at Wembley. If City took home the trophy, it was the smartness of the kits which caught everybody’s eye. By 1966, 85 per cent of all British clubs would be wearing Umbro. By then, the football brand.

The boys from Brazil in 1958. Tottenham Hotspur’s Double-winning team of 1960/61. England’s conquering heroes and 14 of their competitors at the 1966 World Cup. Liverpool’s enduring European dynasty in the seventies and eighties. Manchester United’s treble-winners of 1999. The finest sides. The most memorable games. All with one thing in common. They wore Umbro.

Even a brief list of memorable Umbro moments is a trip through the annals. Pele and Bobby Moore swapping shirts in sweltering Guadalajara in 1970. Alan Shearer wheeling away with his right hand in the air after all those England goals. Michael Owen slaloming through the Argentine defense in St. Etienne. Wayne Rooney’s first Premier League goal. Umbro on their backs or on their feet. Sometimes both.

It wasn’t just kits either. At the 1966 World Cup, Umbro crafted 5000 different garments to ensure players had the right gear to wear for work, rest and play during the three-week long tournament. Over time, the ever-increasing Umbro range of sportswear – from trackie bottoms to training tops, rain jackets to sweat shirts – became fashion staples in the schoolyard and on the street. Rock stars took the stage wearing drill tops with the giant Umbro double diamond on the chest. A much cooler kind of bling.

While also serving rugby, cricket and basketball with distinction through the years, Umbro revolutionized how football kits and sportswear developed. Collaborating with the most celebrated managers (from Sir Alf Ramsey in one era to Fabio Capello in another), and iconic footballers (Franny Lee to John Terry), everything has always been20about making the shirt, the shorts and the socks as match fit as the players who wear them.

Decades before replica shirts became fashion accessories, it was Umbro who introduced affordable kid-sized versions of club kits, allowing children to dress just like their heroes for the first time. They knew what the fans wanted because, even as the local outfit became truly global, Umbro retained the character and feel of the Humphreys’ family business.

Through various changes of ownership in recent decades, the distinctive double diamond logo has remained a constant. Wherever it is found, on trainers or boots, drill tops or team apparel, it guarantees quality and authenticity. Every item bearing the Umbro double diamond has been designed by people who genuinely know and love this game. That the very first English international shirt in 1874 contained a similarly shaped inlay is merely an accident of fate, an uncanny foreshadow.

The visionary Harold Humphreys wanted to bring a tailoring touch to sportswear to stylishly serve the practical needs of the modern, competitive athlete. From Speciali boots, the lightweight revolutionary that remains the professionals’ favorite in dressing-rooms across the world, to the ground-breaking new England kit, from the playground to the training ground, Umbro remains true to that ethos. The boys done well.

3.7 out of 5 stars
3.7 out of 5
6 customer ratings
How does Amazon calculate star ratings?
Amazon calculates a product's star ratings based on a machine learned model instead of a raw data average. The model takes into account factors including the age of a rating, whether the ratings are from verified purchasers and factors that establish reviewer trustworthiness.

bigdaddy
2.0 out of 5 stars Two Stars
Reviewed in India on 17 September 2015
Size: 11 UKVerified Purchase
The sole came off though i used it rarely and not for any sport activity.
Read more
Helpful
Comment Report abuse

Packaging from Amazon.in was excellent!!

Ameya Bongale
4.0 out of 5 stars Funky N Stylish Sneakers
Reviewed in India on 5 June 2014
Size: 8 UK
Found these umbro sneakers for a great deal on Amazon. The material and the fit of the shoe is top-notch, befitting the brand.Have worn the shoes in heavy rain, but the shoes are able to maintain the shine and look.
Delivery took a while however, not really a big issue. All in all a great buy for people looking out to buy a great pair of sneakers for office or personal use.

P.S: For those who think the blue laces are a bit much, you get a pair of spare black laces too.
Read more
Helpful
Comment Report abuse