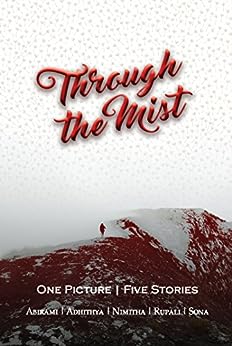 Through the Mist: One Picture | Five Stories Kindle Edition

4.5 out of 5 stars
4.5 out of 5
4 global ratings
How are ratings calculated?
To calculate the overall star rating and percentage breakdown by star, we don’t use a simple average. Instead, our system considers things like how recent a review is and if the reviewer bought the item on Amazon. It also analyses reviews to verify trustworthiness.

Preeti's Panorama
4.0 out of 5 stars I can surely say that ‘Through the Mist’ is a book to grab.
Reviewed in India on 29 October 2018
Through the Mist was introduced to me by Sona who is also one of the authors of the book. I met her through an Ebook Carnival where we both were participating. As we communicated she told me about this book which was a collaborative venture. When I came to know about the story behind the book, I couldn’t stop myself from reading it.

THE STORY BEHIND:
This book came into being when 5 authors came together to weave 5 stories with one photograph as a focal point.

'Okay, so it is a multi-author book. What is so different about it? Have read many like these.' These were my first thoughts. But, as it happens most of the time with me… my presumptions were wrong.

The authors of ‘Through the Mist’ raised the bar of story-writing a notch higher. The 5 authors started their stories focusing on one common picture; then handed over their unfinished stories to another writer. In this way, all the writers became a part of each story. All the 5 creations were born out of the joint creativity of 5 different authors!!!

Isn’t this amazing!!? Just think about it. These 5 authors have different writing styles. There is a difference in their age, in their experiences, in the way they perceive the stories and characters within. They have no clue what other is writing, so planning ahead of the story is not an option. Each author has to understand the story passed over to them like a baton, and then take it further ahead. It was indeed a daunting task.

PROS:
Apt Title:
The title ‘Through the Mist’ is so well suited to the picture which was the centre of their creative pieces and became the book cover. Somehow, after knowing more about this whole project, I also felt that the title suits the journey which these authors embarked upon. They successfully pulled out these beautiful stories from a haze of ideas, thoughts, emotions, perceptions of 5 different people.

The Stories:
Each tale is completely different from another. Where one is a simple fiction, another lies on the borders of fantasy. One portrays the longing for someone the other portrays the struggle to live.

Middle-Class Story is a tale about a typical Middle-class family of India. The family which is somewhere between the traditional living and modern thinking. With humorous incidents, the tale is spun around a girl called Pari and the boy who falls in love with her. The story grows well and I liked its pace. I wanted to know more about the lives of the young couples and wished the story was not so short :)

A Strange Life felt a little strange to me initially. Although a little difficult to comprehend the alternate lives of the protagonist at first, I could slowly and steadily understand the psychic side of it. I immensely liked the eerie atmosphere.

Languish in Love was an emotional roller coaster ride for me. The intense emotions of childhood love and its separation portrayed in this story were absolutely amazing. The longing pain displayed in the story by the protagonist touched my heart. The involvement of the picture in this particular tale was very impressive.

The Lone Man is a story about a person who is drowning in the sorrow of his deceased wife. The sorrow turns into fear when he realises that something is wrong around him. The fear changes into horror which increases ten-fold when the widower comes across an old dusty book having weird-looking images. The creepiness and the element of horror were brought out well in the story.

Turn of the Tides came out as a story with a touch of philosophy flowing underneath. It is about a seafarer striving against the ordeals of the sea. The most remarkable thing in this tale was the personification of the sea. It was amazing to find all the writers in sync with each other in this story.

Overall, these wordsmiths have weaved quite an interesting bunch of tales. Through the Mist may not be flawless but one cannot deny the level of challenge these début authors have taken to build the unique stories in it.
Read more
Helpful
Report abuse

Bloggeray
4.0 out of 5 stars A single picture gets interpreted in five wonderful ways.
Reviewed in India on 5 December 2017
Review: Pictures have been a way of chronicling the growth of mankind. Pictures have, throughout history, made impressions that have far exceeded their own existences as mere portraits or photographs. The Mona Lisa, anyone?

Through The Mist (TTM) is a book that draws on the power of a single photograph. The book’s cover (above) shows an image that has been used as inspiration for the five stories, by as many writers, featured in the book. The interesting thing is that all five of them collaborated on each of the stories. The authors are – Nimitha, Abirami, Adhithya, Rupali and Sona. The hyperlinks here are the links to their blogs.

It can be intriguing as to the ways in which interpretations can differ from person to person. Thus, while the opening story has a middle-class trip to the hillside, with a romantic plot or two thrown in, the third story is a reminiscence of the past, of a life lived and spent longing for the beloved. It is not a coincidence that I was reminded of these two stories while mentioning the differences in interpretation. The two are also, without doubt, the top two stories here in terms of impact. With five people working on every single story, achieving a cohesion of vision as well as making sure that each character is unique can be a big ask. But in the stories mentioned above, the flow, the voices of the various characters, the multiple-authors-and-confusing-idiosyncrasies that having multiple authors on a single story can bring, all achieve delicate balances.

The other three stories also have wildly differing takes on the picture. The second story has fantasy elements, with a mindbending twist thrown in; the fourth story talks of the pain of having lost a loved one. The fifth one takes yet another turn and shows us a person who is at the older end of the spectrum of life and fighting to stay in the game that belongs to the younger lot.

A quirky thing is that while the main protagonist of each of the first two stories is a woman, the next three all have men, of different ages, as their leads, despite all five authors being women themselves. In fact, in the whole team behind the book, only the publisher (and photographer) is a male, Mr. Jithin. While there’s no rule stopping them from doing this, it did feel intriguing to me. Partly because of the fact that all five are making their debuts. But, in taking up stories that peer into the mindset of the opposite gender, they show remarkable maturity and understanding. Kudos to the whole team, including the editor Aadhira, for the exemplary work.

Also, the ages of the protagonists make an interesting curve themselves. They start with a person in her early-to-mid 20s and then go down before, once again, picking the upward curve.

The stories explore themes of love, longing, loss and determination, among others. They pick up random events as variations on the photograph and make them something far more impactful, laying before us the joys and pains that a single image, one single shot, can cause to the viewer, because of what s/he has gone through in her lifetime. Nowhere is it clearer than in the final story, where an aged fisherman is fighting against Father Time and the sea, with the hill of the image providing the literal knockabout in his journey.

To conclude, although I do think that the stories could have benefitted from a couple of rewrites each, for a debut work, they hold great variety and promise for the authors.

Verdict: Through The Mist is an intriguing collection of stories that holds immense promise for the storytelling abilities of its authors.

Harinder puri
5.0 out of 5 stars A Delightful mix!
Reviewed in India on 29 October 2018
An eclectic mix of stories. The writers' style flow seamlessly blending together,bringing out the stories to their natural conclusion. An interesting experiment with the writing style. Must read to enjoy and marvel the stories as these five authors weave magic with their words.
Read more
Helpful
Report abuse

Arun K.
5.0 out of 5 stars Amazing Concept, Awesome Stories
Reviewed in India on 27 August 2018
The concept of taking a picture and weaving stories around it was amazing. There was an apprehension before starting the book. But all the writers did wonder with their bit. I am eagerly waiting for the next book by these people.
Read more
Helpful
Report abuse
See all reviews
click to open popover
Back to top
Get to Know Us
Connect with Us
Make Money with Us
Let Us Help You
EnglishChoose a language for shopping.
© 1996-2021, Amazon.com, Inc. or its affiliates