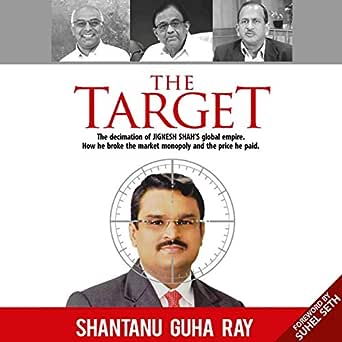 Sold and delivered by Audible, an Amazon company

Mktreader
5.0 out of 5 stars Read it TODAY
10 January 2017
Format: HardcoverVerified Purchase
Friend from Delhi gave it for a day and completed just now and ordered my copy as well. It will make you understand that our knowledge and belief completely depends on what media and social media want us to believe! I always had a question what could have been motive for Jignesh Shah to do something like that and without even money coming to him! This book answered that as well as explain the real reasons beyond what I was made to believe. I won't be surprise if this change the perspective of many people like me and may help in getting truth out. Overall interesting reading for india's corporate world / underworld and price one pay for own success or challenging competitors!
Read more
13 people found this helpful
Helpful
Comment Report abuse

Rohan Khatri
4.0 out of 5 stars Raising the curtains off numerous conspiracies Shantanu Guha Ray binds ...
11 January 2017
Format: HardcoverVerified Purchase
Raising the curtains off numerous conspiracies Shantanu Guha Ray binds you till very end with The Target To put Jignesh Shah out of business numerous steps were choreographed, each one more ridiculous than other. Forwards Market Commission reduced the delivery dates on one-day forward contracts beyond eleven days to just ten days. This was the first setback for NSEL as this left them with multiple payment lapses. Whether it was the forced merger of NSEL with FTIL or the attention continuously diverted from the real defaulters, Shah still continues to long for justice for himself and the sixty three thousand families which have suffered through the hands of fate and malicious conspiracy.
Read more
5 people found this helpful
Helpful
Comment Report abuse

Kanisha contractor
5.0 out of 5 stars Meticulous Investigation revealing Policy Corruption and Power Misuse during UPA regime
19 May 2017
Format: HardcoverVerified Purchase
Very insightful. As a citizen of this country, feel sad to know the reality and how a true Make in India growth story was destroyed by vested interest acting against the national interest. What India has lost is reparable.
As a budding entrepreneur, I feel India needs many more Jignesh Shah.
What a vision and his immense contribution in democratising the financial markets and providing last mile connectivity, thereby empowering rural India.
And the price HE paid.
Must read...Khudos to Shantanu !!