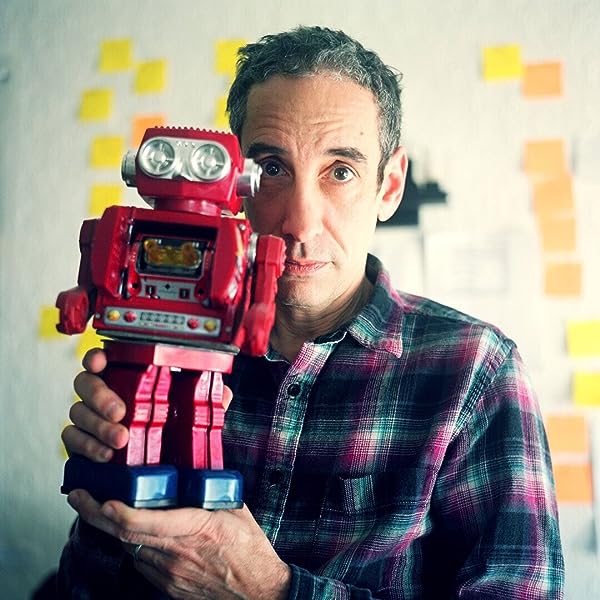 Survival of the Richest: Escape Fantasies of the Tech Billionaires Hardcover – Import, 6 September 2022

by Douglas Rushkoff (Author)
4.2 out of 5 stars 196 ratings
See all formats and editions
Sorry, there was a problem loading this page. Try again.

Keep the item in its original condition and packaging along with MRP tag and accessories for a successful pick-up.
Read full returns policy
Amazon Delivered
Amazon directly manages delivery for this product. Order delivery tracking to your doorstep is available.
Great on Kindle
Great Experience. Great Value.

Putting our best book forward
Each Great on Kindle book offers a great reading experience, at a better value than print to keep your wallet happy.

Explore your book, then jump right back to where you left off with Page Flip.

View high quality images that let you zoom in to take a closer look.

Enjoy features only possible in digital – start reading right away, carry your library with you, adjust the font, create shareable notes and highlights, and more.

Discover additional details about the events, people, and places in your book, with Wikipedia integration.

View the Kindle edition of this book
Get the free Kindle app:

Enjoy a great reading experience when you buy the Kindle edition of this book. Learn more about Great on Kindle, available in select categories.
View Kindle Edition

The tech elite have a plan to survive the apocalypse: they want to leave us all behind.

Five mysterious billionaires summoned theorist Douglas Rushkoff to a desert resort for a private talk. The topic? How to survive the “Event”: the societal catastrophe they know is coming. Rushkoff came to understand that these men were under the influence of The Mindset, a Silicon Valley–style certainty that they and their cohort can break the laws of physics, economics, and morality to escape a disaster of their own making—as long as they have enough money and the right technology.

In Survival of the Richest, Rushkoff traces the origins of The Mindset in science and technology through its current expression in missions to Mars, island bunkers, AI futurism, and the metaverse. In a dozen urgent, electrifying chapters, he confronts tech utopianism, the datafication of all human interaction, and the exploitation of that data by corporations. Through fascinating characters—master programmers who want to remake the world from scratch as if redesigning a video game and bankers who return from Burning Man convinced that incentivized capitalism is the solution to environmental disasters—Rushkoff explains why those with the most power to change our current trajectory have no interest in doing so. And he shows how recent forms of anti-mainstream rebellion—QAnon, for example, or meme stocks—reinforce the same destructive order.

This mind-blowing work of social analysis shows us how to transcend the landscape The Mindset created—a world alive with algorithms and intelligences actively rewarding our most selfish tendencies—and rediscover community, mutual aid, and human interdependency. In a thundering conclusion, Survival of the Richest argues that the only way to survive the coming catastrophe is to ensure it doesn’t happen in the first place.

Dark and revealing… Rushkoff provides a powerful critique of the attitudes and technologies that enable these deceptions.—Washington Post

Survival of the Richest reveals fascinating tidbits about the elite tech crowd’s postapocalyptic survival strategies and the niche solutions being marketed to them. —Carolyn Wong Simpkins, Science

A devastating portrait of the cultures and logics underlying big tech. Rushkoff is going to make you mad enough to fight back. A vital, lucid, and enraging read.—Naomi Klein, author of This Changes Everything: Capitalism vs. the Climate

Survival of the Richest is more than a primer on a soulless worldview pervading all aspects of life. Defying fantasies of escape—from each other, from earthliness, from Earth—Rushkoff offers something at once more realistic and more imaginative: mutual regard, responsibility, and flourishing. In so doing, he mounts an impassioned defense of everything and everyone marked expendable in the fanatical pursuit of a blank slate. —Jenny Odell

Douglas Rushkoff has always been a singular observer and thinker. Embedded near the epicenters of the digital revolution, he has never flinched from honestly delivering fresh, radical, humane critiques of the emerging world. There are plenty of books decrying the horrors of twenty-first-century monopoly capitalism, but none quite like Survival of the Richest. —Kurt Anderson, author of Evil Geniuses

Beyond eye-opening, this book is eye-popping. A master storyteller, Rushkoff brings to life perhaps the greatest challenge of our time. A must-read.—Frances Moore Lappé, author or coauthor of twenty books, from Diet for a Small Planet to Daring Democracy

Rushkoff gives us a sober, scathing oddsmaking on the recursive wager of the ultra-rich.—Cory Doctorow

[Rushkoff’s] report is both fierce and amazed in the face of capitalism’s delusions; I for one am sharpening my pitchfork.—Jonathan Lethem

Douglas Rushkoff’s keen eye as a seasoned media analyst, combined with his flair and wit as a writer and a performer, shine in this book.—Marina Gorbis, executive director of Institute for the Future

A hilarious and lacerating look at the elite sociopathy wrecking the world, and a call to arms for how the rest of us can fight it.—Molly Crabapple, author of Drawing Blood and coauthor (with Marwan Hisham) of Brothers of the Gun

With razor-sharp insight, Rushkoff unwraps the dazzling facade of the technological dream, revealing the alarming Mindset that underlies promises of planetary salvation.—Jeremy Lent, author of The Patterning Instinct and The Web of Meaning

A scary, true and unsettling look at what happens when money causes people to lose their humanity.—Seth Godin

Numbing and mind-blowing in equal measure, Survival of the Richest reveals how tech billionaires are planning to survive a global apocalypse. —BookPage

[A] thorough and authoritative condemnation of tech worship.—Kirkus Reviews

A shocking account of how the very wealthy prep for doomsday [and]…an eye-popping look at some outlandish visions for the future.—Publishers Weekly

Douglas Rushkoff is professor of media theory and digital economics at Queens/CUNY. Named one of the world’s ten most influential intellectuals by MIT, he hosts the Team Human podcast and has written many award-winning books. He lives in Hastings-on-Hudson, New York.

Named one of the “world’s ten most influential intellectuals” by MIT, Douglas Rushkoff is an author and documentarian who studies human autonomy in a digital age. His twenty books include the upcoming Survival of the Richest: Escape Fantasies of the Tech Billionaires, Team Human, based on his podcast, as well as the bestsellers Present Shock, Throwing Rocks and the Google Bus, Program or Be Programmed, Life Inc, and Media Virus. He also made the PBS Frontline documentaries Generation Like, The Persuaders, and Merchants of Cool. His book Coercion won the Marshall McLuhan Award, and the Neil Postman Award for Career Achievement in Public Intellectual Activity.

He coined such concepts as “viral media,” “screenagers,” and “social currency,” and has been a leading voice for applying digital media toward social and economic justice. He a research fellow of the Institute for the Future, and Professor of Media Theory and Digital Economics at CUNY/Queens. He is a columnist for Medium, and his novels and comics, Ecstasy Club, A.D.D, and Aleister & Adolf, are all being developed for the screen.

4.2 out of 5 stars
4.2 out of 5
196 global ratings
How are ratings calculated?
To calculate the overall star rating and percentage breakdown by star, we don’t use a simple average. Instead, our system considers things like how recent a review is and if the reviewer bought the item on Amazon. It also analyses reviews to verify trustworthiness.

There are 0 reviews and 3 ratings from India

R Bancroft
2.0 out of 5 stars Pretty insubstantial
Reviewed in the United Kingdom 🇬🇧 on 8 January 2023
Verified Purchase
I saw a video talk he gave and he seemed sharp, interesting and funny, but like a number of other readers here, I found this book a BIG disappointment. TBH I didn't read it all. I skipped forward hoping that it would get more interesting. Maybe I missed his point, but his interpretation of the current political environment I thought was ill-informed and naive. His account of the 'mind-set' dominating the thinking of the rich elite is pretty insubstantial and adds nothing that's not already understood by any thinking person. But, hey, don't worry, he says, we just need to retain our humanity and create new and better ways of doing things and that will counteract their pathetic enterprises .......oh jolly good!
He writes well though it all feels a bit pretentious and frankly quite bland.
Read more
One person found this helpful
Report abuse

susan worts
5.0 out of 5 stars Survival of the Richest by Douglas Rushkoff
Reviewed in Canada 🇨🇦 on 26 October 2022
Verified Purchase
Beautifully written and extremely informative. I highly recommend it to others. Will purchase more by this author!
Read more
Report abuse

Krunos
5.0 out of 5 stars It's a good read
Reviewed in Australia 🇦🇺 on 29 December 2022
Verified Purchase
There is so much in this book to get things started bogle your own mind with it and come up with your own conclusions.
Read more
Report abuse

bossaboy
1.0 out of 5 stars I really wanted to find this worthwhile
Reviewed in the United States 🇺🇸 on 24 September 2022
Verified Purchase
After reading the author's comments in an article at the Guardian my interest was piqued and I decided to purchase and read his book assuming the author had something more to say on the topic. It turns out - not so much. Along with what I found to be a rather tepid critique of the billionaire class and their world view, the author manages to credulously deliver the "official story" position on many other topics. I learned among other things that the official public health narratives of the past several years are all "true," along with the "official" account of the events of nine-eleven 2001. I must admit that this book was a sobering reminder of just what it takes to be considered a "public intellectual" in the West today - in this case simply bark the "official story" while offering the most bland critique imaginable of global elites - and then posture as if you're some sort of rebel while doing so. If you are already well informed regarding the state of the world - outside the "official" boundaries set by MSM news sources - you will find this book a rather huge disappointment I dare say.
Read more
14 people found this helpful
Report abuse
See all reviews