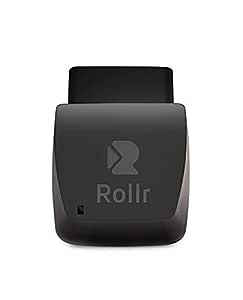 Item is in your Cart

There was a problem adding this item to Cart. Please try again later.
We do not have any recommendations at this time
Continue shopping

Rollr mini is a revolutionary telematics device that will change your experience of owning a car for ever. Simply plug Rollr mini into your car and get instant access to valuable insights about your vehicle right from your smartphone.
At the heart of Rollr MINI is a powerful micro-controller that collects crucial vehicle information round the clock through inbuilt sensors. This continuous stream of data is then processed by our advanced analytics engine and delivered to you as meaningful insights letting you do unimaginable stuff.
Ensuring family safety, tracking your driver behaviour or keeping a tab on your car’s health, no matter what your requirement Rollr MINI will make it happen.
At Rollr we are obsessed about our customers and take them very seriously. Years of experience of working with leading passenger and commercial automobile companies of the world , and 25 years of legacy of being one of the most trusted and reputed automobile company in the country, has given us an unparalleled understanding of our customers and their vehicles.
We have designed Rollr mini to meet stringent quality requirements of automobile manufactures and tested it on more that 100 car models. The device is AIS-004 compliant, and all embedded components are industrial/auto grade providing superior performance and enhanced product life even at extreme operating conditions ( - 40* C to + 80* C ).
Rollr MINI comes with an accompanying mobile app that offers a host of awesome features including Location Sharing, Real time vehicle tracking, Geo-fencing, Configurable alarms & alerts, Trip analytics and Driving behaviour tracking and much more. Downloaded over 35000 times from the Android and iOs App Store and Rollr app is updated every month with new features and app updates.
Rollr MINI has been designed to work with the OBD II port of your car, a standard fitting, present in all cars manufactured after 2010. No wire cuts so no warranty issues.

At Motherson Invenzen XLab we believe that telematics has the potential to revolutionise the world around us by bringing together devices, artificial intelligence and services. Our mission is to empower our customers to tap the immense potential of telematics by making technology accessible to them in affordable and innovative ways.
Rollr MINI is a first of its kind telematics solution for private vehicle owners in India. Powered by best of the breed technology, Rollr makes it affordable and convenient for vehicle owners like you to secure their vehicles and families and gain peace of mind. We are excited about the opportunities that exist today in the consumer segment and our vision is to transform the lives of our customers by bringing innovative location based services to them.

Stay in control by getting instant access to your vehicle’s location and history.

If you’ve ever worried about your kid’s reaching home safely or about your son driving too rash, then Rollr Mini is the product for you. Rollr’s industrial grade GPS captures vehicle location in Real time and allows you to place vehicle alerts, Geo-fences, arrival and departure alerts and much more. Just plug Rollr MINI into your car and get instant access to vehicle location on-demand.

Rollr keeps track of over-speeding, hard breaks and route deviations and much more. Our proprietary algorithms analyse data from accelerometer, GPS, engine RPM and other sensors to accurately predict exactly how your driver is driving the car. Idling statistics let you understand whether air conditioning is being used when the vehicle is parked.

Describe your product in 3 words.

How did you come up with the idea for this product?

We observed that while the automobile industry in the US and Europe was moving towards self driving cars and other related advancements, the Indian automobile sector was highly underserved. We took this challenge upon us to bring affordable solutions to Indian customers and that’s how the concept of Rollr MINI originated.

What makes your product special?

Years of experience of working with leading automobile manufacturers of the country has helped us gain un-matched understanding of our customers and their cars. With Rollr MINI we bring to our customers a device that’s robust, predictable and tested throughly on over 100 car models

What has been the best part of your startup experience?

Getting Started is Easy

Benefits for you - Less Worries About your Car & Family

Rollr Mini is completely designed and manufactured in India by the Samvardhana Motherson Group (SMG). SMG is a leading auto-components supplier to all the major OEMs of the world.

- Worried about your driver? Get to know how exactly your driver is driving your car and capture any rash/unexpected driving behaviors by setting custom alerts

- See the reasons behind engine malfunction – See diagnostics alert related to engine, battery and other car health parameters. The data that your service center person has, is now also available to you as well you

- Don’t be anxious about your car - Be connected with it. With Rollr Mini, you are always connected to your car, so you know where and how it is being driven. Security alerts and several configurable alerts makes it easy to manage your car remotely

- Always up-to-date - Rollr Mini is capable of auto-updating its software over network, so you are assured of new features and benefits coming your way. Let us know any particular features that you would like to have in the Rollr Mini

- Multi-user/Multi-car support - Rollr App allows you to share your car data with your trusted family members. You can also track more than one Rollr Mini from the same app

Q1. Is my car compatible?

Q2. How does the Rollr Mini work?

A2. Rollr Mini plugs into the OBD-II port of your car. The Mini has inbuilt modem (SIM card) that gets location and car data and delivers it to you (on the Rollr App) via our servers. We interpret the data on our servers to show it to you in the most meaningful and understandable way in the app.

Q3. What is OBD-II and what are the benefits of accessing the data generated by OBD-II?

A3. OBD-II refers to On Board Diagnostics - All the cars manufactured after 2008 have this diagnostics support and it enables detection of any problems that the vehicle might be having. It is used by service professionals in service centers to diagnose problems with engine such as misfiring, low fuel economy, heavy emissions amongst others. The same information is now also available to you via the Rollr Mini and it may help you to diagnose serious issues before they become hazardous.

Q4. How is my driving behavior (Rollrscore) calculated?

A4. Your Rollrscore calculation is based on complex algorithms based on analysis of thousands of kilometers of data heuristics that we have collected. To simplify, the following events detected by Rollr Mini governs your net driving score - Sudden acceleration, sudden breaking, over-speeding or Idling.

Q5. Do you ship internationally? Will it work in outside India?

A5. Unfortunately, we do not ship to international locations as yet and Rollr Mini will not work outside India.

Q6. Can I use Rollr Mini with more than one car?

A6. Yes, you can plug the Rollr Mini to another Car - however, please note that the historical data from your previous car will be merged with the new car. You may reset your previous car data, if you permanently wish to switch it to a new car.

Q7. Does Rollr Mini have a subscription fees?

A7. Rollr Mini comes with the first year Data cost included - there is no other subscription fees over this data charges. Renewal from the second year onwards comes at a nominal cost of Rs. 99 per month (renewed annually).