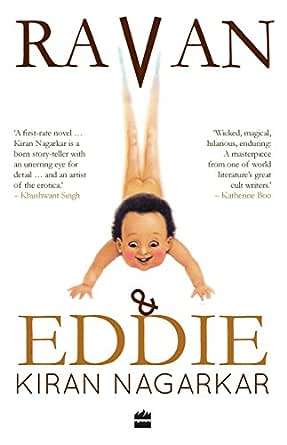 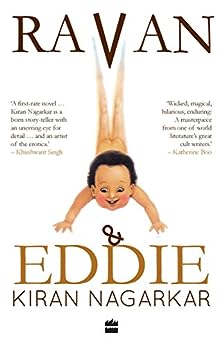 Kiran Nagarkar is the author of the critically acclaimed novels Cuckold (for which he won the Sahitya Akademi Award), God's Little Soldier and The Extras, a sequel to Ravan and Eddie. His first book, Saat Sakkam Trechalis, written in Marathi and translated into English as Seven Sixes are Forty-three, is considered a landmark in post-independence Indian literature. His novels have been translated into German, French, Italian, Spanish, Portuguese as well as Marathi. Nagarkar has also written several plays and screenplays, both in Marathi and English. Ravan and Eddie is slated to be published as an e-book by The New York Review of Books under their new imprint, NYR Orignals. --This text refers to the paperback edition.

4.1 out of 5 stars
4.1 out of 5
28 customer ratings
How does Amazon calculate star ratings?
Amazon calculates a product's star ratings based on a machine learned model instead of a raw data average. The model takes into account factors including the age of a rating, whether the ratings are from verified purchasers and factors that establish reviewer trustworthiness.

MJ
4.0 out of 5 stars An amusing take on post independence Bombay life
Reviewed in India on 11 December 2017
Verified Purchase
After many many days I finally came across a cover that was something to write home about. It shows a baby seemingly whooshing through the air with a look of utter happiness on his face. It is just such an intriguing picture that seems to have no real easily decipherable meaning, that is until you start reading and understand it completely. It certainly needed a little more finessing, but there is no doubt that it is an excellent cover. It made me think of Alien abductions for one thing. For some reason though, the cover doesn't show-up on the Kindle edition.

Ravan and Eddie was the first book by Kiran Nagarkar that I have read, after hearing rave reviews of ‘Cuckold’ by the other members of the book club. The title was no help in figuring out what the story would be about. Religious drama, split personality syndrome, Meera bai kind of devotion to a deity or alien abductions as mentioned above. Yes, those were the things I thought it might be about. It certainly has a bit of religious commentary, but its more about two little boys growing up in a Bombay chawl. No signs of split personalities or even a God complex.

So Ravan and Eddie are two boys born a few months apart in a post independence Bombay chawl and are divided by more than the floors of the chawl, their religious backgrounds and their cultural differences. A strange and tragic incident, when Ravan was an infant and Eddie was still to make an appearance, ensures that never the twain shall meet. At least as long as their mothers are alive. There lives run almost parallel as they grow up, look for ways to expend their energies, learn to handle the dramas at home, begin understanding their sexuality and do most of the normal things that boys do growing up.

This novel was a literary introduction into chawl life for me, since Bollywood movies are full of visual references to it. But reading about it and watching snippets of the hero emerging from the dilapidated tenements are two very different things. The religious divides and then those on the basis of caste seem to decide the social life of the residents of the chawl. The difficulty of conducting all of life’s affairs in the full glare of the society one lives in must need a formidable sense of confidence in oneself or perhaps brazenness. A hard life indeed.

The characters that Nagarkar has etched find instant connect with the reader. One begins to feel for Ravan and Eddie as if they were old friends. And, one must say, admire their resourcefulness. The lives of their respective mothers is hard and seems to have turned them both bitter and angry to almost the same degrees. And yet they are managing their lives in ways they know best. One would of course be free to judge and condemn their actions and the many mistakes they seem to be making in handling their sons, but that is always too easy to do. Trying to live the lives that these women are living seems harrowing. And yet, there are millions doing the same every single day. ‘There but for the grace of God’ seems a good phrase to contemplate on at such times.

The best part of the book were these essays that the author has put between the text to explain some of the idiosyncrasies of Indian culture and living. His take on Bollywood movies was an especially educating read. These little essays are nice little detours to take while reading the book. It's almost like having a conversation with the author himself. By the end of the book, one feels that he/she knows the author almost as well as the characters that he has introduced to us.

The jarring note for me was the sexual exploitation of Ravan by the school gunda. It was disturbing and seemed very out-of-place, not because it isn’t something that could not happen but because of the way it happens and the number of people it encompasses and the matter-of-fact way that Ravan seems to accept it. Even extremely innocent 11-year-olds know when something gross is being done to them, even those who lived 60 years ago.

Some may take exception to the obvious religious disdain the author shows towards the various Hindu Gods and the Catholic ways of life, but he is sufficiently even-handed in criticizing both sides to comes across more of an atheist than anything else. And one should certainly be able to take criticism when it is mostly true. Maybe console yourself with the fact that things are changing all the time and hope for better things ahead.

Overall, this was an interesting read. And now that I know it has a sequel, I would certainly like to know what happened to Ravan and Eddie. Did they live up to their potentials? Did they become friends? Did they find love? Did they relive the lives of their parents or did they do things differently? Whatever, the next book may bring, this one was certainly good enough as a standalone novel too.

AJ
5.0 out of 5 stars What an awesome read! Loved it!
Reviewed in India on 9 July 2016
Verified Purchase
Wonder why writers like Nagarkar remained hidden for so long! What a book.. what a darn good book. If you've lived in the chawl days of Mumbai then identifying with the characters becomes easier. If not, then that's another adventure by itself. A MUST pick!
Read more
3 people found this helpful
Helpful
Comment Report abuse

V Krishnan
3.0 out of 5 stars The real Mumbai
Reviewed in India on 21 October 2016
Verified Purchase
Though the novel started off interestingly,with the a very vivid description of Bombay's chawl life and the mix of Hindu and Christian culture , it got a little weary towards the middle. It is funny if you like that kind of humor. The reference to RSS and the conflict in life under difficult circumstances is well portrayed.All in all , worth a read because of Kiran Nagarkar's thoughts and style.
Read more
Helpful
Comment Report abuse

Rajesh K Sharma
4.0 out of 5 stars Funny, bawdy
Reviewed in India on 20 September 2016
Verified Purchase
This book marries funny with tragedy beautifully. One moment the reader is laughing at the antics of the characters and the next, is stunned by the tragedy unfolding. Kiran Nagarkar paints a vivid portrait of life in a Bombay chawl. Apart from the titular characters, this book features other memorable characters like Parvatibai, Violet and Father D'Souza too. Thoroughly recommended.
Read more
Helpful
Comment Report abuse

Sreejata Roy
5.0 out of 5 stars Marvellous
Reviewed in India on 31 May 2018
Verified Purchase
A marvellous take on contemporary Mumbai. Wise, crackling with humour , sarcasm, wit and irony yet sensitive about the rigours of different classes and character.
Read more
Helpful
Comment Report abuse

Amazon Customer
5.0 out of 5 stars Super!
Reviewed in India on 27 July 2017
Verified Purchase
Ravan and Eddie brought back to me memories of 80's Bombay. There was no book read in recent times which was even near to this books humour and wit. The characters are adorable. Story telling at it's best!
Read more
Helpful
Comment Report abuse

Vinod Dhall
4.0 out of 5 stars Four Stars
Reviewed in the United States on 20 May 2015
Verified Purchase
I have become a Nagarkar fan.
Read more
Helpful
Sending feedback...
Thank you for your feedback.
Sorry, we failed to record your vote. Please try again
Report abuse

Shantanu
5.0 out of 5 stars awesome read.
Reviewed in the United States on 29 May 2013
Verified Purchase
One of my favorites. I love how well the writer uses his words. This what real literature is made of
Read more
Helpful
Sending feedback...
Thank you for your feedback.
Sorry, we failed to record your vote. Please try again
Report abuse