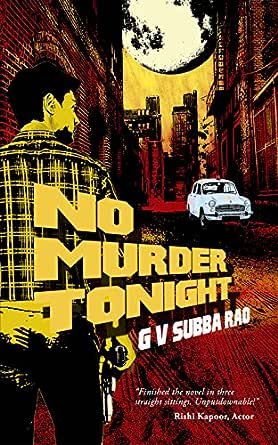 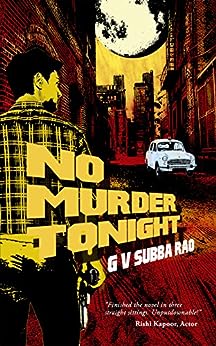 Finished the novel in three straight sittings which is quite rare for a reader like me. Simply because I found it unputdownable and was constantly curious to know how the story would unfold.
-Rishi Kappor

A very fine book. The characters are believable, intriguing and smart. The narrative was from the wheels of Lewis Hamilton and the finish had the flourish of a James Bond film.
-Suhasini Maniratnam

Friday, October 17, 9pm. All forces are converging in Chennai.
Santosh, a regular engineer turned political assassin.
Maria, an aspiring pilot turned spy.
Swapna, a medical student turned into the city’s highest-priced madam.
Sandeep and Amit, CBI officers turned commandos.
Shyam Agarwal, a respected industrialist turned conspirator.
In the eye of the storm is the all-powerful, Power Minister, Salem Palaniswamy whose lust for power and money corrupts the lives and dreams of the innocent.
With love, honour and revenge in the air, and a 1000 crores of unaccounted money at stake, the question is… will there be murder tonight?

A post graduate with an MPhil in English Literature, Subba Rao hails from a family that's deeply steeped in music and the arts. His father, Gollapudi Maruthi Rao, is a well-known Telugu author, award-winning playwright and screenplay writer, as well as a film actor of repute. His grandfather, Padma Bhushan Dr. Sripada Pinnakapani, was a doyen of Carnatic music. Rao is also Managing Trustee of the 'Gollapudi Srinivas Memorial Foundation' instituted in memory of his brother Gollapudi Srinivas. This foundation confers the annual 'Gollapudi Srinivas National Award' for the 'Best Debut Director' in India and has been doing so for the past seventeen years. It is no surprise that this businessman and avid traveller turned to writing, penning travelogues for newspapers and magazines. His articles have been published in the Deccan Chronicle, The Hans India and the Ashvarttha, a wellness magazine. Rao now turns an author with this debut novel, 'No Murder Tonight', an edge-of-the-seat thriller. He waits for your feedback at subbaraogv1962@gmail.com.

Rutuja Ramteke
4.0 out of 5 stars An amazing thriller
8 January 2020
Format: Kindle EditionVerified Purchase
No Murder Tonight🌻
Friday, October 17, 9pm. All forces are converging in Chennai.
Santosh, a regular engineer turned political assassin.
Maria, an aspiring pilot turned spy.
Swapna, a medical student turned into the city’s highest-priced madam.
Sandeep and Amit, CBI officers turned commandos.
Shyam Agarwal, a respected industrialist turned conspirator.
In the eye of the storm is the all-powerful, Power Minister, Salem Palaniswamy whose lust for power and money corrupts the lives and dreams of the innocent.
With love, honour and revenge in the air, and a 1000 crores of unaccounted money at stake, the question is… will there be murder tonight?
.
🌻Oh no, couldn't believe the climax, in total awe. Not giving much of spoilers but this was amazing. Right from the beginning, the characters were amusing, very cool. Whether is Maria, Swapna, Sandeep, who so ever they have their own taste and past. The way they were presented seem so original and natural. Would be happy to see this on Tv, things felf so so good and so on point. Though, the pace kept changing but the fact that it was slow made me read it quicker. I started it yesterday and completed it yesterday itself.
I am so happy that am getting such good books to read this year. The plot and characters are the heart of the book. A thriller lover must try. Definitely recommended.
.
Rating: 4🌟

rakesh
4.0 out of 5 stars a movie
9 July 2018
Format: Kindle EditionVerified Purchase
it's a well penned novel and I was mind blown by the fact that it's a debut which was not known through out the read. being a South Indian I could very much relate to it and it's def a light but thrilling movie script. the author kept the story very grounded and will be a very good book for those who wants to start reading novels. I believe he should write more and make more complex plots. but this is an awesome debut. well done
Read more
2 people found this helpful
Helpful
Comment Report abuse

Shan
3.0 out of 5 stars Good plot and narrative but far from reality
20 September 2018
Format: Kindle EditionVerified Purchase
The author, no doubt, has done a good job when it comes to setting up a plot. Narrative is smooth and the story is gripping. Characters are well developed with adequate information on each character and their linkages with themselves and the story. However, what actually didn't impress me was the reality-quotient of this. the author is quite imaginative and that is well reflected into the book but the imagination has to be married with reality which generally makes me super interested in books. Else, it's all flying in the air. An ok one time read.
Read more

sandeep kamath
5.0 out of 5 stars Thrilling
12 February 2018
Format: Kindle EditionVerified Purchase
The book is undoubtedly thrilling from the word go. The characters have been etched out well. The mystery of murder keeps you tuned till the last stage. But i feel some unnecessary has detailing has gone into the character etching. Overall a fantastic book and Mr. Subba Rao has done a superb job in keeping interest in the book till the last page. Loved it
Read more
Helpful
Comment Report abuse

VIVEK M
5.0 out of 5 stars Thriller, at it's best
9 June 2018
Format: Kindle EditionVerified Purchase
The plot elements are revealed carefully for a roaring thriller. Great thought process in arranging the chapters. Minute details are also very clear and informative for forming an image of the happenings in our mind. Good one and keep up the good work
Read more
Helpful
Comment Report abuse

anil prabhakar
4.0 out of 5 stars An ideal weekend read
12 January 2016
Format: PaperbackVerified Purchase
G V Subba Rao is a master storyteller.... No Murder tonight has all the ingredients of a potential bollywood blockbuster.
A page turner of a book, it is worth a buy. The production values like the paper quality, printing and cover are first rate. I shall definitely look forward to the author's forthcoming books.
It is really creditable that GV has found time from his business activities to pursue his passion and be successful.

Azk
5.0 out of 5 stars Intriguing and suspenseful
9 April 2018
Format: Kindle EditionVerified Purchase
This was a well written and really a deliciously dishy treat. It was a pretty good book! I enjoyed the characters, and I enjoyed the story line. This novel moves pretty fast and I was hooked on it pretty early on!
Read more
Helpful
Comment Report abuse

SRD
5.0 out of 5 stars Excellent!
6 June 2018
Format: Kindle EditionVerified Purchase
Thriller of a book. Finished in just about 2 sittings. Kudos to the author for the characterization and the entire plot.
Read more
Helpful
Comment Report abuse
There are 32 customer reviews and 33 customer ratings.
See all 32 customer reviews
Write a product review

Go to Amazon.com to see all 1 reviews 4.0 out of 5 stars
click to open popover
Unlimited FREE fast delivery, video streaming & more
Prime members enjoy unlimited free, fast delivery on eligible items, video streaming, ad-free music, exclusive access to deals & more.
> Get started
Back to top
Get to Know Us
Connect with Us
Make Money with Us
Let Us Help You
EnglishChoose a language for shopping.
© 1996-2020, Amazon.com, Inc. or its affiliates