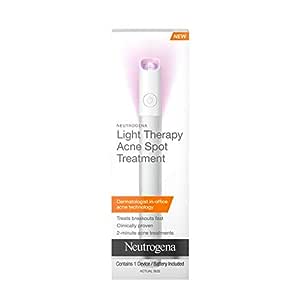 Item is in your Cart

There was a problem adding this item to Cart. Please try again later.
We do not have any recommendations at this time
Continue shopping

by Neutrogena
3.9 out of 5 stars 472 ratings
Not Returnable
Currently unavailable.
We don't know when or if this item will be back in stock.

Neutrogena Light Therapy Acne Spot Treatment, which is a perfect solution for your acne

3.9 out of 5 stars
3.9 out of 5
472 customer ratings
How does Amazon calculate star ratings?
Amazon calculates a product's star ratings based on a machine learned model instead of a raw data average. The model takes into account factors including the age of a rating, whether the ratings are from verified purchasers and factors that establish reviewer trustworthiness.

Dwaipayan Mukhopadhyay
5.0 out of 5 stars Amazing product worth every penny
Reviewed in India on 26 August 2018
Verified Purchase
The product is imported, so it took a weeks time to arrive. I have been using this product for several months now and I think the results are very good. It is suitable for suppressing big acnes once they start coming up. Works like magic.
Read more
4 people found this helpful
Helpful
Comment Report abuse

sim87
4.0 out of 5 stars Works for me... I think.
Reviewed in India on 22 September 2018
I've been using it for few days now...and have tried it on couple of breakouts. It appears to shrink the size of the pimple and dries it out faster than using benzoyl peroxide alone. Although, I must mention that I'm not sure if the device is effective alone or not. Immediately after using this device, I apply benzoyl peroxide gel on it. Earlier while using the BP alone, pimple would take about 4-5 days to clear up, but using both the device and BP together, it clears up in 2-3 days. So far I'm happy.
Fair warning- you need patience to keep holding the device for 2 min. And make sure you don't shine it in your eyes by mistake.

Will update if notice anything else about it.
Read more
12 people found this helpful
Helpful
Comment Report abuse
See all reviews from India

Amazon Customer
5.0 out of 5 stars I really love this product
Reviewed in Canada on 5 February 2018
Verified Purchase
I really love this product. Its exactly what i wanted. Would only recommend for people with small occasional breakouts. It goes through batteries pretty fast but I bought rechargeable AAA batteries and its perfect!!
Read more
One person found this helpful
Helpful
Sending feedback...
Thank you for your feedback.
Sorry, we failed to record your vote. Please try again
Report abuse

Megan Bradshaw Benesh
1.0 out of 5 stars One Star
Reviewed in Canada on 26 April 2018
Verified Purchase
Dont think it does anything.
Read more
Helpful
Sending feedback...
Thank you for your feedback.
Sorry, we failed to record your vote. Please try again
Report abuse

generic1
3.0 out of 5 stars Light treatment is effective - but very finicky about whether it will turn on
Reviewed in the United States on 18 December 2017
Verified Purchase
Love / Hate this device.

LOVE:
Its red and blue light is effective.
Faster pimple healing by far.
Best results if you can catch problem before it turns into a significant pimple. (I get a clue by feeling a little pain in an area, or a little redness before appearance sometimes, and I treat those indicators with good success)

On existing large pimples it does help it resolve faster, but not as fast as catching them early.

RELATED INFO:
I tried a LightStim device before this. Unfortunately, LightStim triggered wicked migraines if I even caught the merest of glimpse of the edge of the light with my eye. Nothing could effectively shield my eyes to not allow the migraine to be triggered. So I had to send it back. Was a real pity, because it was a larger device covering more area and it worked on standard electricity rather than battery power. In contrast, this tiny device, which I expected to not work at all, does work, and also does NOT trigger my migraines even if I accidentally see a bit of the light for a moment. While there is the obvious difference in number of LEDs between these devices, there's also a "lip" around the edge of the Neutragena light. The plastic lip contacts your skin but the light is held just s smidge above that edge. That lip prevents a great deal of light escaping out the sides. You still see a "glow" through your skin - but the Lightstim device had no lip and therefore it was pure LED light if you glimpsed it while in use. (And there was no way to avoid seeing the LightStim light if you used it on a cheek for example. ) This Neutragena device is a little too small to be used for prevention very effectively - but the larger device would have been much better for that purpose. Why don't I buy the Neutragena mask? Lights too close to my eyes will likely be a problem again.)

HATE:
This Neutragena device has an issue - it will report any battery, new or old, alkaline or rechargable - as dead when it is not. I can get anywhere from 1 to 4 two-minute sessions when suddenly it will beep three times indicating the battery is flat. At first, I believed it was accurate and kept changing batteries. But then it happened quicker and quicker on new batteries. So I ordered a set of rechargeable Enloopes here on Amazon. It keeps telling me even those are dead too. They are not. Here's the oddest part --- if the device tells me the battery is dead by beeping 3 times when I try to turn it on, I can let the device alone for maybe 5 minutes. Then it will work again ... and ... fail again. Another five minutes, it works again, then fails again.

So, all those folks who think it is eating batteries --- maybe it is like mine where the battery is not dead, but the device is faulty.

I am debating over buying another just to see if it works better regarding power consumption - or another brand of device entirely. For sake of clarity, 10 minutes per day of mid-day sun on my bare face keeps me completely clear of breakouts better than anything else (as long as I continue my usual skin care routine that also prevents acne). As winter came, the UV rays that create that benefit are not available. So this was my "get me through winter" without breakouts effort. (Moderate - a mix of types - some cysts mostly other inflammatory types) Light, whether UVB or this red/blue LED combination, is extremely effective for me. The sun never triggers my migraines though.

(Please don't comment to me about the dangers of the sun. I'm aware.)
Read more
201 people found this helpful
Helpful
Sending feedback...
Thank you for your feedback.
Sorry, we failed to record your vote. Please try again
Report abuse