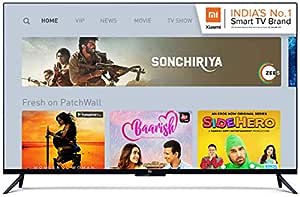 by Mi
3.8 out of 5 stars 220 ratings
| 371 answered questions
10 Days Replacement
1 Year Warranty
1 Year Warranty
1 year warranty on product and 1 year extra on Panel
Currently unavailable.
We don't know when or if this item will be back in stock.
› See more product details
Save up to 28% with GST input credit

The Mi LED TV 4 PRO 138.88 cm (55) dons features such as Full-HD ultra bright display, 64-bit quad-core cortex A53 with Mali-450 MP3 for smooth interactions , PatchWall comes with over 7,00,000 hours of content right on your home page that adapts automatically according to latest trends and topics, multiple ports to connect upto 3 HDMI devices(1ARC) and 3 USBs along with SPDIF, 3.5mm Aux-in. The simple 11 button Mi Remote can control both TV and set-top box (Mi IR Cable required). The Mi LED TV 4 PRO 138.88 cm (55) is the smart Android TV that has almost everything that you are looking for in a TV and is super easy to use.

• The Mi TV Pro series is based on the Android TV OS and it supports the Bluetooth 4.2 version. Since Bluetooth profiles differ according to devices (headphones and speakers), some devices may not connect or work properly.

3.8 out of 5 stars
3.8 out of 5
220 customer ratings
How does Amazon calculate star ratings?
Amazon calculates a product's star ratings based on a machine learned model instead of a raw data average. The model takes into account factors including the age of a rating, whether the ratings are from verified purchasers and factors that establish reviewer trustworthiness.

Nitish Singh
1.0 out of 5 stars Poor TV with no quality control
Reviewed in India on 22 January 2019
So, here is my story.

I am writing a review to encourage people to learn about the problems of the TV.

I got the panel from Mi.com. It was delivered according to the scheduled delivery date. However, the installation was delayed a couple of days. Not a big deal as I can wait for two days.

The first 3-4 months, the TV worked flawlessly. The picture quality was amazing and so on. I didn't think that I can get a better TV at that price. However, due to my lack of knowledge of TV and panel, I found the TV to be good quality.

However, I was so wrong!

Original Panel
The panel started to give problems in the 4th months. Two bright spots were generated at the top edge of the screen. That's why I raised a complaint to Mi. Their engineer called and said he would come. He delayed it for a few days, but I had my patience, so I waited. When the engineer came, he didn't acknowledge the problem with the panel. It took me 15 mins to make them see it!

After I convinced them, the engineer said that it is hard to showcase the problem to the headquarters and hence left by saying if it grows more, then do another repair request. So, I waited for a week, and the white clouding spots grew more, increasing from two to three. This time, they came and accepted the defect after I convinced them that there is a problem.

1st replacement panel
It took them ten days to deliver which I don't mind. It is a long process. After the panel came, the technician visited my place to fix it. The installation was done. However, the panel had more issues that the first one. It had 7-8 white clouding spots at the top edge. Out of frustration, I opened a new repair request. The engineer called me and was slightly rude to me. I explained the problem, and he asked me to wait again, telling me if the problem increases, then he will come.

Then, I waited for a week more, to find out that there is a black line generating automatically at the top. It was most probably the panel getting distorted due to pressure or bad build quality. I called the engineer and he came the very next day. He took photos and left saying that the panel will be replaced again. Awesome, I need to wait again for another panel?

2nd replacement panel
The 2nd panel came after eight days. I was slightly relieved as at least I am getting the service. But, the 2nd panel was also defective!! It has three white spots(not cloud) at the middle of the screen. This was one of the worst experience for me. Also, there was 7-8 dust stuck on the bottom section of the screen. I again raised a repair request. The engineer came, took photos and said the new panel would come in 8-10 days.

3rd replacement panel
The third replacement panel I received was better than the rest, but not free from any flaws. It was suffering from VERTICAL banding, which is also known as dirty screen effect. Technically, horizontal or vertical bands were seen when there is a uniform background, bands are seen. It is most prominent when the background is 5-20% gray which is close to the black color.

This means that watching sports, playing games would become hard on the TV. This time, I didn't go for replacement again as I feel harased. I will stick with the TV for now as it only impacts 1-2% of my viewing experience. Games are the most annoying to play as the bands are shown when there is a fast moving background horizontal image.

In short
Don't go for this TV if you are looking for something good. All panels suffer from one problem or other. And, not to mention, the panel is not A+ grade. All of the Samsung 10 bit panels used in Mi Tv 4 have some form of defect which the general audience would not catch at all.

KB
1.0 out of 5 stars Got used product.
Reviewed in India on 21 March 2019
Verified Purchase
When I opened brand new Mi LED 4 PRO 55 TV, I saw already one gmail account was configured in it, and remote was looking old, and polished. I suspected that I got used item, or could be a display TV which was in use, initiated return and waiting for new one.
Read more
183 people found this helpful
Helpful
Comment Report abuse

Same problem with google voice assistant. It is not working.

Then returned and purchased tcl 55 inch android tv, which is working flawlessly

1. Voice command not works. When I click and hold the mic button, nothing happens. after releasing, a popup google assistant window open from bottom and asking " what can I do"

If i replied anything, it is not having any response and tv hangs for 10 seconds approx.

2. USB hub (usb3) not working properly. Video get stuck frequently (720P) and audio is playing as per video. My earlier tv was having no problem with same usb hub

3. while connected to bluetooth sound bar, voice scatters (distortion) after 10 minutes or so. scatters a lot and doesn't understand. My friend also have MI 32inch TV. he also have same problem

5. NO subtitles or subtitle setting if you are playing from your pendrive / hard disk in default media player by opening direct pendrive.
If you want to see subtitle, download mxplayer from apps and select files from MX player. it will work.

Even I made phone call to MI official customer care regarding the voice command issue, she told me to reset, uninstall google accouunt, remove cache files etc and I followed her commands. but no use. still problem is there
Also for the subtitle problem. they told tha this tv dont have subtitle option. nothing can be done. they are ignorant of the MX player or external mediaplayer use..

8. Option for integration firestick remote or set top box remote with mi remote. But it doesn't have all functions active

earlier I was using samsung TV (2013) which was not having any issues with same accessories, same video files etc.

I tried changing the port also, but no use.

Hope i answered untold problems.
If any doubt please reply.
Hope the photos and review helped you for making a choice
Be loyal and helpful
Read more

Raks pro
1.0 out of 5 stars Rude behavior of installation guy
Reviewed in India on 23 April 2019
Verified Purchase
Bought it for my father after waiting for 1 week the installation personnel came and was very rude with my father who is a senior citizen he refused to even install the television. The customer care promised that it will be fixed in 24 hrs but adding to there arrogance the installation guys called my father and said that the installation will be done after 3 days finally returning the product
Read more
59 people found this helpful
Helpful
Comment Report abuse

karthick
1.0 out of 5 stars Defective product sold by Amazon
Reviewed in India on 22 May 2019
Verified Purchase
I brought this tv on sale it was deliver to on 6 th may, after 14 days usage horizontal line appear in tv. I contacted amazon customer care they asked to follow with mi. Still now no any replacement or return made.
1.Amazon sologan buy with confidence please change it.
2.TV sound Quality is very poor 🙉🙉🙉🙉🙉🙉
Read more

VAMSHI REDDY
1.0 out of 5 stars Very low quality and no return policy even on 15 days as mentioned * be careful before purchase*
Reviewed in India on 15 May 2019
Verified Purchase
I got this product last week and not impressed with the picture quality or sound. If you compare that with the price you are paying, its not really cheap. LG 55 inch , similar product with great picture quality and sound comes at Rs10000 more.
For this product you will need a sound bar, and you can do nothing about the picture quality. Think before you buy. Do visit a retail electronic store to compare this with other products available in the similar or plus 10000 price range.
The amazon support has been very poor on this. There is no return policy once you buy it. The technicians sent are really bad.
First purchase of electronics on Amazon, will never do this again. Just go to a store.
Read more
42 people found this helpful
Helpful
Comment Report abuse
See all reviews from India
Unlimited FREE fast delivery, video streaming & more
Prime members enjoy unlimited free, fast delivery on eligible items, video streaming, ad-free music, exclusive access to deals & more.
> Get started
Back to top
Get to Know Us
Connect with Us
Make Money with Us
Let Us Help You
EnglishChoose a language for shopping.
© 1996-2020, Amazon.com, Inc. or its affiliates