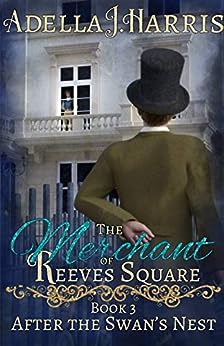 by Adella J. Harris (Author) Format: Kindle Edition
See all formats and editions
Sorry, there was a problem loading this page. Try again.
Sir Arthur Holden was lonely. That had to be why he found the private inquiry agent, Henry Parker, so intriguing. Simple loneliness after he'd gotten his two best friends arrested in a raid on a molly house he'd recommended. Now they're both out of prison, but William is living in Cornwall and Thomas is hiding in Yorkshire. And the intriguing Mr. Parker says he has a way to help Thomas come out of hiding. That would be the only reason to hire him. Nothing at all to do with wanting to see him again.

Adella J. Harris lives in Ohio where she writes, watches far too much British television, and reads anything with words on it. You can find a complete list of her books at AdellaJHarris.wordpress.com

4.1 out of 5 stars
4.1 out of 5
47 global ratings
How are ratings calculated?
To calculate the overall star rating and percentage breakdown by star, we don’t use a simple average. Instead, our system considers things like how recent a review is and if the reviewer bought the item on Amazon. It also analyses reviews to verify trustworthiness.
Top reviews

Zell Oakley
2.0 out of 5 stars Definitely the weakest in an otherwise great series
Reviewed in the United States 🇺🇸 on 8 March 2021
Verified Purchase
I read and greatly enjoyed the first two books in the After the Swan's Nest series; in fact I'd go so far as to say I devoured them. Unfortunately, the third book did not measure up to the promise of the first two.

I think the main issue I had with it is that neither Arthur nor Henry were particularly likable heroes. Henry especially came across as rather a smug creep to me, which was not helped at all by their odd and bizarrely squicky sexual dynamic. The other books in the series contained some sex, but not as graphic, as frequent, or, frankly, as uncomfortable as this book's sex scenes. It's rare that a gay relationship is as, let's say "unequal" as Arthur and Henry's, and it sort of creeped me out. I found myself dreading them, which was unfortunate when I reached the part where there were literally three sex scenes in a row.

Another issue I had was the plot itself; Adella Harris's plots usually involve a mystery of some sort for her characters to solve when they're not too busy falling in love. But the mystery here is both meandering and sort of dull. It begins with Arthur trying to help his friend Thomas, the protagonist of the first book in this series, get his life back, I suppose. The only problem is that, as anyone who read the first book could tell you, Thomas was doing just fine on his own. As far as we all knew, he was officially presumed dead and living happily with the Viscount of Elderberry or whatever. Anyway Arthur inserts himself into the situation and uncovers a nefarious plot of some sort or other, I wasn't really paying attention by the time the whole thing was revealed, I just wanted the book to be over.

Anyway, with it's gross sex scenes, boring and inscrutable mystery, and unlikable protagonists, this one is a swing and a miss for me. But in the unlikely event you skipped the first two books in this series, don't let this one deter you from other books by the usually excellent Harris.
Read more
Report abuse

E W
5.0 out of 5 stars a nice ending to the trilogy
Reviewed in the United States 🇺🇸 on 8 December 2019
Verified Purchase
It would be a toss up as to whether #2 or this one is my favorite book in the series, and in a lot of ways they are very opposite to each other.
I really enjoyed that the PoV of this story is from the more advantaged partner in the relationship, as it was nice to see the author explore the relationship dynamic from a different perspective. The "mystery" of this story is more in the forefront of the plot than the previous 2 works, and the story definitely had a tenser feel to it because of this.
I also thoroughly enjoyed the way this story was able to bring together threads from the previous books to give the trilogy a satisfying conclusion for all the characters.
Read more
2 people found this helpful
Report abuse

Kindle Customer
4.0 out of 5 stars A lovely conclusion
Reviewed in the United States 🇺🇸 on 11 February 2021
Verified Purchase
So this series had a lovely happy ending. This book had a bit had a bit more developed mystery plot that tended to be more a long the lines of a court case. It was a lot dryer material with all the legal matters. The PI also added to that feel I this book. This love story wasn't quite as sweet and endearing as book 2. I'm a sucker for hurt/comfort stories and that was much more so in book 2, which is my favorite if the 3. I still liked how each book has it's own character when it comes to the relationships. I also think the author's writing skills get a bit better from book 1 to 3. I find the first book a bit lacking at times. Overall it's a lovely, delicious series I would definitely recommend.
Read more
Report abuse

Wintermask
2.0 out of 5 stars Bad conclusion
Reviewed in the United States 🇺🇸 on 20 June 2020
Verified Purchase
This was by far the weakest in the After the Swan’s Nest series. It was needlessly confounding while managing to be quite boring in many places. It was obviously by an American author trying to write an English romance and the copy editing errors were egregious, going so far as to use the wrong name twice over a series of three or four paragraphs. This concludes the series, poorly.
Read more
2 people found this helpful
Report abuse

Kindle Customer
5.0 out of 5 stars I didn't want this book to end..Spoilers
Reviewed in the United States 🇺🇸 on 25 June 2020
Verified Purchase
I loved this book. The first two books talk about William and Thomas Arthur in this book is their friend. He has worried about those two guys alot. They got.their HEA so now.It's Arthur turn. He meets an investigator named Henry so they start.looking into Thomas prison break and a way to get him back into the world without question of his escape. The prison thinks he died and they are losing about it saying he done his time and walked out. Plus there are loud noises that are coming from Arthur Africa so that needs to be.solved. Great suspense and I loved the characters. All of them.
Read more
Report abuse
See all reviews
Report an issue
Does this item contain inappropriate content?
Report
Do you believe that this item violates a copyright?
Report
Does this item contain quality or formatting issues?
Report