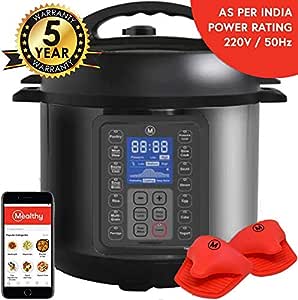 by Mealthy
4.8 out of 5 stars 681 ratings
| 217 answered questions
EMI starts at ₹280 per month EMI starts at ₹280 per month. Options
Returns Policy
Amazon Delivered
Amazon Delivered
Amazon directly manages delivery for this product. Order delivery tracking to your doorstep is available.
In Stock.
Sold by Authorized For: Kuvings, Coway, Mealthy & Cecotec (4.7 out of 5 stars | 261 ratings) and Fulfilled by Amazon.

Fulfillment by Amazon (FBA) is a service we offer sellers that lets them store their products in Amazon's fulfillment centers, and we directly pack, ship, and provide customer service for these products. Something we hope you'll especially enjoy: FBA items qualify for FREE Shipping and Amazon Prime.

If you're a seller, Fulfillment by Amazon can help you grow your business. Learn more about the program.

Offers from Top Brands
Up to 50% off : Dinner sets | Shop now

Frequently shopped for in related categories

Ajit D.
5.0 out of 5 stars A wonderful product and a must have for every home !!
2 May 2019
Size: Large SizeVerified Purchase
I already had a Wonderchef nutripot and wanted to add a second one. So my review would also be useful for people who are thinking to buy one of these two products.
One of the major reason for this purchase by me was that most of the recipes available for such programmable pressure cookers are written with the Instant Pot in mind and therefore I had to guess which of the pre-programmed buttons to use in the Nutri-pot as the latter is "supposedly" designed for Indian recipes. Moreover, I could not find how to play with the pressure level, if that is possible at all, in the Wonderchef product. After looking through the net, and lot of deliberations ( I was about to buy the Sage multipot from Amazon.uk but stopped due to insane customs duty that doubles the price), I decided to purchase this Mealthy one that has been modified to suite Indian AC power (220V/ 50Hz) and I am thoroughly satisfied except few small complains.

Pros: - 1. The display is really nice and very informative.
2. I can adjust all three parameters - pressure level (low/high), Temp (low/normal/high), and Time to suite my cooking style and the recipe ( I like to experiment with cooking).
3. The goodies supplied with the pot, in particular the silicon mittens, were of great use (wonderchef nutri-pot came with none).
4. The cooking pot (Stainless steel) is way better than the Wonderchef one both in terms of usage and also I presume longevity ( My Nutri-Pot one developed permanent stains within three days of use).
5. Mealthy pot allows cancelling the "keep warm" function during the cooking step while for Nutripot that is doable only after the cooking program is over and the pot shifted to the keep warm mode.

Cons: 1. Warranty could be better ( at this moment its only 6 months) for the peace of mind of the buy and the confidence.
2. A ceramic coated non-stick inner pot would have made the product perfect in lieu of the stainless steel one. Even such a pot could have been designed and sold as an accessory.
3. Unlike the Sage one, (which has adjustable pressure levels in 0 to 80 kPa with 10 kPa per step) this has only two pressure levels. Though this is really minor, as I can hardly imagine people playing with such detailed pressure levels. Though a person like me would have really enjoyed having at least one more pressure level in between the low and the high one.

In summary, I feel this is the best electric pressure cooker available in the Indian market as of now and is a must have product for every home. I find it really comfortable to cook with this product even in the hot summer days (my kitchen does not have AC!) which was nearly impossible with the conventional cooking system. I find that a modern kitchen is nearly complete with this product, a halogen oven, and a microwave for all cooking/heating requirements!

Deepak Gajender
5.0 out of 5 stars High quality electric pressure cooker with international cooking options..
2 May 2019
Size: Large SizeVerified Purchase
I was originally in the market for an Instant Pot after stumbling across various Instant Pot cooking videos on YouTube, checked the price on Amazon and it was an import price that was more than double the actual cost of the appliance and this was quite disheartening. Since I was now sold on the idea and versatility of a multipot, In my search for an alternative, I went through the other options for pressure cookers from Indian vendors on Amazon and was looking for a close match so that I could adapt the instant pot recipes to them.. Then saw the Mealthy Multipot and could not believe that it was at almost the same price as the international version.. checked a videos about it on YouTube, read some reviews, saw their international Ad for it (which is much better and funnier than the cut down Indian ad). In the end I found this to be a much better deal than the Instant Pot. This rarely happens where you find something better for cheaper. So I bought it.. : ]

Ordered it on on 24 March, but I guess I was one of the first few who bought it so the first batch of stock was probably still on its way and it was delivered on 20 April. However, this seems to have changed now and on the product page I see that it now has much shorter delivery timelines compared to the weeks that were quoted when I ordered. So that is even better for future customers.

Onto the packaging. Its good, it came with a brown outer cardboard box, inside was the Mealthy product box with everything as advertised inside.. nothing was damaged and everything was packed properly with thermocol\Polystyrene for the main appliance and bubble wrap and plastic for the other accessories.

In the packaging you also get a fairly decent amount of literature - Cheat Sheet, Getting Started guide, quick reference for cooking times for various food, a full user guide, and even a small custom recipe book with Indian recipes... Was also pleasantly surprised to see that there is an Indian version of the Mealthy website with Indian recipes and you can register your device for a warranty here.

Now the Multipot had all the same markings and safety warnings as the international edition as seen on YouTube, it also included all the accessories as well. This was quite pleasing as on the Indian market more often than not we seem to get a sub par experience or options. This kind of stuff floats my boat, so to say.. : )

Everything on the Multipot and the accessories were pristine - no scuffs or scratches or any evidence of it being refurbished etc.. The accessories make me quite contended as I thought I would need to buy extra items looking at the options by other vendors on Amazon. The only thing I would immediately buy if you do not have it already is a pair of silicon tongs so that you can flip stuff in the pot or pick stuff out of the pot when hot... Apart from that it is awesome that you get an additional gasket!, a trivet, a steamer basket, measuring cup, rice ladle, soup ladle, and silicone mitts as part of the package, as quite a few recipes call for this. More manufacturers should include such commonly used items like this.

The controls are fairly straight forward and even if you are having difficulty with it you can refer to the manual or watch videos online.. The presets make like so simple, I was wondering why I didn't get once sooner. e.g The other day I wanted to cook 6 hard boiled eggs, looked it up online and all I had to do was put in a cup of water, place the eggs on the trivet, seal it and hit the eggs button. lol.. if that isn't simple enough I don't know what is.

My primary reason for a multipot was to pressure cook, steam and slow cook stuff. This appliance meets my trifecta of needs very well and although the price seems a bit higher, the quality of the appliance and the bundled accessories justifies the cost, in my opinion. Especially considering the versatility of it.

Only thing I am waiting for is, additional minor spare parts like gaskets etc to be available for purchase on amazon.

The experience I have had so far with this device is quite satisfactory. Highly recommended.
Read more

100 people found this helpful
Helpful
Comment Report abuse
There are 627 customer reviews and 681 customer ratings.
See all 627 customer reviews
Write a product review
Unlimited FREE fast delivery, video streaming & more
Prime members enjoy unlimited free, fast delivery on eligible items, video streaming, ad-free music, exclusive access to deals & more.
> Get started
Back to top
Get to Know Us
Connect with Us
Make Money with Us
Let Us Help You
EnglishChoose a language for shopping.
© 1996-2020, Amazon.com, Inc. or its affiliates