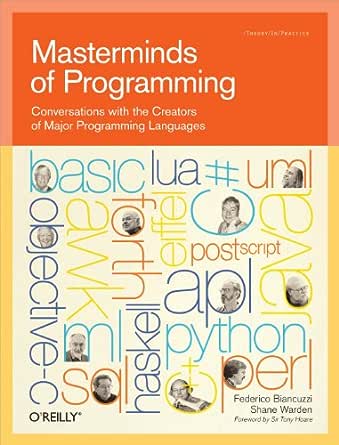 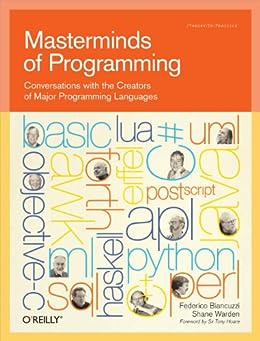 If you're interested in the people whose vision and hard work helped shape the computer industry, you'll find Masterminds of Programming fascinating.

Shane Warden manages Onyx Neon Press, an independent publisher. His areas of expertise include agile software development, language design, and virtual machines for dynamic languages. He is also a published novelist. His books include The Art of Agile Development and Masterminds of Programming.

Thomas B
5.0 out of 5 stars A great view of how solutions are created in software
16 June 2014 - Published on Amazon.com
Verified Purchase
There are many programming languages in the world and this book is a series of interviews with many language creators. Programming languages are many and you may have wondered why that is so and this book answers many questions you might have had about the who, what, where and why of languages like C++, UML, C#, Java, Lua and much more.

It's one of the books that takes your understanding from how things are done to why things are done and you hear it directly from the horse's mouth. Great programming languages have been created to solve problems and as we understand those problems and encounter issues in creating the solutions new programming languages are created to make us more effective in developing the solutions.

Craig Cecil
4.0 out of 5 stars Educational and historically rewarding journey
28 March 2011 - Published on Amazon.com
Verified Purchase
This book provides an interview format where the author (interviewer) asks the same questions (for the most part) to the creators of popular programming languages (C++, Python, FORTRAN, BASIC, Haskell, UML, Postscript, etc). This format allows the reader to compare and contrast the thought processes, perspectives, and beliefs among the various creators. In that vein, it really succeeds, and you'll no doubt notice many more similarities than differences. But when there are differences, they are vast and evident in the resulting language (for example, strict typing versus loose typing, or the design of garbage collectors and extension mechanisms). At times, the book gets very technical, but is very educational in that respect. Recommended for serious students of computing history and programming language theory.
Read more
2 people found this helpful

J. B.
5.0 out of 5 stars Indeed, there are entirely different ways to program
8 June 2013 - Published on Amazon.com
Verified Purchase
Nice to see a wide variety of programming languages discussed, other than the mundane derivatives of C.
My favorite chapter was FORTH, a programming language unrelated to any other,
which provides insight into the genius and unconventional thinking of Chuck Moore.

Kindle Customer
5.0 out of 5 stars For a long and detailed set of interviews it feels short
11 January 2015 - Published on Amazon.com
Verified Purchase
Must reading for anyone in the field. It doesn't so much answer questions as give you insight into the thought process of the the developers of some of the most influential programming languages.
Read more
One person found this helpful