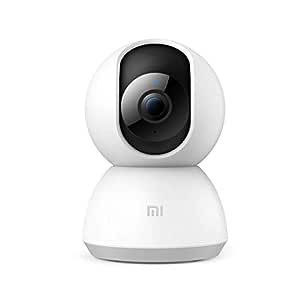 Technical Details
Technical Specification
Additional Information
Warranty & Support
Warranty Details: 6 months
Feedback
Would you like to tell us about a lower price?

4.3 out of 5 stars
4.3 out of 5
7,852 customer ratings
How does Amazon calculate star ratings?
Amazon calculates a product's star ratings based on a machine learned model instead of a raw data average. The model takes into account factors including the age of a rating, whether the ratings are from verified purchasers and factors that establish reviewer trustworthiness.

Rahul T
4.0 out of 5 stars Overall I'll call it value for money although it has several limitations
Reviewed in India on 5 November 2018
Verified Purchase
It consumes around 10gb of storage in 24hours in 'HD' mode.
Pros :
Night mode recording.
Clarity of camera.
Multiple users can watch camera recording at same time.
Two way communication.
1080p HD recording.
Can record videos without internet , requires internet connection after switching camera on - after that you can disconnect & recording will continue.
I

Cons:
It doesn't support AUTO 360° rotation. User has to manually adjust camera from application.
If there is a power outage or by any chance you disconnect power source , camera would start recording again after you connect it to internet.
You need to keep camera connected to a power source for 24hours - charging option would've been helpful here.
Application sometimes sends motion alerts after delay of 30minutes(approx).
Memory card of storage capacity greater than 64gb are not supported.
Read more
713 people found this helpful
Helpful
Comment Report abuse

Amazon Customer
5.0 out of 5 stars Under 3K best ip cam from Mi
Reviewed in India on 20 October 2018
Verified Purchase
Pros:
1) Simple install (only first time you need to configure with camera + router through Mi Home app, after that if you power off your router or camera and it will automatically reconnect when these are switch it on)
2) 1080p HD cam(view full frame also, without moving the camera angle you can see the full frame view)
3) You can monitor from remote end (need good internet both in router and mobile, otherwise start buffering)
4) two way talk
5) share your camera to your family member( both are should be in same server)
6) good look( only one colour- white)
7) value of money
8) support upto 64 GB micro sd card
9) Record video without internet also (some of the amazon customer commented that it will not work without internet. It is totally a false statement)

Pothi Kalimuthu
3.0 out of 5 stars Other than initial hiccups, some (Mi Home app) software bugs, it is good for monitoring!
Reviewed in India on 30 December 2018
Verified Purchase
Remember... nothing is perfect. Xiaomi has already released home security cameras using other brands such as Yi. And the home security camera market is yet to be adapted in large. So, you can expect a lot of misunderstanding on how everything works together in a home security camera in general.

Initial setup: It is a breeze for some, but pain for others. See the 1-star ratings if you want proof. I had trouble getting this camera recognized by its own app (Mi Home). It took about 1 hour to recognize after trying with different lighting conditions. The camera got disconnected from the app, after I switched the SSID of the router. So, I had to pair it again. This time, it took more than a day(!) of trial and error. I had to keep the camera under bright sun light in order to get recognized by the Mi Home app. Lesson learned in a hard way.

Bandwidth requirement: This camera requires 24x7 connectivity with solid internet connection and with good upload bandwidth. Even if you have 100mbps connection, this camera can only be connected via wireless. So, longer the distance from the router, shorter the bandwidth. This camera hangs up, if it doesn't have enough bandwidth. If you add NAS storage, you'd need even more bandwidth between the camera and the router. The camera is very sensitive. If you set up any conflicting configurations, it'd just hang and would not record anything at all, even in the on-board SD card storage. If the camera hangs for a particular reason, you have to restart it. It is a pain to troubleshoot things when you are miles away from home in another city.

Mi Home app requires almost all the permissions from your phone. But, I was able to disable most permissions except location and storage. What's more! You get ads in the app right after opening it (on the dashboard where you see the list of devices) since version 5.4.43 (released on Dec 26, 2018). I wish Xiaomi released a dedicated app for home security cameras, like other companies have done.

Google Assistance isn't compatible with this camera, if you are into that sort of thing. Some other cameras from Xiaomi (not released in India) are supported, though.

Once paired to the app and once you have the perfect setup (with NAS and good wireless bandwidth to / from the camera), you may become addicted to use it under different conditions, such as with total darkness.

If you are technically sound and have around 10k budget, Raspberry Pi based home security is a better option! If you are on a budget and if you don't want to spend a lot of time on technical things, then, Xiaomi Mi Home Security Camera is the best home monitoring camera you can get!
Read more

Krish B
1.0 out of 5 stars Installation Issue
Reviewed in India on 1 December 2018
Verified Purchase
Any future buyer.. this product may be a good one for lucky ones only... My experience is
1. Inadequate information about network connectivity... You won't be able to connect to wifi if it is higher than 2.4 Ghz. You will come to know only when you try to configure it for the first time :(
2. You are really lucky if this camera can read QR code in your phone during setup. I spend a whole day and no luck. Then , after google, I realised that this is a known issue. Even you would found this issue reported by another customer, here
3. Its not directly sold by MI. A retailer who's phone given by Amazon customer support is found always switched off
4. So as I couldn't even complete initial setup using high-speed cable broadband or using Airtel Dongle. I can't comment about how good or bad its rest features...
Read more
135 people found this helpful
Helpful
Comment Report abuse

Vibu Poongode
1.0 out of 5 stars No cloud storage
Reviewed in India on 30 October 2018
Verified Purchase
Unfortunately no cloud storage service...so I returned it.... Product is only for indoor use...
Read more
66 people found this helpful
Helpful
Comment Report abuse

Damanjit Singh Minhas
3.0 out of 5 stars Defective product and got it replaced at MI service centre
Reviewed in India on 9 December 2018
Verified Purchase
Was Unable to connect and use the camera. Finally went to the MI service centre and got a replacement at no additional cost. Finally it's working and operational now .....
Read more