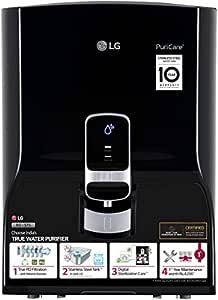 Amazon Delivered
Amazon directly manages delivery for this product. Order delivery tracking to your doorstep is available.
10 Year Warranty
1 year on product and 10 years on stainless steel tank from Manufacturer
In stock.
Sold by JADUI CHIRAG and Fulfilled by Amazon.
New (17) from ₹ 15,979.00 + FREE Shipping

Please be advised to test your water TDS source before buying a Water Purifier. Buy a TDS meter to check for same.

Offers from Top Brands
Up to 50% off : Dinner sets | Shop now

3.8 out of 5 stars
3.8 out of 5
121 global customer ratings
How does Amazon calculate star ratings?
Amazon calculates a product's star ratings based on a machine learned model instead of a raw data average. The model takes into account factors including the age of a rating, whether the ratings are from verified purchasers and factors that establish reviewer trustworthiness.

Amazon Customer
5.0 out of 5 stars Great to Buy
Reviewed in India on 26 November 2018
Verified Purchase
Recently I bought this water purifier at the price of 16000 and after using it for a month I really like the product as the TDS of the water remains the same all over even after one month of usage.
After the delivery of the product I got the call from customer care regarding installation and all and within few hours the concerned person was at home to install it.
Design the product is great and looks good. Best part is that we get stainless steel tank in it which make the water clean and don’t add any bacteria to the water. The stainless steel tank is way safer than a plastic tank.

We get 3 filters in the body which provides best purified water out of it. The 5 stage water purification works really well and it ensures that you are getting safe drinking water. The purifier has smart LED in front of it which notifies you when tank get full or empty.

Overall in this price I would suggest you should go for it.

Himanshu Sewalkar
1.0 out of 5 stars Poor quality product and extremely poor customer service
Reviewed in India on 15 November 2018
Verified Purchase
The product stopped working within a month after purchasing. The customer service of LG is very poor. Most of the time the contact number doesn’t get connected and service engineers are clueless how to fix.
Read more
52 people found this helpful
Helpful
Comment Report abuse

HRahman
1.0 out of 5 stars LG Water Purifiers are Terrible
Reviewed in India on 6 September 2019
I would like to raise the issue of how the BAD quality of a LG product has affected me. I live in Chennai.

This issue is about a LG water filter. I bought the filter around 4.5years ago (end 2014). Some 2 years ago (sep 2017, roughly), the filter stopped working. The technician came, checked and said that the main motor has been spoilt, during to hard water. The outside of the motor was caked in hard salts.

I took his word for it, and asked to replace the motor. It cost me 3000rs, including service charges. Note that the technician was incompetent and did not check for any leaks within the filter.

So we come to August 2019, the present date, and the filter stops working again. I again call up LG service and they send me the same technician again. The issue is exactly the same as 2 years back. Motor spoilt, and the outside caked in hard salts.

Anyway, I asked him to replace it, which he did. Again the incompetency of the technician is on display because he once again does not check for any leaks inside the filter. You (LG) people do understand that wherever there are pipes taking water IN and OUT, there is a possibility of leaks, CORRECT? Should he not have checked for it? Isn't it part of your service engineer's manual? Clearly it is not. Shame.

He quickly tries to close the back cover, and I tell him that I need to check for leaks. He says there is no need for such checks. Anyway, I insist, and I quickly see that there is indeed a leak!!!, and that the water droplets are falling on the motor.

It is then that I realised that the motor problems, both times, were due to the leakage from a certain Valve system inside. In fact, the motor clearly has brown marks showing how the water droplets fell on it, for months on end, and finally getting spoilt.

LG's incompetent technician very adamantly insists that the motors (both times) were not spoilt due to the leakage. He thinks I am an illiterate fool. I fully understand that admitting to this will make LG culpable in the BAD quality control of your products, so you LG fellows will never admit to your fault. But, I will spread these words, wherever I can (Google Reviews, etc.)

So, coming back to the valve system which was leaking, I found that there was a crack around the area which houses the screw locking the mechanism. The crack was filled with rust from the screw. The screw was clearly tightened too much during manufacturing process. Because there was no tight locking, there was a leak, which spoilt the motors, TWO times. The poor quality of LG product has caused me to buy motors for 2 times. A total cost of 5000rs.

Lg should be ashamed of its quality control.

In the matter of following good business principles, meaning taking responsibility for your faults, I think LG has FAILED big time.
Read more

Himanshu
1.0 out of 5 stars High Maintenance and a lot of water wastage
Reviewed in India on 10 July 2019
Verified Purchase
1. Annual maintenance is too high approx 15k.
2. Water wastage is high, for each 1 liter of RO water, it wastes/has to throw another 2 liters. I.e. 1 liter per 3 liters.
Think about it, when we r talking about saving of water.
3. No water level visibility low water indicator.
Read more
25 people found this helpful
Helpful
Comment Report abuse

Prashant
1.0 out of 5 stars Ph = 6 !
Reviewed in India on 8 December 2018
Beaware guys
the ph level of the water becomes very less i.e ph = 6 and according to the standard (all over the world) ,drinking water ph should always lie between 6.5 - 8.5 and there is no permissible limit in any manner.
Drinking water which has low ph can be detrimental to health and can cause metabolic acidosis which is an serious health issue
i bought this ro from showroom, and when i registered a complaint regarding to this issue , lg engineer said we can't do anything( i was like wtf is this ) ,then i said to him" this issue is not my problem it's your company's fault to not balance the ph of this ro" then again he said we can't do anything .
when i bought this, my initial thoughts about this ro was really good, but now it dissapoints me in ph level.
My final Verdict - Be Safe guys and always stay away from that purifier's which are unable to balance ph level.
Thats it.
Read more
49 people found this helpful
Helpful
Comment Report abuse

Siddharth
5.0 out of 5 stars Great quality product
Reviewed in India on 24 October 2019
Verified Purchase
Using for a month and no problem so far. Good quality product from LG. Taste is also good.

Cons
1. Service cost is pretty high
2. Three technician visit every year after every 4 months ( 3 visits are free for 1st year after that you have to pay for every visit).
3. Filter cost are also high around Rs 4000-4500

Verdict: its a good water purifier but service cost is high so I recommend to get extended warranty.
Read more