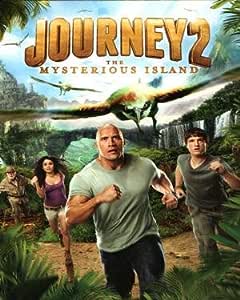 As the title depicts Journey 2 The Mysterious Island movie is filled with mystique, adventure and action. Directed by Brad Peyton, it is a sequel to the 2008 film Journey to the Center of the Earth. Sean Anderson (Josh Hutcherson) and Hank (Dwayne Johnson) embark on a new journey that begins when Sean receives a coded signal from his grandfather which leads them to three books Treasure Island, Gullivers Travel and his own Mysterious Island. They use the individual maps from the books to decipher the Jules Vernes codes and decide to head out in the search of this mysterious island. Will they find this island? What is in store from them? Catch all the exciting adventures in the Journey 2 The Mysterious Island full movie.

The Journey 2 The Mysterious Island 3D movie gains pace as Hank helps him decode the message. With the help of one of the locals Gabato and his teenage daughter Kalani, all of them commence their journey when their helicopter crashes in the Pacific. When they wake up, they realize that they are on an island. While all big animals are small in size, the smaller critters are enlarged on the island. What follows are the troubles they encounter during their sojourn, facing hurdles and danger. Will they be able to escape from this strange yet beautiful island? Would they find Alexander and the legendary Nautilus who would be the only one who could get them out of this sinking island? Find out in Journey 2 The Mysterious Island Blu Ray.

4.4 out of 5 stars
4.4 out of 5
196 customer ratings
How does Amazon calculate star ratings?
Amazon calculates a product's star ratings based on a machine learned model instead of a raw data average. The model takes into account factors including the age of a rating, whether the ratings are from verified purchasers and factors that establish reviewer trustworthiness.

S.Venkatnarayanan
5.0 out of 5 stars Who's up for an Adventure? - Good movie. I love Dwayne Johnson.
Reviewed in India on 3 August 2017
Verified Purchase
Oh! what a crystal clear picture and sound. Its really worth buying this 3D blu ray disc. However, 3D effects aren't so great as like part one ''Journey to the center of the Earth'', which really has eye-popping 3D effects. But still, there are some scenes really has its 3D moments. Audio is in Master HD-DTS. Only one disc. This disc has no extras.
Read more
Helpful
Comment Report abuse

Viks_2301
5.0 out of 5 stars Beautiful Color
Reviewed in India on 8 June 2015
Verified Purchase
Amazing color of flora and fauna on this 3D. Full Screen picture which is ++++ Using Sony 4K TV
3D effects are good. I expected more but its definitely worth watching.

sandip agrawal
1.0 out of 5 stars One Star
Reviewed in India on 27 January 2018
Verified Purchase
This blueray is not playing in 2D mode and this was not mentioned during online purchase.
Read more
Helpful
Comment Report abuse

E
5.0 out of 5 stars Great 3D. Product as described
Reviewed in Canada on 16 March 2019
Verified Purchase
I am not reviewing the movie itself, formthis I encourage the use of IMDB.com (Amazon owns it!). The product itself, though, is exactly as described; it works in North America.
Read more
Helpful
Sending feedback...
Thank you for your feedback.
Sorry, we failed to record your vote. Please try again
Report abuse

wisdomstar
5.0 out of 5 stars Should be on the top of the list of great movies you have never heard of
Reviewed in the United States on 20 February 2017
Verified Purchase
I am new to the 3D movies having just got a region free 3D player for Christmas. I love Michael Caine so this had to be in my collection. Surprise! It is an excellent movie - great acting, great scenery, believable CGI, full of action and suspense. Stretches credibility at times, but it is a Jules Verne sort of story. I have a new respect for Dwayne Johnson as an actor - you are really pulling for him in this movie. San Andreas was good too. The kids were good too. Highly recommended for an evening of adventure.
Read more
14 people found this helpful
Helpful
Sending feedback...
Thank you for your feedback.
Sorry, we failed to record your vote. Please try again
Report abuse

Mark Baker - Carstairs Considers
4.0 out of 5 stars "Why Did It Have to be Lizards? Why Couldn't It Have Been Snakes?"
Reviewed in the United States on 27 May 2015
Verified Purchase
I seem to be one of the few who enjoyed Journey to the Center of the Earth when it was released a few years back, so I was surprised to see a sequel was planned. I guess the original made enough money. I knew immediately I'd be going to see Journey 2: The Mysterious Island. And I enjoyed it, too.

In the time since his first adventures, Sean (Josh Hutcherson, the only returning cast member) has become a Jules Vern fanatic. Which is why he immediate recognizes a code he's gotten made of character names from Jules Vern books. Along with his step-father Hank (Dwayne "The Rock" Johnson), he deciphers it and discovers it gives clues to The Mysterious Island. Sean is convinced that it came from his grandfather.

Eventually, he and Hank set out to find the island. They hire Gabato (Luis Guzman) and his daughter Kailani (Vanessa Hudgens) to fly them out there on a helicopter. Will they find Sean's grandfather (Michael Caine)? And can they get off the island again?

Okay, let's be perfectly honest here. This is a kid's movie. Yes, it has action and fantasy and plenty of comedy. But kids are the target audience. Now, that's definitely not a bad thing in my book. I fully recognize this is not "great" cinema. It's designed to be a fun movie, and I enjoyed it as such.

The story is not terribly original, although I got so caught up in it that I really didn't care. There is plenty of action to keep you engaged even if you know how it is going to end.

And I can't forget the comedy. The packed theater I saw the movie with laughed multiple times, and it sounded to me like the adults were laughing as much as the kids.

The film is filled with special effects as well, and they worked. While I knew what I was seeing couldn't be real, I believed it. While the movie was released in 3D, I didn't see it that way, so I can't comment on how that looked.

And the acting worked, too. It's not outstanding, but it gets the job done without pulling you out of the film. Plus we learn that Dwayne Johnson has a pretty decent singing voice.

There were some flaws to the film. There was a certain level of cheese, especially most of the times the film tried to do anything serious. And on that note, the interpersonal relationships were so predictable it was a bit annoying.

Then there's Luis Guzman. I'm not sure if it was him or how his character was written, but I found him more annoying than funny. I would have preferred the movie without his character.

I realize that I will be in the minority for enjoying Journey 2: The Mysterious Island, but I found it to be entertaining. And since that's all it was really aiming for, I think it succeeded.
Read more
8 people found this helpful
Helpful
Sending feedback...
Thank you for your feedback.
Sorry, we failed to record your vote. Please try again
Report abuse

Robert G. Stover
2.0 out of 5 stars Pathetic Remake.
Reviewed in the United States on 20 February 2020
Verified Purchase
The acting and the plot drags on ( always a potential problem for a remake). Needs a better team of writers. Not recommended if you liked Jumanji. This movie isn't one of the Rocks better movies.
Read more
Helpful
Sending feedback...
Thank you for your feedback.
Sorry, we failed to record your vote. Please try again
Report abuse

C. A. Luster
3.0 out of 5 stars Journey 2: The Mysterious Island
Reviewed in the United States on 11 June 2012
Verified Purchase
Journey to the Center of the Earth  was truly fun and more of a little scary adventure with beautiful graphics. This is a bit less fun with duller graphics, and more of a small kids comedy adventure story. I was really looking forward to this since my wife and I both enjoyed the first one with Brendan Frasier, and I really have enjoyed most the movies Dwayne "The Rock" Johnson has made. My wife and I both thought this was not up to his past movies partly due to the script, and partly due do to the less than enthusiastic acting. Be sure to catch the first one if you haven't, and if you have try the original  Mysterious Island (Widescreen)  for more of a true old style adventure.

Loretta Delgado
5.0 out of 5 stars Aweseom
Reviewed in the United States on 24 June 2017
Verified Purchase
3D on my 65 inch TV was awesome.
Read more
2 people found this helpful
Helpful
Sending feedback...
Thank you for your feedback.
Sorry, we failed to record your vote. Please try again
Report abuse

albows
4.0 out of 5 stars Beautiful blu ray
Reviewed in the United States on 23 January 2020
Verified Purchase
Fun for most ages, I can't believe how many movies Michael Caine is in
Read more
Helpful
Sending feedback...
Thank you for your feedback.
Sorry, we failed to record your vote. Please try again
Report abuse

Mike B.
3.0 out of 5 stars Product came as advertised.
Reviewed in the United States on 20 March 2013
Verified Purchase
My copy of the film was delivered in pretty good condition.

The movie was another story. The writers and the director attempted to combine three classic books into one film (Gulliver's Travel, 20,000 Leagues under the Sea, and Treasure Island). They pitifully created a plot without building character depth or a scientific value. Therefore, the story was a pitiful mishmash of action scenes and poor comedic timing. I was reminded of Spider-Man 3 from this film.
Read more
Helpful
Sending feedback...
Thank you for your feedback.
Sorry, we failed to record your vote. Please try again
Report abuse