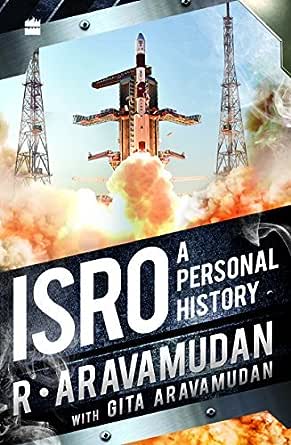 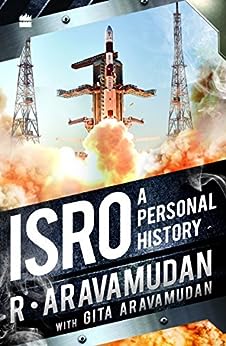 ISRO pioneer R. Aravamudan narrates the gripping story of the people who built India's space research programme and how they did it - from the rocket engineers who laid the foundation to the savvy young engineers who keep Indian spaceships flying today. It is the tale of an Indian organization that defied international bans and embargos, worked with laughably meagre resources, evolved its own technology and grew into a major space power. Today, ISRO creates, builds and launches gigantic rockets which carry the complex spacecraft that form the neural network not just of our own country but those of other countries too. This is a made-in-India story like no other.

Ramabhadran Aravamudan is an award-winning senior scientist who served as the director of the Satish Dhawan Space Centre at Sriharikota and of the ISRO Satellite Centre, Bengaluru. Gita Aravamudan is a veteran journalist and author.

4.6 out of 5 stars
4.6 out of 5
79 customer ratings
How does Amazon calculate star ratings?
Amazon calculates a product's star ratings based on a machine learned model instead of a raw data average. The model takes into account factors including the age of a rating, whether the ratings are from verified purchasers and factors that establish reviewer trustworthiness.

Piyush
4.0 out of 5 stars A must read about the fascinating story of India's space program
Reviewed in India on 11 April 2017
Format: PaperbackVerified Purchase
A very good account of the beginning and growth of ISRO from someone who witnessed events first hand. The book is eminently readable and well paced, highlighting the successes as well as the setbacks faced by ISRO, a story well worth telling. Print and paper quality is also first rate for a book at this price point. There are a few minor shortcomings, largely because the book is a bit too concise:
1. Other than Vikram Sarabhai, the portraits of the other key people behind ISRO are too brief
2. While the book ends with the GSLV and a few pages about the Moon and Mars missions, some more information about the GSLV Mk-III which will make India completely self reliant for satellite launches would have been welcome.
3. The idea of frugal engineering comes up in the book, but it is not explored in detail. While this is evident in the early years of ISRO (rocket cones being pushed along on bicycles et al), it would have been interesting to know how this was maintained in later years when things became institutionalized and much more sophisticated.

All in all, a very good read for anyone interested in the fascinating story behind India's space program.

Dr Santosh Pai. Manipal
5.0 out of 5 stars How much less our people know about ISRO.!!
Reviewed in India on 7 August 2018
Format: PaperbackVerified Purchase
First time the public became aware of the genisis and progress of ISRO. The hsitory is written very lucidly and make an intresting read. Its a tribute all the Scientists and other workers whom we are proud to make our country a space exploring Nation.
Thanks Amazon for the book. It will make all Indians more proud and patriotic.
Read more
6 people found this helpful
Helpful
Comment Report abuse

Ravi Palsokar
5.0 out of 5 stars A story of India on the march
Reviewed in India on 12 May 2017
Format: PaperbackVerified Purchase
This is an excellent book. It tells the story of the Indian space program from its very inception to modern days. The tale is told simply and modestly, which adds to the charm of the book. In a different way it is also a story of how our country has developed over these years. Those of us who have lived through these times will recollect the country's rise from being an underdeveloped country where everything was in short supply to today's vibrant society, epitomised by our space program.
The book has charming vignettes of personalities who are so well known today, particularly our universally beloved late president, Dr. A.P.J. Abdul Kalam. My favourite is the photograph of the author in his vest accompanied by a future president, Kalam, putting something right. From such modest beginnings to the Mars mission, what a journey it has been.
The author and his wife are to be complimented for bringing to us this fascinating story.
It is a must read and if not the whole book, excerpts should form a part of our text books.
Read more
5 people found this helpful
Helpful
Comment Report abuse

Amaruvi Devanathan
5.0 out of 5 stars A veritable read that no Indian should miss.
Reviewed in India on 18 July 2017
Format: PaperbackVerified Purchase
R.Aravamudan, an Engineer with the premier space organization ISRO, writes his experiences in first person singular, in this fascinating book. His history calibrates with the history of ISRO and both grow together and bring laurels to the nation.

The story starts when Aravamudan joins Vikram Sarabhai’s team that plans to launch rockets. What a journey from then on!

Aravamudan trains with NASA for 2 months along with Abdul Kalam, and then heads to the tranquil Thumba in Kerala for initiating the sounding rockets programme. He, along with Kalam and a few others, under monthly supervision by Vikram Sarabhai builds the TERLS in Kerala.

Aravamudan details the different stages of development of ISRO, the nail biting moments during early rocket launches, the leadership of Sarabhai, Satish Dhawan and Kalam and the trials and tribulations of rocket programmes run by a newly independent country.

Aravamudan also details the sabotages staged by trade unions and the delays caused by the violent workers who were affiliated with the unions.

The sections on the workaholic Vikram Sarabhai who worked until he dropped dead, the sequence of events leading up to the SLV launch ( Kalam was responsible for this), the sequential upgrades to the SLV Programme – all these are so tightly narrated without any letup that you feel the tension building up in you when you read them.

What is remarkable is that, page after page, you see the young engineers trying to solve a complex problem with what ever limited resources they had. Without sophisticated technical assistance from abroad, with limited governmental budgetary support, what has been achieved is indeed remarkable.

If you need to know about what the US did to scuttle the cryogenic engine technology development in India and how the engineers from ISRO overcame the hurdles, then this book is for you. You get to know about the contributions of often familiar names : Kasturi Rangan, U.R.Rao, Madhavan Nair, Abdul Kalam, Brahm Prakash, Satish Dhawan and a whole list of luminaries from ISRO.

In 1962 a batch of 5 Indian engineers land in NASA for a 2 month training, return to India and help set up the ISRO and make the organization what it is today. In the same year, a team from Pakistan also visits NASA. Rest is history.

Sudhir
4.0 out of 5 stars Nice book to read
Reviewed in India on 15 April 2017
Format: PaperbackVerified Purchase
ISRO is one of India's most respected govt organisations and this book captures its history and landmark events in a simple manner. A must read for all who would like to know about ISRO and also perhaps for those contemplating career in it. ISRO overcoming American embargo on cryogenic technology shook up developed nations and take notice. Events such as these are mentioned passingly and more details of how the challenges were conquered would have made interesting reading.
Read more
2 people found this helpful
Helpful
Comment Report abuse

r vimal shanmugam
5.0 out of 5 stars INSPIRING BOOK FOR STUDENTS
Reviewed in India on 5 November 2018
Format: PaperbackVerified Purchase
This book is an inspiring work coming in to light the early stages of ISRo and thumba rocket launch center and how the pioneers worked in in down to earth conditions yet with content and happiness of serving the motherland. i appreciate the author mr.Aravamuthan for making an effort to record the events in this for inspiring the younger generations. i have read this book and presented it to my daughter.
Read more
2 people found this helpful
Helpful
Comment Report abuse

V
5.0 out of 5 stars Well written Book.
Reviewed in India on 8 December 2019
Format: PaperbackVerified Purchase
A very well written book. You will feel that as if you were with author at all times, when ISRO was being created and was rising up. Author's personal stories and stories of his colleagues will make you feel as if you are one of them.
The most important thing that I got to learn from this book was that how much we take technology for granted.
Read more

Chris LaHatte
5.0 out of 5 stars Essential reading
Reviewed in the United States on 16 May 2017
Verified Purchase
In the Western world we don't often read about the Indian space programme, and this book fills in a real gap. If anything it understates the tremendous achievements of an almost entirely indigenous development. This book is racy and interesting, and reveals much about the people and politics, and gives a real insight into how they came from bare sandy beaches to successful Mars and Lunar launches
Read more
3 people found this helpful
Helpful
Sending feedback...
Thank you for your feedback.
Sorry, we failed to record your vote. Please try again
Report abuse

DN
5.0 out of 5 stars Great read!
Reviewed in the United States on 18 June 2017
Verified Purchase
Very informative memoir of a little known organization - perhaps indias best kept secret. I wish he had gone into a little more detail into how some of the big challenges were overcome by ISRO. it's a fleeting look at ISRO's growth over the years with some good anecdotes.
Read more
Helpful
Sending feedback...
Thank you for your feedback.
Sorry, we failed to record your vote. Please try again
Report abuse

VIPUL
5.0 out of 5 stars Must read for anyone interested in Indias space history.
Reviewed in the United States on 18 June 2017
Verified Purchase
Thoroughly enjoyed reading this book as was always intrigued by how could ISRO perform exceptionally well when several other Givt organizations fail ti achieve their objectives.

Highly recommend to be read by school and college going students and also someone wishing ti join ISRO to know insights of how this great organization has reached so far on shoulders of greats like Arvamudam sir
Read more
Helpful
Sending feedback...
Thank you for your feedback.
Sorry, we failed to record your vote. Please try again
Report abuse