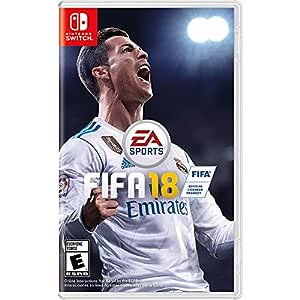 by Electronic Arts
Platform : Nintendo Switch |
Rated: Ages 3 and Over
4.1 out of 5 stars 45 ratings
Returns Policy
Currently unavailable.
We don't know when or if this item will be back in stock.

Your FIFA, Your Way: Brand-new ways to play single and multiplayer on the most social FIFA experience ever. With a variety of controller and display configurations available, as well as split Joy-Con support, FIFA 18 on the Nintendo Switch offers a responsive and engaging gaming experience – no matter how you play.

Your Favorite FIFA Modes, for Nintendo Switch: With FIFA Ultimate Team, Career Mode and Switch-tailored Kick-off and Local Seasons, FIFA 18 on Nintendo Switch is the deepest portable FIFA ever.

Immersive Presentation and Gameplay: With advanced rendering technology, FIFA 18 on Nintendo Switch delivers an unparalleled experience. The product boasts a full 1080p on TV and 720p on handheld, delivering authentic football aospheres, no matter where you play. Experience brand-new pitch environments, unique physically based rendering for all characters and new gameplay mechanics.

Your FIFA, Your Way

Console Configurations: Experience FIFA wherever, whenever and however you want. Connect to your television and play, Single or Multiplayer, Offline or Online* or take the same modes on-the-go. Play with the console:

Split Joy-Con Support: A new FIFA control scheme, built exclusively for Nintendo Switch, enables you to compete with your friends anytime and anywhere. Without any additional hardware, players can separate the Joy-Con controllers and enjoy multiplayer game modes at home or on the go. Joy-Con Support on FIFA 18 includes:

• Switch Kick Off: Pick-up and play instantly in single-player or local multiplayer with a friend.

• Local Seasons: Match-up with a friend, play a five-match season and keep track of your overall win/loss record. Local Seasons are played across two Nintendo Switch consoles allowing up to 4 players.

• Career Mode: Take control of a club as a player or manager and steer your club to victory over multiple seasons.

• Women’s International Cup: Play as the world’s best women’s teams and compete for your country in a knockout style tournament.

• Online Seasons: Compete against other Nintendo Switch players online and track your divisional progress as you push to get promoted and ultimately win the championship.

FIFA Ultimate Team: The most popular mode in EA SPORTS FIFA is available on Nintendo Switch, allowing you to build and manage your own squad from thousands of authentic players.

• Depth in Modes: The most exciting ways to play FUT including: Single Player and Online versions of Seasons, Tournaments and Draft while also featuring Squad Building Challenges and Team of The Week Challenges.

• FUT Icons: The best of the best are coming to FIFA 18. Play with most iconic legends of football including Ronaldo Nazário and more to be revealed.

• Transfer Market: Engage in a global transfer system, buying and selling players to build your team and track down the players you want for your squad.

• Physically Based Player Rendering (PBR): Experience authentic player renders, built with PBR shading to make characters more life-like than ever before on a portable console.

Gameplay: New gameplay mechanics allow you to take total control on the pitch.

• Complete Control Crossing: All-new crossing controls provide the player with a variety of options to put the ball into the box, creating dynamic attacking chances.

• Responsive Play: Feel in control of possession in attack, with creative skills, responsive touches and a dynamic control dribble mechanic. In addition, authentic animations for volleys, shooting and tackling offer a fluid and rewarding gameplay experience.

• Trainer Overlays: Intelligent overlays help you learn gameplay mechanics. The trainer adapts to how your style of play, giving an edge to players of all skill levels.

The Journey: Hunter Returns - Available on PS4, Xbox One and PC

The World's Game takes you on a global journey as Alex Hunter returns along a star-studded cast of characters and top football talent, like Ronaldo and other European stars. After a breathtaking first season in the Premier League, Hunter is gaining recognition from top clubs the world over and he is willing to explore any options coming his way. He feels ready to take the next step, his future is bright, and the world is talking about Hunter. But life in football isn’t always fair.

Key Features - Available on PS4, Xbox One and PC

4.1 out of 5 stars
4.1 out of 5
45 customer ratings
How does Amazon calculate star ratings?
Amazon calculates a product's star ratings based on a machine learned model instead of a raw data average. The model takes into account factors including the age of a rating, whether the ratings are from verified purchasers and factors that establish reviewer trustworthiness.

Rajveer
5.0 out of 5 stars FIFA on Switch for the franchise lovers!
Reviewed in India on 8 February 2018
Platform for Display: Nintendo SwitchEdition: Standard EditionVerified Purchase
Firstly, the game came in its original packaging. Was a little skeptical of it while making the purchase.

Honestly, I'm playing FIFA after over a decade! The controls on the Switch are fairly easy to learn. There's a tutorial area which explains the various controls very simply and enables you to make small attempts at trying them before you get into the actual action.

Its a fun game to keep if you have friends who are FIFA enthusiasts coming over.

Sarthak Garg
2.0 out of 5 stars Not ‘Surprisingly Good’
Reviewed in India on 7 October 2017
Platform for Display: Nintendo SwitchEdition: Standard EditionVerified Purchase
Bought it for The Journey so that I could play that’s without a Console. It does not have Journey mode so if you were expecting that Too Bad.

The Product is not So good too
I realise that for a Smaller Console that’s the best I could get but it’s not really worth it.

Amogh S.
4.0 out of 5 stars Just for portability and coop
Reviewed in India on 16 November 2017
Platform for Display: Nintendo SwitchEdition: Standard EditionVerified Purchase
I bought it on the switch for the purpose of portability and it serves just that. It feels like an older version of the game with an updated roster. Visuals are good not on par with the ps4 version but i never expected them to be anyway. Gameplay wise it feels like Fifa 17. What sets it apart is the ability to play local coop by just handing over a controller to friend anytime anywhere. Deducted 1 star because most of the gameplay features present in the ps4 versions are missing from the Switch one. I do own both the versions.
Read more
2 people found this helpful
Helpful
Comment Report abuse

Joefooty
5.0 out of 5 stars Awesome game but not worth the price
Reviewed in India on 17 October 2017
Platform for Display: Nintendo SwitchEdition: Standard EditionVerified Purchase
Game is decent, ofcourse not as good as ps4 and xbox one edition, but I got a switch for cheap and I mostly play only fifa, could have been better but hey u get to take fifa wherever u want, except on Mumbai trains, cause they crowded as hell.
Read more
One person found this helpful
Helpful
Comment Report abuse

Anant Varman
5.0 out of 5 stars Triumph for Portable sports games
Reviewed in India on 7 October 2017
Platform for Display: Nintendo SwitchEdition: Standard EditionVerified Purchase
Obviously no match for the Ps4 and Xbox versions but brilliant in itself. Given the fact that i can take career mode and Ultimate team anywhere i want is extraordinary. Only let down was the missing rolling subs feature and the new negotiation system in career mode
Read more
One person found this helpful
Helpful
Comment Report abuse

Siddharth M
5.0 out of 5 stars Addictive game on Switch!!!
Reviewed in India on 11 October 2019
Platform for Display: Nintendo SwitchEdition: Standard EditionVerified Purchase
Thanks to the seller 'MicroMini' for selling it in rs899, cheapest and addictive soccer game.
Read more
Helpful
Comment Report abuse

Kunwarjot S.
4.0 out of 5 stars Great game!
Reviewed in India on 27 February 2018
Platform for Display: Nintendo SwitchEdition: Standard EditionVerified Purchase
As a game for hand-held console GREAT! As a game for a docked console not bad either , immersive experience, one will hardly miss the exceedingly well FIFA on PS4 or XBOX ONE.
Read more
One person found this helpful
Helpful
Comment Report abuse
See all reviews from India

Mrs S Beasley
5.0 out of 5 stars Great
Reviewed in the United Kingdom on 10 June 2018
Platform for Display: Nintendo SwitchEdition: Standard EditionVerified Purchase
My husband loves this! Plays it for hours now
Read more
Helpful
Sending feedback...
Thank you for your feedback.
Sorry, we failed to record your vote. Please try again
Report abuse