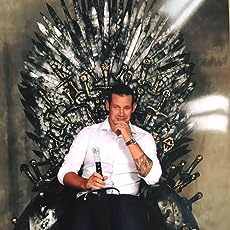 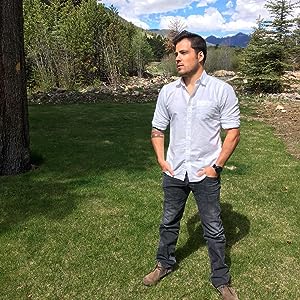 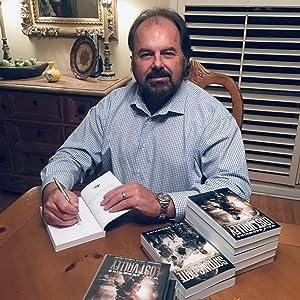 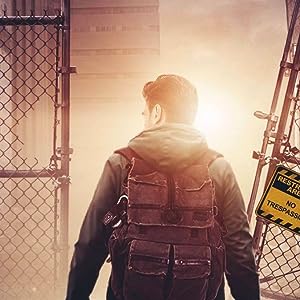 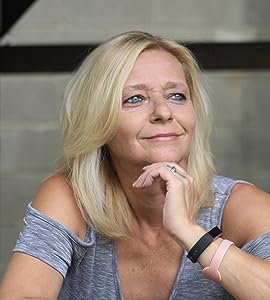 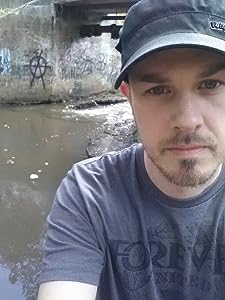 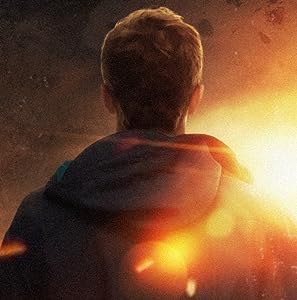 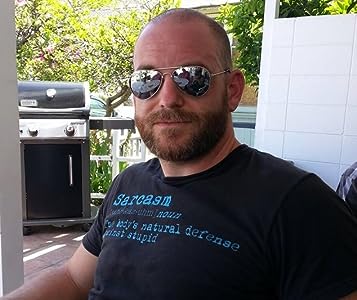 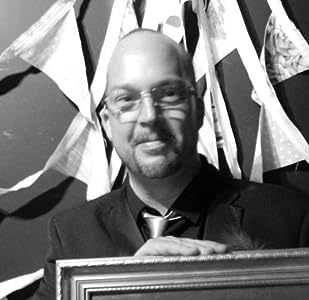 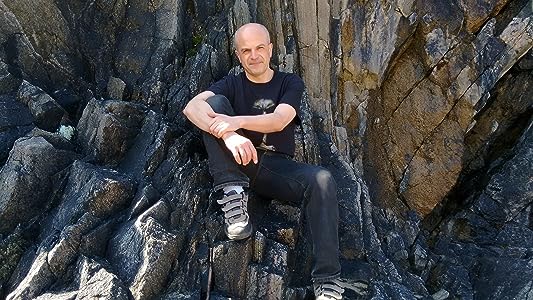 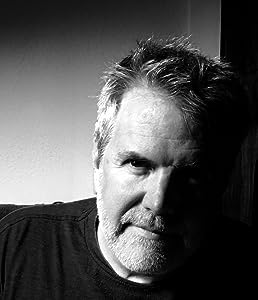 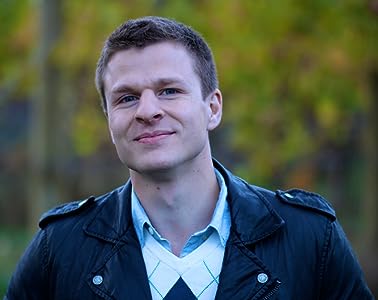 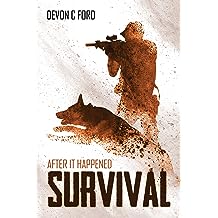 Survival: After It Happened Book 1 10 Apr, 2017
by Devon C. Ford
( 617 )
₹ 221.00
Set in the UK in the immediate aftermath of a mysterious illness which swept the country and left millions dead, the series follows the trials facing a reluctant hero, Dan, and the group he forms around him. They must battle the elements, find sufficient supplies and equipment to survive, and protect themselves against the most destructive force on the planet: other people.

Banding together those he found along the way, he has to fight to keep them safe.

To keep them alive. 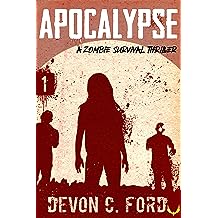 The only thing worse than death, is living in hell on Earth.


Disorder and chaos ravage London when thousands are contaminated by the accidental discharge of an experimental bio-weapon. The disease robs its hosts of rational thought, giving them a singular desire—find more living flesh to infect.

Cut off from information and senior leadership, one squadron of soldiers under the command of their senior NCO, Sergeant Major Johnson finds itself forced to operate independently until the remnants of military and government command re-establish themselves safely at sea in the English Channel.

The infected, however, have a different agenda. They gather into massive hordes, sweeping the countryside, and leaving nothing alive in their wake.

Don’t miss this heart-stopping intro to a Zombie Thriller Series about survival against all odds! You’ve never experienced the undead like this before. 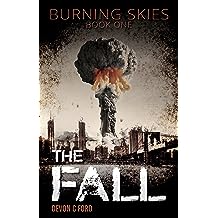 Cal’s ‘honeymoon’ didn’t start off quite how he’d planned. For starters, he was heading somewhere he didn’t actually want to go. And secondly, he was going alone and unmarried. He had no idea that his first visit to New York City would also land him in the middle of a domestic terror attack, forcing him to flee Manhattan in a desperate bid to survive.

This was no ordinary terror attack.

The Movement, in a misguided attempt to seize political control of the USA, unwittingly invited the destruction of their homeland, and as the bombs start to fall, the shock and loss of life reverberates around the world.

Cal, along with a small group he met in NYC, desperately flees inland away from the targeted coastal cities, but chaos follows them around every corner. 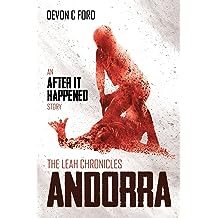 Life at the fortified town of Sanctuary is calm. The people, with their fearless leader at the helm, have created a haven where they can live out their lives in peace and safety.

But it hasn’t always been this way. There were battles and losses along the way, and victory usually came at a price.

With the younger generation coming into their own, it’s time for Leah to pass on all she has learnt over the years. Time to tell the stories of how the world became the way it is…starting with the highwaymen of Andorra. 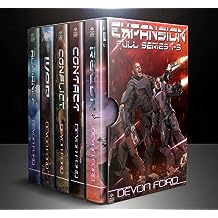 Years after clean energy ended the world’s reliance on fossil fuels, a lull of peace encompasses all of humanity.

Lieutenant Commander Kyle Torres comes face to face with old friends, as he’s thrown into an assignment that could change everything: a reconnaissance mission with huge implications for humanity and science alike.

The recon ship, the Ichi, made contact with alien beings far from home, making new allies and new enemies.

Finding themselves in the middle of an alien conflict, inadvertently picking sides in exchange for advanced technology, the true cost of war is brought home to them in stark reality and loss of life.

Leaving Centauri for Earth, and unaware of the scale of power and technology they will need to secure the system and all the resources it holds, Admiral Dassiova’s fleet is in deeper water than they can imagine.

3 CONFLICT:
Battles have been lost. Enemies stranded. The Conflict continues

Re-armed, re-fitted and hopeful that they pack enough punch to take on the superior foe, the human fleet heads back to pit their new ships against the Va’alen swarm.

As they begin building a space station as a foothold in the region, their recon ship, the Ichi, is sent ahead to explore, when a worrying discovery leaves Commander Brandt and her team stranded and cut off on the surface of a strange and hostile moon.

Fighting against the clock, they face a danger the fleet might not survive, and treachery threatens everything they’ve built.

4 WAR:
The universe has expanded dangerously beyond belief

The fracturing of order back home sends Earth into turmoil, the tension affecting both near and far solar systems.

Commander Kyle Torres, after the shocking discovery of the true nature of the Va'alen, is tasked with the difficult job of negotiating with the Kuldar.

The rest of the team who found themselves stranded on the forest moon are drawn back into a fight with their newest enemy, but they learn that not all of their enemies are alien.

When the dust settles, the mission becomes clear. They are at War.

5 ALLIANCE:
The future of the galaxy will be shaped by one battle. An alliance is at the crux of Earth’s success

Captain Kyle Torres, now back in command of the Ichi, hand-picks his crew for their most dangerous mission yet.
Their journey takes them to never before explored sectors of space, and the secrets they uncover lead to an alliance with an unexpected ally.

A desperate assault uncovers truths humanity never expected in the bid to bring peace and prosperity to humanity, and to draw territory lines across space to last forever.

Get the epic military science fiction Expansion series today, with War, from the best-selling author of the hit Post-Apocalyptic series, After It Happened 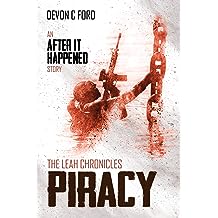 Eight years after the world changed forever, Sanctuary and her surrounding settlements had settled into their new way of life. And with the events in Andorra a distant memory, they were safe…or at least they thought they were.

As Leah recounts their highs and lows, the memories of that fateful day come flooding back. The day violence visited them from the sea in a way they could never have anticipated. The way in which their whole way of life was threatened, and she was forced to battle more than just the invaders to keep her people, her family and herself safe.

The day Leah discovered something that would change her life forever. 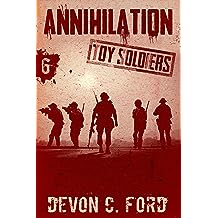 A lull in the onslaught of infected breeds a false sense of security for Johnson and his expanded group. Once again, events unfolding far beyond their knowledge conspire to bring a new type of terror to the survivors.

Others, displaced from what had been their place of safety, struggle to survive against age-old enemies: cold and hunger. In a bold move, they break out, only to make unexpected discoveries which could spell a chance for them to survive.

In a bid to undo all progress, the untested serum is deployed on a massive scale which tips the scales steeply against humanity’s chances to win. To live. To remain the dominant species on Earth.

Fleeing the seemingly unstoppable enemy, they pin their hopes on a final attempt for freedom, but that means they must turn their backs on their home forever. 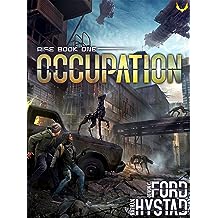 Alec works in the Detroit Overseer-factories, building a mysterious alien device. When three strangers appear, he's provided an opportunity to escape after years of servitude.

Cole, a Freeborn loner, encounters Lina after her village is destroyed by the alien Occupation. Together, they make the arduous journey to a fabled safe-zone, trying to stay one step ahead of the enemy drones on their trail.

Dex is a Hunter, working for the Occupation to track down escaped factory slaves, or Roamers, at all costs. But his latest hunt uncovers a massive secret and threatens his loyalty to the Overseers.

All their fates are bound. For the first time in decades, a secret enclave of alien resistance fighters known as the Reclaimers prepare to make their move.

Experience the unforgettable first novel in a post-apocalyptic alien invasion series that will leave you breathless. It's perfect for fans of Fallen Skies, Colony, and District 9.

Also available on Audible, narrated by the award-winning Ray Porter (Bobiverse, The Fold). 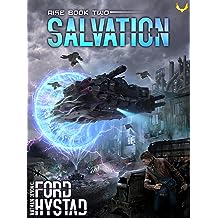 With the newly received schematics of the Gateway from Detroit, Tom and Alec head to the west coast to recruit more manpower, but find that not everyone is willing to rise against the Overseers.

On Tom’s orders, Cole travels to Chicago to uncover a hidden enclave of Roamers. Meanwhile, Lina must convince pockets of Freeborn to join the Reclaimer's cause.

Dex is forced to return to the Occupation and lie about his recent whereabouts. He sets off on a covert task that’s pertinent to the Reclaimer’s success.

Salvation is the second book in the sweeping post-invasion series, Rise, by Devon C. Ford, the author of After It Happened, and Nathan Hystad, the author of The Survivors. 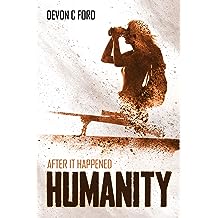 Humanity: After it Happened Book 2 10 Apr, 2017
by Devon C. Ford
( 239 )
₹ 302.00
Set in the UK in the immediate aftermath of a mysterious illness which swept the country and left millions dead, the series follows the trials facing a reluctant hero, Dan, and the group he forms around him. They must battle the elements, find sufficient supplies and equipment to survive, and protect themselves against the most destructive force on the planet: other people.

The survivors have established a home, but they still have to face the brutality of human nature.

Not only do they have to survive, they must keep their humanity. 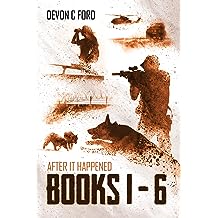 After it Happened Boxset: 1-6 Omnibus Edition 18 Jul, 2019
by Devon C. Ford
( 10 )
₹ 449.00
After it Happened is a global phenomenon best-selling series, and for a limited time this boxset brings all 6 titles together to allow you to catch up on the whole series.

Synopsis:
Set in the UK in the immediate aftermath of a mysterious illness which swept the country and left millions dead, After it Happened follows the trials of a reluctant hero, Dan, and the group formed around him, including the fearless Leah. They must battle the elements, find sufficient supplies and equipment to survive, and protect themselves against the most destructive force on the planet: other people. 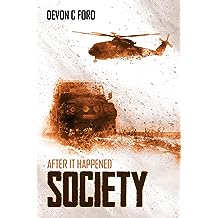 Society: After it Happened Book 3 10 Apr, 2017
by Devon C. Ford
( 212 )
₹ 302.00
Set in the UK in the immediate aftermath of a mysterious illness which swept the country and left millions dead, the series follows the trials facing a reluctant hero, Dan, and the group he forms around him. They must battle the elements, find sufficient supplies and equipment to survive, and protect themselves against the most destructive force on the planet: other people.

The survivors have prospered, but their home is an enticing prospect for others to take. Besieged, they must respond with a savagery to dissuade further attempts.

Is this the end of society?