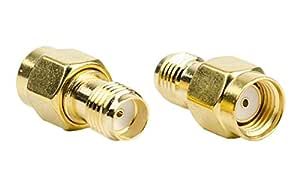 4.7 out of 5 stars 245 ratings
10 Days Replacement
Warranty Policy
Warranty Policy
No Warranty
Currently unavailable.
We don't know when or if this item will be back in stock.

Technical Details
Additional Information
Warranty & Support
Warranty Details: No Warranty
Feedback
Would you like to tell us about a lower price?
If you are a seller for this product, would you like to suggest updates through seller support?
Customer Questions & Answers
See questions and answers

4.7 out of 5 stars
4.7 out of 5
245 customer ratings
How does Amazon calculate star ratings?
Amazon calculates a product's star ratings based on a machine learned model instead of a raw data average. The model takes into account factors including the age of a rating, whether the ratings are from verified purchasers and factors that establish reviewer trustworthiness.

R. Thompson
4.0 out of 5 stars Works well
Reviewed in the United States on 22 May 2018
Verified Purchase
There is not much to say about these as they are such a simple product.
I needed these as I ordered a pair of ev100 goggles and I could have sworn it said that it was an sma connector so I bought sma antennas then when I got it they were rp-sma so hence the need for the adapters.

I received them quickly
They came screwed together in a bag in a box so nothing smacking against each other or anything so that was good.
They work
They don't feel cheap
They are pretty much as small as they could get them, maybe could have removed 3mm in the middle but that is just nit picking and they may need that for some weird sma connector that may be out there, who knows.
I already have them mounted and they are working great.

DesertFlyer
5.0 out of 5 stars Excellent adapter for a QD BNC-SMA Radio Array!!!
Reviewed in the United States on 7 November 2019
Verified Purchase
As a noob to Ham, an Elmer had suggested an adapter system like these for multiple access points for HTs that deploy SMA thread connectors to various upgrade or mobile whips, fixed, j pole, antenna, etc.
The 58 co ax I use for roof top J pole, has a BNC F and a few of some very nice whips did too. Using a pig tail just seemed too flimsy or going 239 to SMA on a regular basis seems like the SMA would wear out rather quickly or fail at some point. BNC is a great solution. I just had a heck of a time fumbling through the often opposite described male or female translations for what I needed.
THIS is the one!! Finally! If this issue with fit, and length, threading etc is a concern, these FIT. Well made, no issues. Definitely recommend.
I plan to seat these in all my HTs that use SMA connects and buy or adapt the various antenna that match up. SO much easier and I haven't noticed any loss but again, I'm not a seasoned radio Ham and have a lot to learn in this very cool old school hobby/league of good guys. I have had a lot of prior experience with old RC rotary CP build it yourself birds, so some of the subjects are meshing up nicely. This is truly a DIY type club hobby and wow was it difficult at first. Still is. All the different networks that are or aren't compatible with this one or that one, digital and analog switching, repeaters, programming cables with chips, whether it's OS or PC only compatible, CHIRP or not, using your own array of .csv files, good grief I have come close to giving up many times. At present, I am waiting until the next test date to take both at the same time and have just been a listener for the past 6 months. That is the number one reason I decided to stick with the Ham endeavor. It speaks volumes that a community of helpful, skilled, wise folk with many great QSOs exist, and actually speak respectfully with each other. It's much more interesting to listen to various local and national groups on the uhf bands than the junk shows on the all new and even more idiotic 'idiot box'. Yeah I guess I'm an old school type at heart in many aspects of life. Military and LE vets, often aviation and engineering backgrounds definitely piqued my interest in becoming a licensed Ham as they are most of whom I've always circled in solid brotherhood. It's a neat hobby, and a challenging one technically wise. As a former RC mentor said when we were flying 2-3-6 axis collective pitch money pit flying lawn mowers, "if it was easy, it'd get boring very quickly". When fly by launch and return button quads overtook custom build high performance or scale flyers, meant the shelved array of some very cool very precision instruments and faded kinship with some good friends, at the forefront of old school innovation. I don't see Ham going 'plug and play' any time soon. So onward and a new journey begins. 73s
Read more
Helpful
Sending feedback...
Thank you for your feedback.
Sorry, we failed to record your vote. Please try again
Report abuse

David Black
2.0 out of 5 stars They do work, but see below
Reviewed in the United States on 25 January 2020
Verified Purchase
What they don't do well is if you are using these to temporarily make/unmake a connection, you will need to carry around a pair of needle nose pliers to stop the inter section from just spinning, because there is no nut on the inner section to grip for disassembly. The same goes for if you are using these to connect antennas and you want the antenna to stay in one position, the smaller section will allow the larger to turn and your antenna will flop over.
Read more
One person found this helpful
Helpful
Sending feedback...
Thank you for your feedback.
Sorry, we failed to record your vote. Please try again
Report abuse

Gregory Downs
3.0 out of 5 stars Look carefully
Reviewed in the United States on 1 December 2018
Verified Purchase
Confusing description. Thought they were male to female connector. The threads are, but the pins are not. No male pin. Not sure why. Unusable for my antenna connection.
Read more
One person found this helpful
Helpful
Sending feedback...
Thank you for your feedback.
Sorry, we failed to record your vote. Please try again
Report abuse

A. Pinkley
2.0 out of 5 stars 50% not functional
Reviewed in the United States on 30 May 2018
Verified Purchase
One of the two I received has a mishaped center pin.
Read more

Jason
5.0 out of 5 stars Good
Reviewed in the United States on 10 January 2019
Verified Purchase
Worked for my application. Used for Wi-Fi antenna extension.
Read more
2 people found this helpful
Helpful
Sending feedback...
Thank you for your feedback.
Sorry, we failed to record your vote. Please try again
Report abuse

U2
5.0 out of 5 stars Excellent
Reviewed in the United States on 31 July 2019
Verified Purchase
Needed these adapters for WiFi cameras and panel antennas. Adapters worked perfectly and are well made. Very nice.
Read more
Helpful
Sending feedback...
Thank you for your feedback.
Sorry, we failed to record your vote. Please try again
Report abuse
Load more international reviews

Josh J. Moss
5.0 out of 5 stars Worked, good to have.
Reviewed in the United States on 31 December 2015
Verified Purchase
These are what they say they are. If you are setting up new FPV equipment, then it may be a good call to just have these adapter around just in the event you need them when switching around different antennas. only thing that can be trouble is they can lock really tightly to you antenna so i sometime have to use pliers.
Read more
Helpful
Sending feedback...
Thank you for your feedback.
Sorry, we failed to record your vote. Please try again
Report abuse

Daniel C.
5.0 out of 5 stars They work
Reviewed in the United States on 9 August 2018
Verified Purchase
Bought these to fit an antenna with a male end to convert it to a female end. They do the job.
Read more

One person found this helpful
Helpful
Sending feedback...
Thank you for your feedback.
Sorry, we failed to record your vote. Please try again
Report abuse

TJW
5.0 out of 5 stars Exactly what I needed
Reviewed in the United States on 12 August 2019
Verified Purchase
I ordered an antenna but got the wrong connection. Ordered these and everything works exactly as needed
Read more
Helpful
Sending feedback...
Thank you for your feedback.
Sorry, we failed to record your vote. Please try again
Report abuse

Kingdavid3277
5.0 out of 5 stars Perfect wit no flaws 💪💪💯
Reviewed in the United States on 28 March 2020
Verified Purchase
Perfect wit no flaws...worth the money 💪💪💯
Read more
Helpful
Sending feedback...
Thank you for your feedback.
Sorry, we failed to record your vote. Please try again
Report abuse