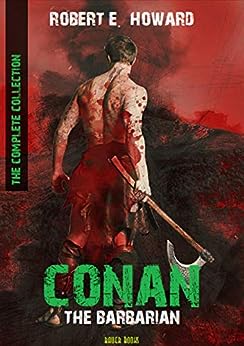 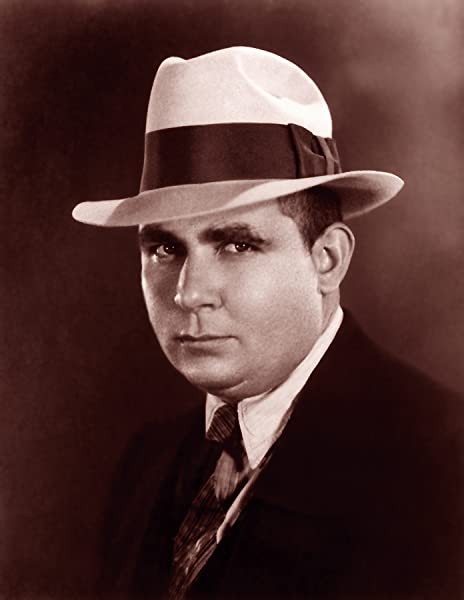 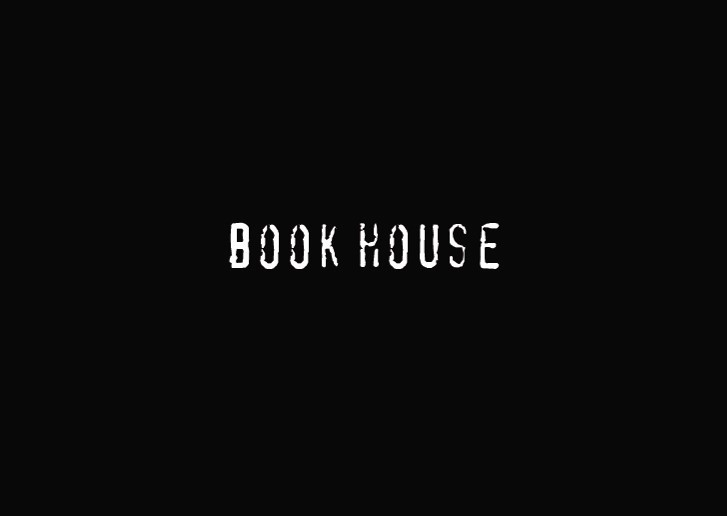 by Robert E. Howard (Author) Format: Kindle Edition
See all formats and editions
Sorry, there was a problem loading this page. Try again.
Conan the Barbarian (also known as Conan the Cimmerian) is a fictional sword and sorcery hero who originated in pulp magazines and has since been adapted to books, comics, several films (including Conan the Barbarian and Conan the Destroyer), television programs (animated and live-action), video games, role-playing games, and other media. The character was created by the writer Robert E. Howard in 1932 for a series of fantasy stories published in Weird Tales magazine.

This book contains the complete Conan stories in the chronological order of their original publication.
Read more
Previous page
Next page

The energy of the writing practically thrums off the page and often the sense of tension and unease invoked is genuinely unsettling. Read it, then use the weighty tome to smite your enemies, drive them before you and hear the lamentation of their women! (STARBURST) --This text refers to an alternate kindle_edition edition.

A sumptuous hardback to celebrate the 100th anniversary of the birth of Robert E. Howard, one of the true Masters of Fantasy --This text refers to an alternate kindle_edition edition.

Robert Erwin Howard was born and raised in rural Texas, the son of a pioneer physician. He began writing professionally at the age of fifteen and until his tragic death at the age of thirty turned out dozens of tales of heroic and supernatural fantasy that won him a huge audience across the world and influenced a whole generation of writers, from Robert Jordan to Raymond E. Feist. --This text refers to an alternate kindle_edition edition.
Read more

4.5 out of 5 stars
4.5 out of 5
1,710 global ratings
How are ratings calculated?
To calculate the overall star rating and percentage breakdown by star, we don’t use a simple average. Instead, our system considers things like how recent a review is and if the reviewer bought the item on Amazon. It also analyses reviews to verify trustworthiness.
Top reviews

Abhijit
5.0 out of 5 stars Superb
Reviewed in India on 15 May 2017
Verified Purchase
Great imagination. Took 4 months to complete. Enjoyed every page. Hope you enjoy too !!!!!!! Good bye see you ☺
Read more
One person found this helpful
Helpful
Report abuse

Amazon Customer
1.0 out of 5 stars Lousy Kindle edition of a great book
Reviewed in India on 20 March 2017
Verified Purchase
This thing has typos, missing paragraphs, spacing issues, and a whole mess of mistakes. Not worth spending money on.
Read more
2 people found this helpful
Helpful
Report abuse
See all reviews

Eric Faragher
4.0 out of 5 stars The Forgotten Temple of Amazonia In the Black Jungle of Ebuccanalia
Reviewed in the United Kingdom on 31 December 2020
Verified Purchase
Conan stalked up to the Kindle with the soft tread of a hunting panther. In the hands of an ordinary, civilised man, the device would have been of a comfortable size, but in the massive fists of the Cimmerian it almost disappeared.

"Crom!" he grunted as he accidently flicked the "On" switch with a fingernail like a spade. His square cut black hair bristled with superstitious dread as the screen revealed unfamiliar symbols. However, the barbarian had picked up a smattering of all tongues of all lands in his many years of roaming and was able to read his own name there.

Suddenly his eyes became slits and burned with elemental rage. He snarled and whirled about, suspicious of a trick, his broadsword sweeping the area about him in a great arc of swift death...

But there was no wizard or assassin creeping up behind him.

The fire in his eyes died down as he relaxed once more and turned his attention back to the magical device and began to read.

"Crom," he exclaimed after a moment, "but surely this is a scan with some obvious mistakes." With a snarl of unthinking rage he threw the Kindle from him. It would have survived the throw of any ordinary man, but not the steely thews of that mighty frame powered by the unthinking instinct that had saved Conan a thousand times. It shattered against a wall of lapis lazuli, falling into a thousand pieces on the marble floor of the ruined and forgotten jungle temple....

Actually, the mistakes were not so many as to worry a civilised reader and the purchase of so much for so little treasure need not have awakened the wrath of the wolfish warrior. For, although the text was undoubtedly scanned, yet it had been proof read and mistakes were not so many or so great as to arouse much anger.
Read more
18 people found this helpful
Report abuse

Ali M
2.0 out of 5 stars Beautifl edition, but NOT complete
Reviewed in the United Kingdom on 2 January 2021
Verified Purchase
This is a gorgeous book, lovingly put together, but I was a bit shocked to open it and look a the contents. Is that all the stories in it?, I thought.

Yes, it *technically* has all the Howard tales but it doesn't have any of the ones he wrote in collaboration with other authors so it is pretty incomplete and whole sections of Conan's tale are untold here. For example, it is missing: The Thing in the Crypt, The Hall of the Dead, The Hand of Nergal, The City of Skulls, The Curse of the Monolith, The Boodstained God, Lair of the Ice Worm, The Castle of Terror, etc, etc....

I am finding this a less *complete* edition than a 25p paperback 1989 edition I picked up in a charity shop bin.
Read more
19 people found this helpful
Report abuse

Chris-E-Gray
3.0 out of 5 stars Great Novels, Poor Formatting.
Reviewed in the United Kingdom on 30 June 2020
Verified Purchase
As a series of novels the Conan books are great. They lay the ground work for so much of modern fantasy that I'd say they're a must read for any Roleplayer, wargamer or general fanatasy lover.

That being said, there are a few poor points with this partucular edition that I want to mention;
-The novels in this collection are in publish order, rather than in Conans chronological order. Meaning the open the book to Conan as a legendary king and at some point later on get his 'start' and the growth of the character. This could very easy throw off a new reader to the series.
-The book is poorly formatted for kindle. There are missing sentences at the start of chapters, random symbols inplace of some letters, and general overall poor formatting thoughout.

Aside from these issues, some people may find the language used in the novels a bit hard to stand. Woman and anyone none White are described in very caricatured ways that reflect the author as a product of his time. If you're uncomfortable reading excessive young female nudity and Black men being described as naked savages, I'd advise against reading this series in general.

Overall, I'd recommend this book as a cheap way of picking up the Conan stories. But if you can afford it, I'd advise you lool elseware.
Read more
13 people found this helpful
Report abuse

Cari Hislop
5.0 out of 5 stars By Crom, this Conan compendium is awesome!
Reviewed in the United Kingdom on 16 November 2016
Verified Purchase
I'm not even half way through the compendium and I'm hooked. The descriptive power of the author is awesome! He sucks me into the story and when disturbed from the tale it's that groggy...Reality? What? Ugh!... I've been reading it as bed time stories. The individual books are fairly short and each story is complete in itself. I grew up reading my older brother's Conan the Barbarian comics (and admiring the Fantasy artists who painted the covers), but these stories (the originals) blow the comics out of the water. As one of the other reviewer noted, the author writes realistic battles. Iron Age history in fiction form...you can smell the blood, hear the screams, feel evil leer at whoever is in its sights! Conan as a character is so much more enchanting than I would have ever guessed. He's hard, considering he was born on a battle field that would make sense, but he has his own personal code of honour and he's not unkind or without a dry humour. I can easily believe that if I could go back in time...I could meet men like Conan - men who survive their day job as Mercenary/thief/whatever it takes to survive and rise above their expectation to something great.
Read more
25 people found this helpful
Report abuse

Miss Sharon P Halsey
5.0 out of 5 stars What's important to know.
Reviewed in the United Kingdom on 21 April 2021
Verified Purchase
I have always been a Conan fan with Arnold Schwartinegger as Conan he is the perfect Conan and for me always will I've seen the two films he made many times and I discovered on Amazon when searching that there was chronicles of Conan the Barbarian and when I found this Complete Chronicles of Kindle I wanted to download it and read it on the Kindle tablet as in my house I have no more room for real books and I don't sell them when I have read them as I keep them to go back to later. Reading the chronicles of Conan has helped me through this past year of lockdown's etc and I sometimes don't want to get back to real life as I read his many adventures. I love it and thanks for it.
Read more
4 people found this helpful
Report abuse
See all reviews
Report an issue
Does this item contain inappropriate content?
Report
Do you believe that this item violates a copyright?
Report
Does this item contain quality or formatting issues?
Report