Skip to main content
Subtotal ₹
Cart
View your cart
To add this eBook, remove any 1 eBook from your cart or buy the 25 eBooks present in the eBook cart
Review items in your cart
There was a problem adding this eBook to the cart
Deliver to your Kindle Library 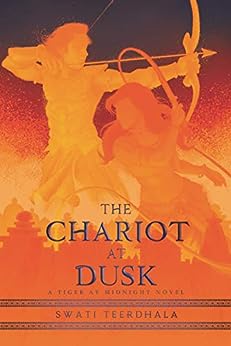 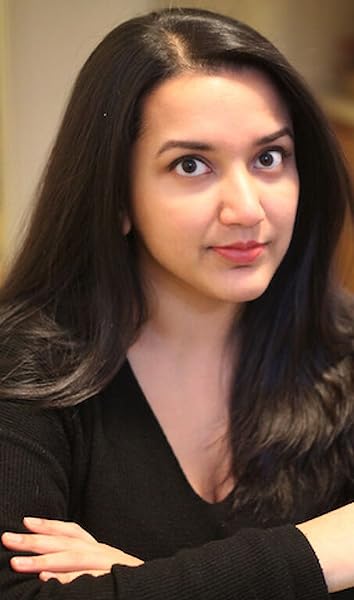 The Chariot at Dusk (Tiger at Midnight Book 3) Kindle Edition

by Swati Teerdhala (Author) Format: Kindle Edition
Book 3 of 3: The Tiger at Midnight
See all formats and editions
Sorry, there was a problem loading this page. Try again.

The sweeping, dramatic finale of Swati Teerdhala’s South India-inspired fantasy trilogy rounds out the epic, romantic tale of an assassin and a soldier fighting to save their country and their people. Perfect for fans of Sabaa Tahir and Victoria Aveyard.

A queen at last. An empty palace. A kingdom to save.

Esha is reeling from Kunal’s betrayal, but she has a kingdom to rule from behind a thin smokescreen—pretending to be Princess Reha while she sends her most trusted soldiers to collect Reha and Kunal by any means necessary. Traitors, after all, must be punished.

But the Yavar are attacking from every front—tracking down Kunal and Reha in the remote mountains, kidnapping Harun—in search of legendary artifacts that will give them the power to break the precarious janma bond and release the destructive magic back into the lands.

Now that the race is on to find the missing artifacts, Esha must put aside her rage and work with Kunal again—but can she find the strength to forgive him, or will the Viper have her revenge at any cost?

Praise for The Archer at Dawn: “Teerdhala’s Hindu-mythology–inspired world is richly drawn, and the book’s fight scenes are detailed and action packed. A South Asian–inspired fantasy with a strong female lead.” -- Kirkus Reviews

"If you crave Indian-inspired stories or yearn for unconventional South Asian protagonists, this is the book for you. Teerdhala’s ability to control pacing is exceptional, and her fantastic world-building coupled with her page-turning tension will keep you captivated." -- Brown Girl Magazine

Praise for The Tiger at Midnight: “Thrilling, entertaining, and beautifully written, this is one adventure YA fans won’t want to miss.”
-- Buzzfeed

“Teerdhala’s debut, immersed in Indian fantasy, features two compelling protagonists who must question their loyalties and decide what they’re willing to sacrifice for the chance at a new future. Fast-paced action and a budding romance between emotionally layered characters make this a promising start to a gripping new series.”
-- ALA Booklist

“[A] lush blend of folklore, fantasy, and romance.” -- Kirkus Reviews

“Set in a fantastical South Asia, this combination of romance, action, and magic will appeal to fans of Sabaa Tahir and Renée Ahdieh. A strong choice for YA fantasy shelves.”
-- School Library Journal

“Cat-and-mouse maneuvering between assassin Esha and reluctant soldier Kunal will hold you in tantalizing suspense in this searing debut exploring love, loss, and destiny. The Tiger at Midnight is as alluring and fearless as its characters.” -- Stacey Lee, award-winning author of Outrun the Moon


“A deliciously twisty cat-and-mouse story that had me racing through the pages. I love stories that challenge their protagonists’ beliefs, and both Esha and Kunal face complex, heart-breaking decisions in their journey to discover both themselves and each other.” -- Natasha Ngan, New York Times bestselling author of Girls of Paper and Fire


“Follow Esha and Kunal on a dangerous journey through lush jungles and bustling cities, where the stakes are life and death, and victory comes at a terrible price. Teerdhala has written a masterful debut full of breathless twists and turns and a romance to ignite the senses.” -- Axie Oh, author of Rebel Seoul
--This text refers to the hardcover edition.

Swati Teerdhala is a storyteller at heart. After graduating from the University of Virginia with a BS in finance and BA in history, she tumbled into the marketing side of the technology industry. She's passionate about many things, including how to make a proper cup of tea, the right ratio of curd to crust in a lemon tart, and diverse representation in the stories we tell. She currently lives in New York City.

Sneha Mathan spent a peripatetic childhood in India, punctuated by a short spell in the Seychelles. Now fixedly based in Seattle, she works as a voice actor and audiobook narrator. Her audiobook work has received four Earphones Awards, and she is a two-time finalist for the Audie Award.

--This text refers to the audioCD edition.

Swati Teerdhala is a storyteller at heart. After graduating from the University of Virginia with a BS in finance and BA in history, she tumbled into the marketing side of the technology industry. She’s passionate about many things, including how to make a proper cup of tea, the right ratio of curd-to-crust in a lemon tart, and diverse representation in the stories we tell. She currently lives in New York City.

4.4 out of 5 stars
4.4 out of 5
54 global ratings
How are ratings calculated?
To calculate the overall star rating and percentage breakdown by star, we don’t use a simple average. Instead, our system considers things like how recent a review is and if the reviewer bought the item on Amazon. It also analyses reviews to verify trustworthiness.

Katy Worden
2.0 out of 5 stars 2.5 starts - it was alright
Reviewed in the United States 🇺🇸 on 18 November 2021
Verified Purchase
I'm giong to be completly honest this book wasn't bad, but it wasn't a good finale to the series. It had major pacing issues. I feel like so much and so little happened because anytime one thing happened eveything else happened. The entire book was just a constant up and down of nothing and everything.

I also feel like so much was left unanswered. Multiple "plots twists" happened that never got addressed, even ones from the other books.

Finally, on the topic of Esha and Kunal. This part is going to span all three books.

In the first book I loved them together, I loved how their characters played off of eachother and encouraged eachother to grow. In the second book a love triangle was introduced with Harun entering the situation. This was also when Esha and Kuran were having major trust and communication issues. By the end of the book I hated Esha and Kuran as a couple I whole heartedly wanted Esha and Harun to end up together even though I knew that wasn't going to happen. In the second book Kuran was getting on my nerves because he was always saying he wasn't a crescent blade, yet he wanted to know every detail of their plans. This is where a large amount of the lies and distrust came in because Kuran felt entilted to the group even though he didn't even want to be a full fledged member. He never once considered the fact that Esha is a co-leader of the crescent blades and as such was handling a lot of information that not eveyrone was privy to, and just because they were close does not mean he was entilted to the information. The third book was much of the same issues with Kunar and Esha, this time the distrust was just due to different topics. At the end I didn't really feel connected to their relationship because everythig was just patched up in the most convinent way without them ever actually talking about their issues. The "fixing" of their relationship was probably one of the worst parts of the book.
Read more
Report abuse
See all reviews
Report an issue
Does this item contain inappropriate content?
Report
Do you believe that this item violates a copyright?
Report
Does this item contain quality or formatting issues?
Report