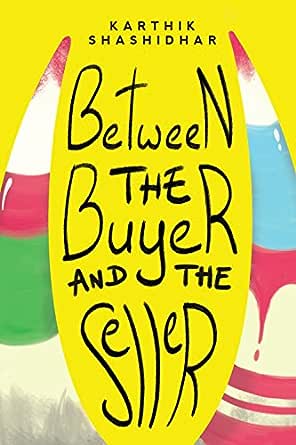 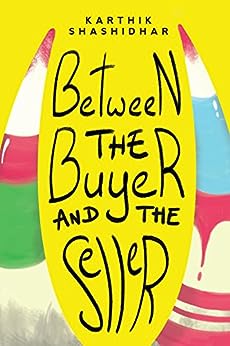 Between the Buyer and the Seller Kindle Edition

4.4 out of 5 stars
4.4 out of 5
22 global ratings
How are ratings calculated?
To calculate the overall star rating and percentage breakdown by star, we don’t use a simple average. Instead, our system considers things like how recent a review is and if the reviewer bought the item on Amazon. It also analyses reviews to verify trustworthiness.

Harsh H. Vora
5.0 out of 5 stars Sharp insights, fresh perspectives
Reviewed in India on 9 September 2017
Verified Purchase
The book provides a fascinating look into the structure of various markets. It discusses how certain structures promote liquidity, which in turn helps make markets efficient, while others discourage liquidity, leading to market failures.

Karthik employs gripping examples, covering a range of eclectic topics -- from the global financial crisis of 2008 to the valuation of football players. Why, for instance, is the market for football players during the transfer seasons highly illiquid despite there being so many clubs and players? How can liquidity explain the heavy discounting strategies employed by the likes of Uber? Are bond markets shallow mainly because of regulatory barriers, or is there a more fundamental reason as well? How can something as basic as explicitly sticking prices on products help traders/businesses sell more?

These and many more questions are answered in an easy-to-read and digestible manner. The discussion throughout is ideology-agnostic.

Karthik also distills the seemingly abstract yet essential economic insights drawn from academic papers in a lucid and comprehensible manner. You may find this in chapter fourteen, for instance, where the author uses fascinating insights from renowned economists Jean Tirole’s and Jean-Charles Rochet’s 2003 paper to explain why some payment platforms such as Paytm succeeded in bringing both merchants as well as customers on board during demonetisation, while many others, including the government-backed BHIM failed.

Whether you are a student, policy analyst, economist, or even an entrepreneur, the book’s sharp insights and fresh perspectives will provide you value for both time and money.
Read more
One person found this helpful
Helpful
Comment Report abuse

Rudra
2.0 out of 5 stars This is a well written text book
Reviewed in India on 28 October 2018
Verified Purchase
This is not a book in a true sense. It is more a well written text book with collations of things from here and there. There is no original idea (nothing that I could atleast). So, if you read it hoping for some great insights - well no, you wont find them. If you want to understand some concepts written in a lucid manner without confusing you - you should go for it. Indeed, all MBA students must read this - especially those who dont know economics.
Read more
Helpful
Comment Report abuse

Sundeep Peddireddy
5.0 out of 5 stars Excellent Treatsie on the Markets
Reviewed in India on 5 September 2017
Verified Purchase
Just finished reading your book. Very well written and found it hard to put it down. Loved your analysis. Your way of explaining things is good. Explained many complicated things like sub prime crisis, in a very simple language. The sections - binders full of women, and about the real estate brokers are very interesting. And that episode of Istanbul's Grand Bazar makes lot of sense.
On the whole, intellectually stimulating and well articulated. Kudos on your debut
Read more
5 people found this helpful
Helpful
Comment Report abuse

Puspangshu Chowdhury
5.0 out of 5 stars A handbook to understand the market
Reviewed in India on 17 September 2017
Verified Purchase
The book provides an excellent insight into the market beyond the conventional lens. Seldom do we come across a book which elucidates, in simplistic language, market failure incorporating the ‘Liquidity’ factor.
The catchy quotes before each chapter provide a refreshing teaser of the content. ‘Between buyer and seller’ tends to provide the ground reality of market functioning through a combination of stimulating and engaging essays rather than establishing an ideological inclination and navigating henceforth.
A must read for everyone who wishes to comprehend the market and its impact through globalization.
Read more
One person found this helpful
Helpful
Comment Report abuse

This book addresses that need of mine to discuss "real" examples that I know of and can relate to.

The first page of the book starts with "Karthik shashidhar lives in London". It hides a lot more than what it says. He has lived large part of his 30+ years in India and which is one of the main reasons why this is a remarkable book. This book is primarily about his reflections and ruminations of "Markets", of everyday transactions across the spectrum - Taxis, Arranged weddings, Tourist markets, Rental housing and the likes - with a strong linkage to his Indian context. See how the cross-roads of technology, regulation and human behavior have shaped these markets. I say this is remarkable because, as he says in his prologue, I cannot place a similar book from the Indian context. If you have a few hours to spare and want some interesting light read to fill them, this book comes highly recommended.

Some additional thoughts on the book

It is a remarkably smooth read (Just like many of his blog posts) and enjoyable.
Many of the examples are known and identifiable, which makes the process of being an equal partner in "reflection" on the framework and concepts great!
I enjoyed quite a few examples -
Senthil from Boys in "Information is wealth" - I was pleasantly surprised when Senthil made a cameo appearance as I was already thinking about this particular scene already while reading the book
Nokia-sriperumbudur example on company towns (It was touted to be the next upcoming big town a decade and a half back - with a new airport, bunch of new high end residential launches etc. but now remains known more for the ex-PM's memorial still!)
The whole Indian arranged marriage, tinder / dating apps and human behavior analysis
... And many more
The best part of the book was Chapter Ten "Slow and steady" wins the race. Where the conventional theory that more "real-time", "noisy", "reactionary" the market is, it would be considered more effective or successful. A slow, batch processed and thoughtful market is often better
It feels like a light book - but I realized that there were many insights which were delectably served in digestable quantities through the book. So a quick re-read / mental summary after you finish reading it once is recommended to savor it completely
Enjoy reading!
Read more
Helpful
Comment Report abuse
See all reviews

RP
4.0 out of 5 stars Good jaunt through market economics with a contemporary Indian flavour
Reviewed in the United Kingdom on 12 September 2017
Verified Purchase
If you were waiting for a book linking real estate markets, the search for a life partner, the story of the financial crisis of 2008, Uber's difficulties in China, or how Torres was overpriced in the football transfer market, this is the book for you. The premise of the book is to examine how markets work and how transactions happen, examined through the lens of various real life markets we encounter. Karthik Shashidhar paints on a large canvas by weaving together details of Nobel prize academic theory from Akerlof and Jean Tirole, Hall's marriage theorem from discrete math, pricing theory of liquid securities and illiquid assets, network effects that favour winner-take-all outcomes, effects of regulation as well as various manifestations of transaction costs in different markets. The book can be both dipped into piecemeal as each chapter is nearly self contained, or read wholesale as a coherent commentary on contemporary economic issues. His insights as an ex-management consultant and journalist/commentator come through in perceptive sections on business and markets, particularly on Indian issues. Good book to have on the shelf whether you are a teenager trying to make sense of the world, a college student of economics bored by dry theory, or a professional wondering if the economics you knew still applies.
Read more
Report abuse

Rahul Maddimsetty
5.0 out of 5 stars A framework for modelling any interaction as a market transaction
Reviewed in the United States on 20 November 2017
Verified Purchase
As a longtime reader of Karthik's excellent blog, I am happy to see that the book retains all of the blog's greatest strengths:
1. his easy conversational writing style,
2. the dizzying breadth of topics on which he trains his uniquely observant and analytical mind,
3. his ability to simplify even the most complex and intimidating principles of economics and finance to explain social phenomena and human behaviour,
4. especially in the Indian context, where it takes far greater fortitude to relinquish the comforting assumption that it's all chaos and to attempt to truly understand what underlies it.

In addition, in the book, Karthik has managed to introduce and thread a consistent theme through all of the material--that of liquidity. After reading the book, I feel like I now have a framework for modelling any interaction as a market transaction and identifying the factors that both ease and hinder liquidity.
Read more
One person found this helpful
Report abuse

Sunil Kowlgi
5.0 out of 5 stars A playbook for anyone buying or selling anything
Reviewed in the United States on 6 October 2017
Verified Purchase
Karthik makes clever observations that demystify the inner workings of various markets — why Uber spends millions of dollars a year on driver and rider subsidies, how the 2008 financial crisis had its roots in increased market liquidity, and the deal making behind Trump Tower being as tall as it is. The book goes into detail about transaction costs and market liquidity in many scenarios, which makes it kind of a playbook for anyone buying or selling anything. I particularly enjoyed the analysis on Indian payment systems after the Great Demonetization experiment of 2016. Check it out, it’s an excellent read.
Read more
One person found this helpful
Report abuse

Rajiv Bharadwaja
5.0 out of 5 stars Fantastic analysis!
Reviewed in the United States on 26 December 2017
Verified Purchase
Fantastic and really enjoyable analysis of market forces! Karthik draws beautiful analogies and delivers a cohesive read - a challenging feat given the variety of topics (ranging from footballer trading to demonetisation) covered. It left me drawing parallels between market transactions and other interactions in life and gave new meaning to primitives in economics (like transaction costs, for example).

A must read for fans of economics, and also analysis in general.
Read more
Report abuse
See all reviews
click to open popover
Unlimited FREE fast delivery, video streaming & more
Prime members enjoy unlimited free, fast delivery on eligible items, video streaming, ad-free music, exclusive access to deals & more.
> Get started
Back to top
Get to Know Us
Connect with Us
Make Money with Us
Let Us Help You
EnglishChoose a language for shopping.
© 1996-2020, Amazon.com, Inc. or its affiliates