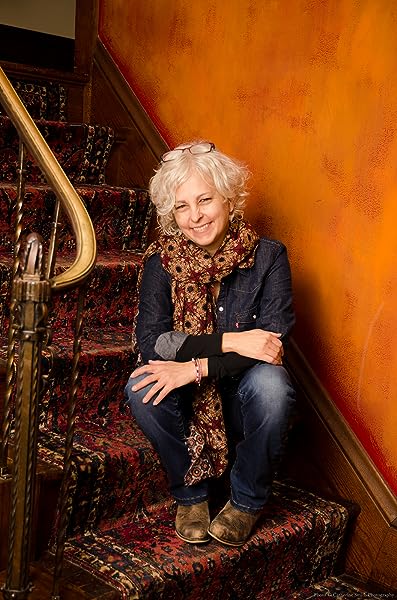 by Kate DiCamillo (Author), Sophie Blackall (Illustrator)
4.6 out of 5 stars 49 ratings
See all formats and editions
Sorry, there was a problem loading this page. Try again.

In a time of war, a mysterious child appears at the monastery of the Order of the Chronicles of Sorrowing. Gentle Brother Edik finds the girl, Beatryce, curled in a stall, wracked with fever, coated in dirt and blood and holding fast to the ear of Answelica the recalcitrant goat. As the monk nurses Beatryce to health, he uncovers her dangerous secret – one that imperils them all.

And so it is that a girl with a head full of stories must venture into a dark wood in search of the castle of a king who wishes her dead. But should she lose her way, Beatryce knows that those who love her – a wild-eyed monk, a man who had once been king, a boy with a terrible sword and a goat with a head as hard as stone – will never give up searching for her. And to know this is to know everything.

Absolutely extraordinary. Every time I read a Kate DiCamillo book I'm blown away! Little Beatryce stole my heart […] It lifted me out of lockdown and reignited a childlike wonder in the power of stories (and love) to change the world. It's a beauty of a book. ― Abi Elphinstone

Everything she writes glitters with ideas […] The Beatryce Prophecy, (is) a highly original tale […] In the course of the story, written in a distinctive, compulsive style that sucks you in like a literary vacuum cleaner, DiCamillo, based in Minneapolis, raises big questions about the education of girls, the sort of world we want to inhabit, how we should live in it and what sort of qualities one should have to lead it. […] DiCamillo has an inbuilt lightness of touch and a way with plot as Beatryce endeavours to return a sword to the king, free her mother from his tower and teach Jack how to read. ― The Times

I fervently hope it reaches as wide a young audience as it deserves, to live as long inside them. ― The Big Issue

Author of the Newbery Medal-winning The Tale of Despereaux and the bestselling Because of Winn-Dixie, now a major Hollywood film!

Kate DiCamillo’s writing journey has been a truly remarkable one. She grew up in Florida and moved to Minnesota in her twenties, when homesickness and a bitter winter led her to write Because of Winn-Dixie — her first published novel, which became a runaway bestseller and snapped up a Newbery Honor. The Tiger Rising, her second novel, was also set in Florida and went on to become a National Book Award finalist. Since then, the best-selling author has explored settings as varied as a medieval castle and a magician’s theater while continuing to enjoy great success, winning two Newbery Medals and being named National Ambassador for Young People’s Literature. She now has almost 30 million books in print worldwide.

Now, for the first time ever, Kate DiCamillo is returning to the world of a previous novel to tell us more about a character whom her fans already know and love. In Louisiana’s Way Home, set two years after the events of National Book Award finalist Raymie Nightingale, she picks up the story of Raymie’s friend Louisiana Elefante, who uncovers difficult truths about her past — and makes choices that will determine her future.

Kate DiCamillo’s books’ themes of hope and belief amid impossible circumstances and their messages of shared humanity and connectedness have resonated with readers of all ages around the world. In her instant #1 New York Times bestseller The Miraculous Journey of Edward Tulane, a haughty china rabbit undergoes a profound transformation after finding himself face down on the ocean floor — lost and waiting to be found. The Tale of Despereaux — the Newbery Medal–winning novel that later inspired an animated adventure from Universal Pictures — stars a tiny mouse with exceptionally large ears who is driven by love to become an unlikely hero. The Magician’s Elephant, an acclaimed and exquisitely paced fable, dares to ask the question What if? And Kate DiCamillo’s second Newbery Medal winner, Flora &amp; Ulysses, was released in 2013 to great acclaim, garnering five starred reviews and an instant spot on the New York Times bestseller list.

Born in Philadelphia but raised in the South, Kate DiCamillo now lives in Minneapolis, where she faithfully writes two pages a day, five days a week.

4.6 out of 5 stars
4.6 out of 5
49 global ratings
How are ratings calculated?
To calculate the overall star rating and percentage breakdown by star, we don’t use a simple average. Instead, our system considers things like how recent a review is and if the reviewer bought the item on Amazon. It also analyses reviews to verify trustworthiness.

There are 0 customer reviews and 49 customer ratings.