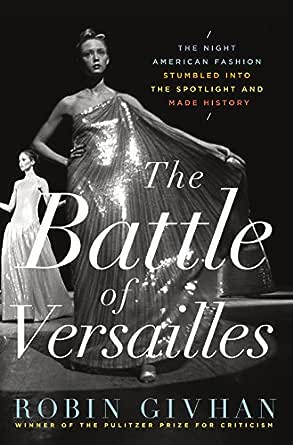 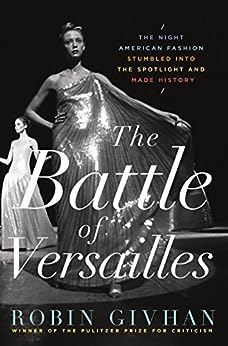 The Battle of Versailles: The Night American Fashion Stumbled into the Spotlight and Made History Kindle Edition

ROBIN GIVHAN is the fashion critic of The Washington Post, where she covers the news, trends, and business of the international fashion industry, and the former style correspondent for Newsweek and The Daily Beast. She has also contributed to New York and Vogue, among other magazines. In 2006, she won the Pulitzer Prize in criticism for her fashion coverage. The Battle of Versailles is her first book. --This text refers to the hardcover edition.

“Givhan handles the story-and all its gossip, backbiting, and raging egos-with meticulous dexterity. She has an eye for the absurd and flamboyant detail...some [of which] seem astonishing in retrospect. The Americans...stunned the crowd that night... with their success in capturing the spirit of the modern woman through both their clothes and the pure energy they poured into the show.” ―Thessaly La Force, The New York Times Book Review

“In her debut book, Pulitzer Prize-winning Washington Post fashion critic Givhan delivers a delightful, encyclopedic exploration of the players and leaders in the field.... Readers need not be fashion mavens to enjoy this entertaining episode of history, enhanced by Givhan's effortless ability to illustrate the models and designers (particularly Lambert) who changed how we dress.” ―Kirkus Reviews

“Givhan paints a captivating portrait of the ethos of the era, from race riots and the Kerner Report to a "cultural... fascination with black identity" and glamorous nights at the disco, with juicy tales about arrogant designers acting out. While candid about the designers' faults, this is largely a glowing tribute to five iconic artists and their legacy in the fashion world.” ―Publishers Weekly

“It was a big deal when American Fashion went to Versailles…who better than Robin Givhan to tell this captivating story?” ―Diane von Furstenberg

“Reality TV has nothing on The Battle of Versailles. The year is 1973, and five legendary French couturiers face off against a team of their Seventh Avenue counterparts. There are hissy fits, liveried footmen, a party at Maxim's, and (prefiguring "Spinal Tap") a backdrop mistakenly measured in feet instead of meters. Halston refers to himself in the third person. A motley supporting cast that includes Josephine Baker, Liza Minnelli, Kay Thompson, Rudolf Nureyev, showgirls from the Crazy Horse, and a phalanx of dazzling black American models creates a spectacle, and the gratin of Paris society turns out. In this picturesque account, Robin Givhan weaves together the tectonic social and cultural shifts that set the stage for an epic fashion showdown.” ―Holly Brubach, author of A DEDICATED FOLLOWER OF FASHION

“In The Battle of Versailles, Pulitzer-prizing winning fashion critic Robin Givhan expertly captures the players and the scene of a turning point in both fashion and American culture, showing that chutzpah and savviness count as much as craftsmanship and refinement. With in-depth reporting and her warm, informative voice, Givhan proves that a fashion show is about far more than clothes. Indeed, as this fascinating book shows, it can spark a social revolution.” ―Dana Thomas, author of the New York Times bestselling DELUXE: HOW LUXURY LOST ITS LUSTER

“Robin Givhan's book recounts how the French fashion establishment in November 1973 fell in love with American couture. The Battle of Versailles tells the behind-the-scene story of the night that wildly cheering French critics gave a standing ovation to five American designers and their stunning black models. Givhan provides readers with both a front row and backstage view of the drama. It's a wonderfully fun read of how a few daring Yanks won recognition in world fashion.” ―George Taber, author of THE JUDGMENT OF PARIS

“The Battle of Versailles is a fashion primer, a history lesson and a juicy tale with colorful and insightful character studies.” ―Newsday

“As she sets up the saga of the legendary Versailles show, Givhan miraculously gives enough history and back story to paint a backdrop for the action in her swiftly-moving tale without burdening the plot with unnecessary details.” ―The Boston Globe

“Fashion critic Robin Givhan dismantles the story of how sexual, racial and gender tensions in the U.S. helped create the perfect environment for American designers to burst upon the exclusive French fashion scene one fateful night in 1973.” ―The Chicago Tribune

“Robin Givhan's enthusiastic history "The Battle of Versailles" is an effort to do for fashion what George Taber's "The Judgment of Paris" did for wine: focus on a broad cultural shift through the lens of a single occasion... With a huge cast of characters and a wealth of detail, Givhan leaves no scrap of information out...Perhaps, as with all great parties, you just had to be there.” ―The Washington Post

“A vivid account of the 1973 runway event at Versailles that traces how then-emerging designers, including Oscar de la Renta and Anne Klein, helped establish America as a dominant force in international style.” ―NPR

--This text refers to the hardcover edition.

4.7 out of 5 stars
4.7 out of 5
78 global ratings
How are ratings calculated?
To calculate the overall star rating and percentage breakdown by star, we don’t use a simple average. Instead, our system considers things like how recent a review is and if the reviewer bought the item on Amazon. It also analyses reviews to verify trustworthiness.

Daniel Ord
4.0 out of 5 stars I didn't expect to get so caught up in the history
Reviewed in Germany on 23 June 2020
Verified Purchase
This is more than the story of a fashion event. It mixes history and social mores in both the US & France across the 50s, 60s, 70s and explains why fashion mores changed over time.

Jc De Greef
5.0 out of 5 stars A must read for who's interested in fashion
Reviewed in Germany on 26 May 2015
Verified Purchase
I doubt if non-fashion readers will appreciated it that much, but for everyone in Fashion it is a terrific must read and tells a lot about the 70s and the challenge of equal rights for blacks and whites in couture- circles
Read more
Report abuse

stephanie gairdner
4.0 out of 5 stars enjoying
Reviewed in Canada on 23 May 2015
Verified Purchase
Very happy with my book.
Read more
Report abuse
See all reviews
click to open popover
Unlimited FREE fast delivery, video streaming & more
Prime members enjoy unlimited free, fast delivery on eligible items, video streaming, ad-free music, exclusive access to deals & more.
> Get started
Back to top
Get to Know Us
Connect with Us
Make Money with Us
Let Us Help You
EnglishChoose a language for shopping.
© 1996-2020, Amazon.com, Inc. or its affiliates