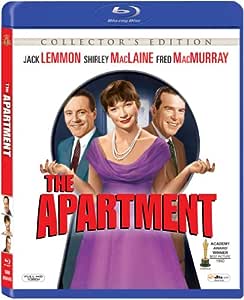 Pay on Delivery (POD) includes Cash on Delivery (COD) as well as Debit card / Credit card / Net banking payments at your doorstep.
In Stock.
Sold by Excel Innovators (4.8 out of 5 stars | 373 ratings) and Fulfilled by Amazon.

Fulfillment by Amazon (FBA) is a service we offer sellers that lets them store their products in Amazon's fulfillment centers, and we directly pack, ship, and provide customer service for these products. Something we hope you'll especially enjoy: FBA items qualify for FREE Shipping and Amazon Prime.

If you're a seller, Fulfillment by Amazon can help you grow your business. Learn more about the program.

A man tries to rise in his company by letting its executives use his apartment for trysts, but complications and a romance of his own ensue

As of November 1, 1959, mild mannered C.C. Baxter has been working at Consolidated Life, an insurance company, for close to four years, and is one of close to thirty-two thousand employees located in their Manhattan head office. To distinguish himself from all the other lowly cogs in the company in the hopes of moving up the corporate ladder, he often works late, but only because he can't get into his apartment, located off of Central Park West, since he has provided it to a handful of company executives - Mssrs. Dobisch, Kirkeby, Vanderhoff and Eichelberger - on a rotating basis for their extramarital liaisons in return for a good word to the personnel director, Jeff D. Sheldrake. When Baxter is called into Sheldrake's office for the first time, he learns that it isn't just to be promoted as he expects, but also to add married Sheldrake to the list to who he will lend his apartment. What Baxter is unaware of is that Sheldrake's mistress is Fran Kubelik, an elevator girl in the building who Baxter himself fancies. In turn, Sheldrake has no idea of Baxter's own interest in Fran. And Fran, who is in love with Sheldrake, has no idea that she is only the latest in a long line of Sheldrake's mistresses, that Sheldrake has no intention of leaving his wife for her, and that the apartment belongs to Baxter, who she likes as a friend. As some of these facts come to light on Christmas Eve, one of the three makes a unilateral decision. That decision sets off a series of events over the course of the next week which makes each of the three examine what he/she really wants which in turn may be incompatible with the other two. They are helped along the way by Dobisch, Kirkeby, Vanderhoff and Eichelberger who are now feeling neglected as Baxter no longer needs their assistance in moving up, by Miss Olsen, Sheldrake's long serving secretary who was also once his mistress, and by Dr. Dreyfus, a physician and one of Baxter's many exasperated neighbors who believes Baxter is a playboy based on all the noise he hears in Baxter's apartment and the plethora of empty liquor bottles Baxter seems to be always discarding.

Ray
5.0 out of 5 stars A Billy Wilder Classic in a very good blu-ray disc.......Highly Recommended!
Reviewed in India on 28 February 2015
Format: Blu-ray
The movie is a classic directed by Billy Wilder. It won the Best Picture Oscar in 1960. All the lead actors are brilliant. It could be called a rom-com if one were to put it in a genre. Fans of Mad Men could clearly spot how this movie inspired the production design and costumes for that series. Even the hindi movie Life in a Metro had a plot featuring Sharman Joshi lifted from this movie. And inspite of being a 54 year old movie, it doesn't feel dated. Its a must watch for all movie-buffs.

The movie looks beautiful in HD. It has stunning black and white cinematography by Joseph LaShelle. If someone hates black and white movies, the video quality on this disc could change their opinion. On the other hand, the sound on the disc is remixed in DTS HD MA 5.1 from the original mono track. The original mono track is not included on the disc. For a dialogue-driven film, it sounds good and the dialogues can be heard clearly. The surrounds are rarely used, only for the busy office environment sounds and background score. The extras are few, but all the extras from the international blu-ray releases are there. They include a Commentary with Film Historian Bruce Block, Inside The Apartment (a good behind the scenes feature), Magic Time - The Art of Jack Lemmon and the trailer.