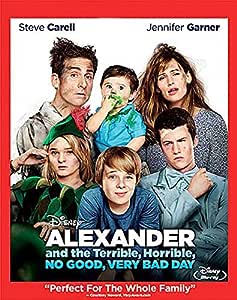 Alexander and the Terrible, Horrible, No Good, Very Bad Day

Pay on Delivery (POD) includes Cash on Delivery (COD) as well as Debit card / Credit card / Net banking payments at your doorstep.
Available from these sellers.
2 new from ₹ 499.00

Alexander's day begins with gum stuck in his hair, followed by more calamities. Though he finds little sympathy from his family and begins to wonder if bad things only happen to him, his mom, dad, brother, and sister all find themselves living through their own terrible, horrible, no good, very bad day.

Ruth Paul
4.0 out of 5 stars Great for a Friday evening with some Popcorn
19 January 2016
Format: DVDVerified Purchase
A little cliched and undercooked, but a good fun family romp nevertheless. Steve Carrell and Jennifer Garner were ideal for the roles.
Read more
Helpful
Comment Report abuse

westflower
4.0 out of 5 stars Cute movie
7 October 2017 - Published on Amazon.com
Verified Purchase
Cute movie! Good plot, especially seeing as nobody has everything go perfectly. Jennifer Garner is stressed with her job and taking care of the family, and Steve Carell is the at-home dad, in between jobs and searching for one. Some hilarious things throughout the movie. My kids loved it. One caution is the word penis in there, though, if anyone is really not ready to explain that for whatever reason. It's not being used in a bad way. Easier for me with boys, we kept on going! Good theme and I like Steve Carell and Jennifer Garner.
Read more
9 people found this helpful

MMS
5.0 out of 5 stars Great family movie
30 July 2016 - Published on Amazon.com
Verified Purchase
This movie is completely relatable for any family. Everyone has had one of those days where nothing goes right and you just need to kick a trash can.
Steve Carrell gives the perfect performance. You can completely relate to the events unfolding in his day, especially if you have young children and although many of us wouldn't expect these events to occur, they absolutely could at the drop of a dime.
The movie teaches a nice just push through it message. Positivity is important when dealing with a bad day.
This is a great family movie, I enjoyed it immensely.

DOROTHY CARRAS
5.0 out of 5 stars Alexander and the very goid movie
19 December 2018 - Published on Amazon.com
Verified Purchase
Very funny Jennifer Garner/Steve Carell flick about the boy frrom thw 1972? book (Judith Viuorst, who appared at the 2014 preview for it) who gets a very( (check the title!) bad day. Just like the title says. only thing is, it's a little TOo bad, but in a very surprsingly way, that we all know in our own bad days in our veyr own real lives! We get Australa, Jennifer Coolidge (most famously perhsaps, the AMERICAN PIE series), Dick Van Dyke (as..!) - you'll spot them..--a crazy resturant trip, Bella Thorne..>!!(somewhat like some of other characters, such as THE DUFF's mean girl). AN more!

Thomas R. Von Malder
4.0 out of 5 stars Alexander and the Terrible, Horrible
1 March 2015 - Published on Amazon.com
Verified Purchase
Alexander and the Terrible, Horrible, No Good, Very Bad Day (Disney, PG, 81 min.). Looks like the filmmakers went for the world's longest title. The good news is the film is funny enough to sustain the title. thanks in great part to Steve Carell as the father, Ben Cooper, and all the physical things that go wrong throughout the day. This is a key day for the family as well: Ben, who has been unemployed for seven months after being laid off from the aerospace industry, has a job interview; daughter Emily (Kerris Dorsey) is debuting as Peter Pan in the school play; big brother Anthony (Dylan Minnette) is taking his driving test and then heading to Junior Prom with one of the hottest girls in school; and Alexander (Ed Oxenbould), who always seems to be having a horrible day, is turning 12 and is going to have a birthday party that no one is going to attend because classmate Philip Parker, whose birthday is not actually until next week, has moved his spectacular birthday party up to the same night.
After a day that included him accidentally setting a fire in chemistry class, a depressed Alexander makes a birthday sundae with a candle and, when he blows out the candle, wishes that his family will experience a horrible day like he does. When the family wakes up in a few hours, it seems like Alexander's wish has come true -- with a vengeance. Alexander's baby brother loses an encounter with a green marker; sister Peter Pan imbibes too much cough medicine; dad has his own fire issues while trying to impress potential bosses at a hibachi restaurant; mom trying to stop Dick Van Dyke from reading from a children's book with a bad misprint at a press event; and Anthony has the funniest driving test ever. What impresses is that the family's tight bond continues throughout the disastrous day, and ultimately triumphs.
Bonus features include book author Judith Viorst and her son, Alexander, reminiscing about the children's book (5 min.); director Miguel Arteta and cast discussing the Outback-themed birthday party (7 min.); Oxenbould's brief video diary (6 min.); bloopers (4 min.); and the "Hurricane" music video by The Vamps. Grade: film 3.25 stars; extras 2 stars
Read more
4 people found this helpful

J. W. Byrn
5.0 out of 5 stars great message (especially if your kid has anxiety)
13 July 2019 - Published on Amazon.com
Verified Purchase
My kid can focus on the worst things and stress about what could happen. This film is that kind of day on steroids and everyone is ok at the end. It helped my kid seeing this and my spouse and I laughed as so many things were a little too close to home in our parenting adventure.
Read more
One person found this helpful
Go to Amazon.com to see all 1,785 reviews 4.4 out of 5 stars
Unlimited FREE fast delivery, video streaming & more
Prime members enjoy unlimited free, fast delivery on eligible items, video streaming, ad-free music, exclusive access to deals & more.
> Get started
Back to top
Get to Know Us
Connect with Us
Make Money with Us
Let Us Help You
EnglishChoose a language for shopping.
© 1996-2020, Amazon.com, Inc. or its affiliates