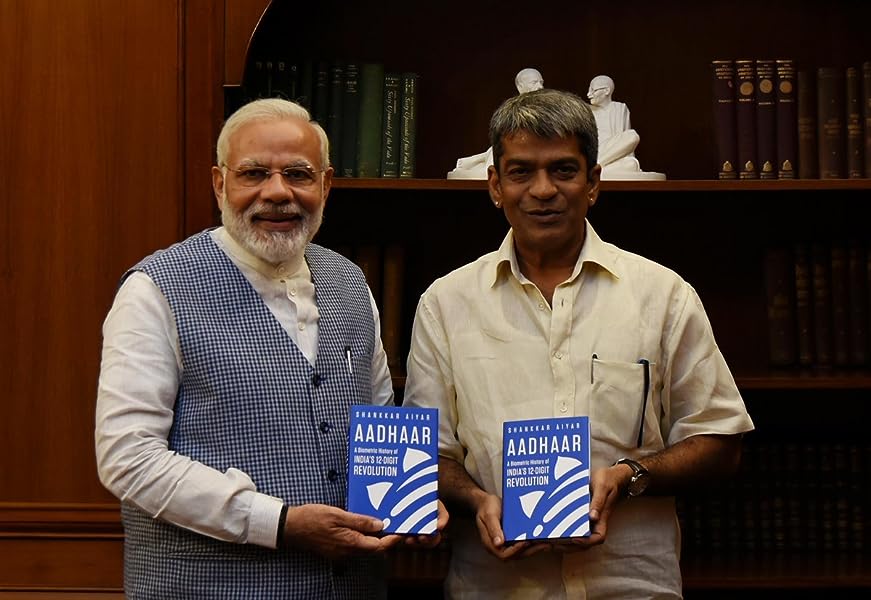 by Shankkar Aiyar (Author)
4.3 out of 5 stars 88 ratings
See all formats and editions
Sorry, there was a problem loading this page. Try again.

A complex tale of idealism, negotiation and realpolitik records how a revolution was engineeredAadhaar was born in July 2009, yoking modern technology and management expertise to political will. The biometric-based unique identification system, built by tech czar Nandan Nilekani and his team of innovators, was designed to enable subsidies and social spends reach their true destination, plug institutional corruption and save trillions of tax-rupees. In July 2017, Aadhaar is 1.15 billion identities and growing.In Aadhaar: A Biometric History of India’s 12-digit Revolution, senior journalist Shankkar Aiyar traces the history of this ambitious, controversial undertaking. He speaks with President Pranab Mukherjee, Prime Ministers Narendra Modi and Manmohan Singh, P. Chidambaram, Yashwant Sinha, Rahul Gandhi and others to document how politicians with diametrically opposed ideologies were equally determined to propel Aadhaar.Aiyar maps how Aadhaar’s application expanded beyond its original intent. He researches its ups, downs and turnarounds; discusses the concerns of activists and bureaucrats on potential misuse of the database for state surveillance; raises the urgent need for a data-protection and privacy law and spells out the solutions. An unusual contemporary dramatization, this book is a breathless ride through recent changes in India’s political and economic landscape. ''
Read more
Previous page
Next page

His path-breaking book Accidental India fetched him acclaim as a public intellectual. A journalist for over three decades, Aiyar has covered every parliamentary election since 1984. His 1991 scoop on India pledging its gold reserves drew world attention to the crisis in the economy which consequently compelled liberalisation. Aiyar has analysed every Budget since liberalization.

As a columnist Aiyar specializes in the interface of politics and economics. He has authored a study on India’s socio-economic fault lines and its hundred worst districts. His investigation on twenty-five years of political corruption is part of an anthology. He has been a Wolfson Chevening Fellow at Cambridge University where he studied the lifecycles of emerging economies. Aiyar is a Visiting Fellow at the IDFC Institute.

He is currently working on his third book and policy research on evolving demographics and implications for the next economy.

His path-breaking book Accidental India fetched him acclaim as a public intellectual. A journalist for over three decades, Aiyar has covered every parliamentary election since 1984. His 1991 scoop on India pledging its gold reserves drew international attention to the crisis in the economy which consequently compelled liberalization. Aiyar has analyzed every Budget since 1991.

As a columnist Aiyar specialises in the interface between politics and economics. He has authored a study on India’s socio-economic fault lines and its hundred worst districts. His investigation on twenty-five years of political corruption is part of an anthology. He has been a Wolfson Chevening Fellow at Cambridge University where he studied the life cycles of emerging economies. Aiyar is a visiting fellow at the IDFC Institute. He is currently working on his third book and conducting policy research on evolving demographics and their implications for the next economy.

Watch an exclusive interaction about the book with DD National:

4.3 out of 5 stars
4.3 out of 5
88 global ratings
How are ratings calculated?
To calculate the overall star rating and percentage breakdown by star, we don’t use a simple average. Instead, our system considers things like how recent a review is and if the reviewer bought the item on Amazon. It also analyses reviews to verify trustworthiness.
View Image Gallery

Amazon Customer
5.0 out of 5 stars most comprehensive material about Aadhar
Reviewed in India on 31 October 2017
For indepth understanding of the subject aadhar... the complexities involved and challenges faced by authorities are elaborately discussed. The future scope of AADHAR is also explained. Must read looking at the present scenario of aadhar...
Images in this review

Ramkumar R
5.0 out of 5 stars TLDR : Social, Political, Technical History of Aadhar with an insight into the issues of security and privacy. 5/5
Reviewed in India 🇮🇳 on 2 January 2018
Verified Purchase
Book Review : Aadhaar A Biometric History of India's 12-Digit Revolution by Shankar Aiyar

TLDR : Social, Political, Technical History of Aadhar with an insight into the issues of security and privacy. 5/5

This was a quick and simple read (1 day).

The book talks about the genesis of the Aadhaar idea, setting up of UIDAI, the joining of hands of bureaucracy and politicians and technocrats and business people, the technological challenges (de-duplication), the roll-out procedure, the departmental and electoral politics and finally the judicial oversight into the UID. Of particular interest are the tidbits on why there is an Aadhaar card, who coined the term Aadhar and why, how various states (including Gujarat) responded to UID, how the Aadhar worked under UPA and NDA and the various subsidy programmes like Direct Benefit Transfer that benefited. To be fair the also highlights the some times hilarious and some times heart breaking mishaps with Aadhar which we hope reduce in future.

In hindsight having more than 90% Indians on an Aadhar platform (JAM model : Jan Dhan+Aadhar+Mobile) is going to be path breaking given the digital future. I also wonder why Goverment cannot simply open a Bank Account with the 12 digit Aadhar number as proposed.

Lastly, the author makes a case of why privacy and security will be key in the future as has been the case in many Western countries.

I wish best of luck to the Aadhar programme.

Venkateshwaralu Srikarunyan
5.0 out of 5 stars A must read for every Tech Savvy Entrepreneurial Indian :)
Reviewed in India 🇮🇳 on 8 October 2017
Verified Purchase
Like many, I just can't emphasize more on how well this was researched and presented. Unlike most nations in the world, getting something done in India is no simple task. The author has done the justice in capturing the struggle and hard work that has gone in accomplishing the goal of making a success out of Aadhaar. This definitely is an inspiration for me. Mr. Nandan Nilekani is no doubt poured himself into this goal of creating Unique Identification System for India and along the way has set an example for future generations to look upon proudly.
Read more
5 people found this helpful
Helpful
Report abuse

Nirbhay
4.0 out of 5 stars Good book
Reviewed in India 🇮🇳 on 25 February 2019
Verified Purchase
The book provides a sneak into the making of Aadhar - a classic success story of public - private partnership.
Provides lots of insight of how Govtt works and how there are some great beaurocrat in the system who immensely helped in making Aadhar a success story.
Read more
Helpful
Report abuse

riya
5.0 out of 5 stars Satisfactory
Reviewed in India 🇮🇳 on 23 May 2021
Verified Purchase
Satisfactory read !!! Not so much lexical errors as given in reviews ....Liked Aiyar writing style ....
Read more
Helpful
Report abuse

Ranga
4.0 out of 5 stars Good coverage of the aadhaar evolution
Reviewed in India 🇮🇳 on 15 October 2017
Verified Purchase
. Good read of the aadhaar and its evolution. Last chapter on the Privacy law was good too, makes you want to read more on the same. There is little mention of the technology stack of the aadhaar, that would have been a good addition.
Read more
2 people found this helpful
Helpful
Report abuse

Suryakrishnamurty
3.0 out of 5 stars Can be read once.
Reviewed in India 🇮🇳 on 23 September 2017
Verified Purchase
The book doesn't mention how a flawed business model resulted in a lot of data not being uploaded by enrolment operators in Phase 1 as operators were not paid by Enrolment Agencies becoming a serious threat to data security. Also the software for enrolment was very poor in Phases 1 and 2 with the geographic database being hopelessly wrong due to crowdsourcing.
The State Election Commissions are independent of the ECI and not subordinate to it.
Read more
One person found this helpful
Helpful
Report abuse

Joseph T Tharakan
5.0 out of 5 stars Wonderful Narration
Reviewed in India 🇮🇳 on 23 October 2017
Verified Purchase
I started reading this book to know more about Aadhar. But it tells not about the project but how such initiatives take shape within the public governance structure. The hurdles it has to pass through. I feel it as more of an inspirational story. Shankar has done his homework properly and this book is a true tribute to everyone who has worked hard behind this massive project.
Read more
4 people found this helpful
Helpful
Report abuse
See all reviews